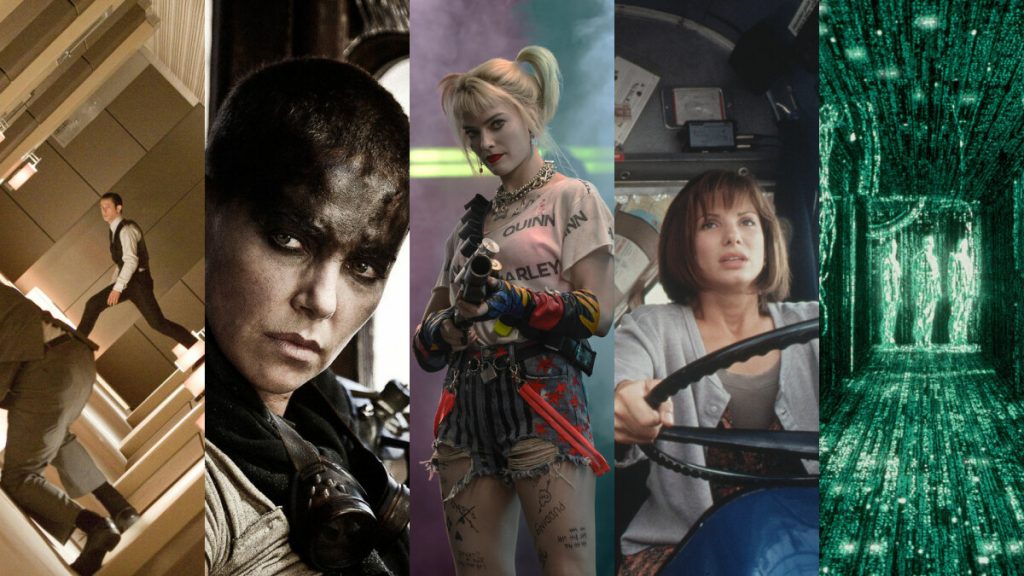 Want to shake off the doldrums of a long day with something bone-rattlingly exciting? You need an action movie stuffed with fantastic fights, stupendous stunts, calamitous chases, and climactic spectacle so bonkers it’ll blow your mind. Whether your interests lean to science-fiction, fantasy, cop-drama, disaster flicks, superheroes, heist thrillers, mythic monsters, family-friendly adventure, or R-rated violence, we’ve got you covered with a top-notch collection of awesome movies.

Here are the 10 best action movies on HBO Max.

J.R.R. Tolkien’s high-fantasy novel is brought to vivid life by Peter Jackson’s Lord of the Rings Trilogy, which began in 2001 with this widely acclaimed first chapter. In the mystical realm of Middle-earth, a humble Hobbit known as Frodo Baggins (Elijah Wood) takes on an epic quest to destroy a mighty token sought by a powerful sorcerer. Hunted by dark forces, Frodo finds strength in the fellowship that surrounds him. Noble elves, brooding warriors, churlish dwarves, wise wizards, and hungry Hobbits join in the battle to save their world in a celebrated film series that had audiences and critics in awe. Best yet, you can make a DIY movie marathon by adding The Two Towers and The Return of the King to your watch list.

How to watch: The Lord of the Rings: The Fellowship of the Ring is streaming on HBO Max.

Adapted from Michael Crichton’s science-gone-awry novel of the same name, Jurassic Park offers audiences an exhilarating — and sometimes terrifying — tour through an amusement park where dinosaurs roam and hunt. At first, this seems like a dream come true to paleontologist Dr. Alan Grant (Sam Neill) and paleobotanist Dr. Ellie Sattler (Laura Dern). But once the Tyrannosaurus rex gets loose, this walk in the park becomes a real nightmare. Director Steven Spielberg awed audiences not only with the Academy Award-winning visual effects that resurrected long-extinct dinos, but also with masterfully paced action sequences. Many of these are nail-biting escape scenes, with the human heroes fleeing the jaws and claws of apex predators. Thanks to captivating characters, life-or-death stakes, and clever girls, each was a showpiece that had critics and audiences roaring with excitement. Simply put, this 1993 blockbuster hasn’t aged a day.

How to watch: Jurassic Park is streaming on HBO Max.

Can you see the world inside the code?
Credit: Warner Bros/Village Roadshow Pictures/Kobal/Shutterstock

It’s the 1999 action movie that changed the game. Keanu Reeves stars as Neo, a hacker who tumbles down a digital rabbit hole to discover the world he knows is a simulation. Joining forces with a band of rebels (that includes Laurence Fishburne and Carrie-Anne Moss), he seeks to topple the robot tyrants that have enslaved humanity. This quest leads to eye-popping fights, breath-snatching escapes, and mind-bending reveals. Writing and directing duo Lana and Lilly Wachowski blew critics and audiences away with their incredible vision. Their disturbing sci-fi dystopia is snugly wrapped in a captivating cyberpunk aesthetic that’s as cool as Reeves is in a long black trench coat. On top of all this, the Wachowskis presented their ground-breaking visual effect, “bullet time,” which slowed action down but gave a bevy of angles to make every hit land harder. You can keep the thrills going by completing the trilogy: The Matrix Reloaded and The Matrix Revolutions are also available on HBO Max.

How to watch: The Matrix is streaming on HBO Max.

When a devastating alien invasion hits Earth, it’s up to a motley crew of American heroes to save the day. Co-written and directed by Roland Emmerich, Independence Day follows a snarky satellite engineer (Jeff Goldblum), a scrappy single mom (Vivica A. Fox), a wacky Vietnam War vet (Randy Quaid), a cocky yet charismatic fighter-pilot (Will Smith), and a brave president (Bill Pullman) through a globe-rattling battle for the future of mankind. A series of stellar action set pieces deliver massive explosions, narrow escapes, breath-taking air battles, and a satisfying punch right in the face of an attacking extraterrestrial (“Welcome to Earth!”). As masterfully executed as it was ambitious, this 1996 film won praise from critics, an Academy Award for Best Visual Effects, and the love of audiences worldwide. Plus, it minted Will Smith as an action star and pushed a trend of big-budget disaster movies. However, few could compete with the jaw-dropping spectacle found in this holiday hit.

How to watch: Independence Day is streaming on HBO Max.

In 1998, Hong-Kong-born Jackie Chan’s star was still on the rise in the U.S. when he broke out in this mayhem-rich movie. Director/producer Brett Ratner thought Chan’s mastery of martial arts, audacious stunts, and comedic timing would make him a perfect match for a buddy comedy. Cultures clash hilariously in this smash hit, which co-stars a high-kicking Chan and high-energy comedian Chris Tucker as a couple of cops paired up to rescue the kidnapped daughter of a Chinese diplomat from a vicious crime lord. As packed with wise-cracking as it is butt-kicking, Rush Hour had audiences bursting with cheers and laughter, pushing both of its leads into the Hollywood firmament. If you can handle triple the fun, marathon this hit with its whiz-bang sequels, Rush Hour 2 and Rush Hour 3.

How to watch: Rush Hour is streaming on HBO Max.

HBO Max has a whole hub dedicated to DC adaptations, meaning you can enjoy everything from The Justice League to Constantine to a slew of Batman movies and animated offerings. Subscribers are spoiled for choice. But our pick for the movie most jam-packed with bonkers action is 2020’s Birds of Prey: And the Fantabulous Emancipation of One Harley Quinn. The Suicide Squad sidekick finally gets her solo outing, and director Cathy Yan dreamed up an incredible three-ring circus of action scenes, ranging from bone-snapping bar brawls to glitter-bombed prison breaks, a maniacal musical number, a car chase on roller skates, and a team-up showdown that is explosively awesome. Margot Robbie stars alongside Mary Elizabeth Winstead, Rosie Perez, Jurnee Smollett-Bell, and Ella Jay Basco in an R-rated superhero movie that’s audaciously violent, unapologetically sexy, and as wild fun as a Harley movie demands. (For bonus thrills, check out the TV-MA cartoon series Harley Quinn.)

How to watch: Birds of Prey is streaming on HBO Max. There’s a lot of layers to keep up with, but wild set pieces like this make it go down smooth.
Credit: Warner Bros/Kobal/Shutterstock

Writer/director Christopher Nolan has elevated the action genre with sophisticated and spectacular films like Tenet and his Dark Knight Trilogy. However, his most inventive action movie (so far) has been the reality-bending heist flick Inception. Suited up and set to stun, Leonardo DiCaprio heads a crew of specially trained thieves, who scheme to commit corporate sabotage through a consciousness-invading technology. Simply put, they’re going to break into the dreams of a powerful heir to bend him to their will. That is, if the dream worlds around them don’t kill them first. Within this premise, Nolan created a metropolis that can fold into itself; a hotel that tumbles like a slinky; dark twists; tricky totems; and a finale that still has tongues wagging. Bringing bravado alongside DiCaprio is an all-star cast that includes Joseph Gordon-Levitt, Elliot Page, Tom Hardy, Ken Watanabe, Marion Cotillard, and Cillian Murphy.

How to watch: Inception is streaming on HBO Max.

This movie had no right to be this damn awesome. The fourth installment of a franchise that had been fallow for 30 years, Mad Max: Fury Road was plagued by production problems and rumors of tensions onset. Yet, upon its release in 2015, not only were audiences and critics blown away, but so was the Academy, awarding six Oscars as well as nominations for Best Picture and Best Director. Helmer George Miller turned the story of a post-apocalyptic loner (Tom Hardy) into an operatic epic, exploding with pulse-pounding car chases, frenzied escapes, jaw-dropping violence, and flame-throwing guitar solos. On top of all that exhilarating carnage, this outrageous sequel introduced Imperator Furiosa (Charlize Theron), a heroine so badass that she became iconic from her first sneer. Witness her.

Pop quiz, hot shot: Which action headliner made our list twice? Yup. It’s Keanu Reeves, who is truly one of a kind. In this 1994 hit, the steely hunk stars as a headstrong LAPD officer who sets out to stop a mad bomber (a cackling Dennis Hopper) but ends up boarding a city bus trigged to explode. This hostage situation isn’t as simple as stopping the bus, because if the speed goes below 50 miles per hour: KABOOM! Bomb-busting has never been so intense. With jolting car chases, shocking collisions, frenetic pacing, and plenty of fire power, director Jan de Bont delivered top-notch suspense. But what gave this thrill ride extra excitement was the incredible chemistry between Reeves and his onscreen love interest, Sandra Bullock. Together, they made a team that stole our hearts — and revved our sex drive — on the way to saving the day.

How to watch: Speed is streaming on HBO Max. We all scream for Brendan Fraser.
Credit: hbo max

Remakes aren’t expected to be good, much less great. Nonetheless, this 1999 resurrection of a 1932 premise had moviegoers freshly exhilarated. A dashing Brendan Fraser stars as an American adventurer who finds relics, romance, and trouble in 1920s Egypt. Joining a beguiling Egyptologist (Rachel Weisz) and her troublemaking brother (John Hannah), he seeks to unearth the long-lost City of the Dead. But this intrepid trio will discover more than they dared dream — or fear — when their excavation awakens an ancient mummy of devastating power. Plagues of flesh-eating scarabs, sentient sand storms, and mystical monsters grant this adventure larger-than-life action sequences. If you want to continue to explore the treasures of this franchise, make a DIY double feature with 2001’s The Mummy Returns.

How to watch: The Mummy is streaming on HBO Max.