LONDON, July 15, 2022 /PRNewswire/ — The agenda of Sustainable Development Goal 16, which talks of resolving the challenge around ‘Conflict, insecurity, weak institutions and limited access to justice,’ seeks to promote a peaceful society and provide equal access to justice to all. 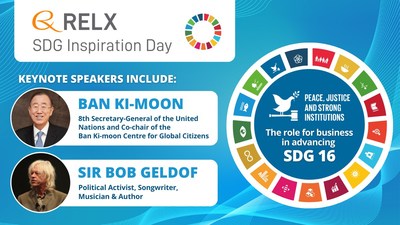 RELX, a global provider of information and analytics for professional and business customers across industries, hosted their ‘Free Virtual SDG Inspiration Day’ on May 9, 2022. The topics discussed during the session was the role of businesses in furthering the agenda of SDG 16.

“All around the world, armed conflicts are causing humanitarian emergencies in countries such as Yemen, Syria, Afghanistan, Ethiopia, and Ukraine. We are at a turning point, and we must choose peace,” encapsulated Secretary Ban Ki-Moon in his keynote address.

Several speakers touched upon the Russia–Ukraine conflict. Dr. Heinz Fischer commented, “The significance and relevance of the SDGs will survive the ongoing war between Russia and Ukraine and will thrive after the war – particularly SDG 16.” Former Director-General of UNESCO Irina Bokova, during her keynote speech, said that the COVID-19 pandemic, the war in Ukraine, and impact of food production due to climate change have impacted the 2030 SDGs, and SDG 16 in particular.

To learn more and watch the entire event, click here.