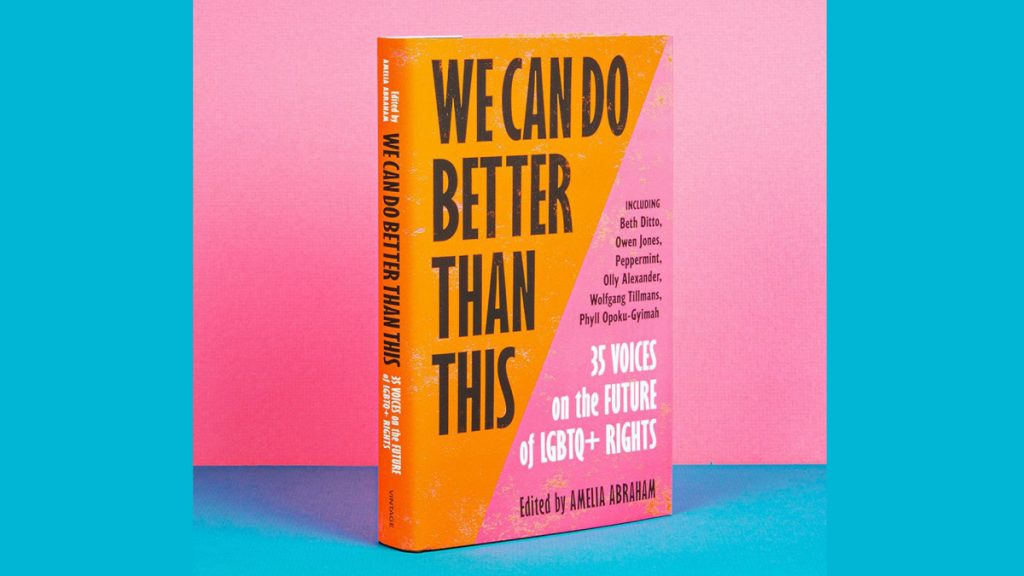 Visibility isn’t the same as acceptance or equality.

That’s what writer Amelia Abraham learned when she went up north to Stockport, UK, to visit some LGBTQ youth groups and talked to young people between 11 and 16 years old about their experiences of being queer.

“A lot of them that experienced quite horrific hate crimes or the type of homophobia that I’ve been lucky enough to not ever had to endure — things like physical violence,” she says. Abraham says many talked of the LGBTQ role models they look up to, including non-binary actor Ruby Rose. “But it didn’t really feel like that top-level visibility had really filtered down to improve their day-to-day experience.”

It was during this visit that she was inspired to edit a book of essays that would show people just what needs to change to tangibly improve the lives of LGBTQ people. We Can Do Better Than This: 35 Voices on the Future of LGBTQ+ Rights is an anthology of pieces by 35 people from the LGBTQ community on how we can start to create a better future. (Disclosure: The author of this story shares the same publisher as Abraham.)

The essays themselves cover a broad spectrum of themes, from reflecting on experiences of dating as a trans person, to building a kinder queer community, learning to love oneself, and embracing the fluidity of one’s own identity. Other essays discuss visibility and public safety, HIV stigma, forced intersex surgeries, and queer influencer culture.

“We talk a lot about how for future generations everything’s so much more accepting and so much better and I think sometimes that can be a bit of a myth,” says Abraham. “That’s what that experience showed me. When we talk about things being so much better now, there’s so much more now, especially for the younger generation, but I think I’ve found out firsthand that that’s not necessarily true. Especially outside of major cities, and especially outside of Western countries.”

Amelia Abraham, editor of We Can Do Better Than This.
Credit: olivia thompson

Abraham points out two of her favourite essays from the book. “One is by Levi Hord, who is a trans academic, and they’re talking about growing up and trying to imagine what their family would look like and creating these queer co-ops with their Barbies,” she says. “Then they talk about how they’ve started to think about pregnancy as a trans person. There’s this amazing argument for how if we took a less gendered approach to pregnancy, it would benefit not just trans people, but basically everyone in society.”

“It’s a guidebook for the next 10 years of activism for LGBTQ+ people themselves and for anyone who wants to be an ally.”

Another essay Abraham loves is “Happily Ever After Isn’t Accessible To Me” by Canadian queer disability activist Andrew Gurza. “He talks about his dating experiences really vividly and with so much humour, and what you end up encountering as a queer disabled person,” she says.

Abraham wanted to explore not just what still needs to change and how far we have to go, but to present ways to make life better for queer people and to ensure their actual safety. When it comes to conversations about LGBTQ rights, Abraham says we are very reactive as a society. “So it takes something to happen — like the Chris and Melania attack on the bus [when two queer women were physically assaulted] — in order for there to be an outcry or horror, or a will to action from people outside of the community, or it takes Black Lives Matter protesters to draw attention to the number of Black trans people being killed in America for people outside of the community to realise that that’s a problem,” says Abraham.

How Black Lives Matter could change Pride for the better

For Abraham, the book was meant to be active rather than reactive. “You don’t need to just respond when something bad happens, we can constantly be trying to push things forward in all these ways,” she says. “It’s a guidebook for the next 10 years of activism for LGBTQ people themselves and for anyone who wants to be an ally or cares about LGBTQ rights.”

By understanding what the next frontiers are, we can begin to know what we’re fighting for, says Abraham. “I hope that by spotlighting stories of what different queer people all around the world are experiencing we can start to get a picture of what needs to change, whether it be HIV stigma, bullying in schools, the criminalisation of homosexuality, lack of care for LGBTQ elderly, or long waiting times for trans people,” she says.

If the book encourages people to change their minds about the LGBTQ community, that will be really useful, says Abraham. “And if it encourages material action, then even better.”

We Can Do Better Than This: 35 Voices on the Future of LGBTQ+ Rights is out now through Vintage Books.