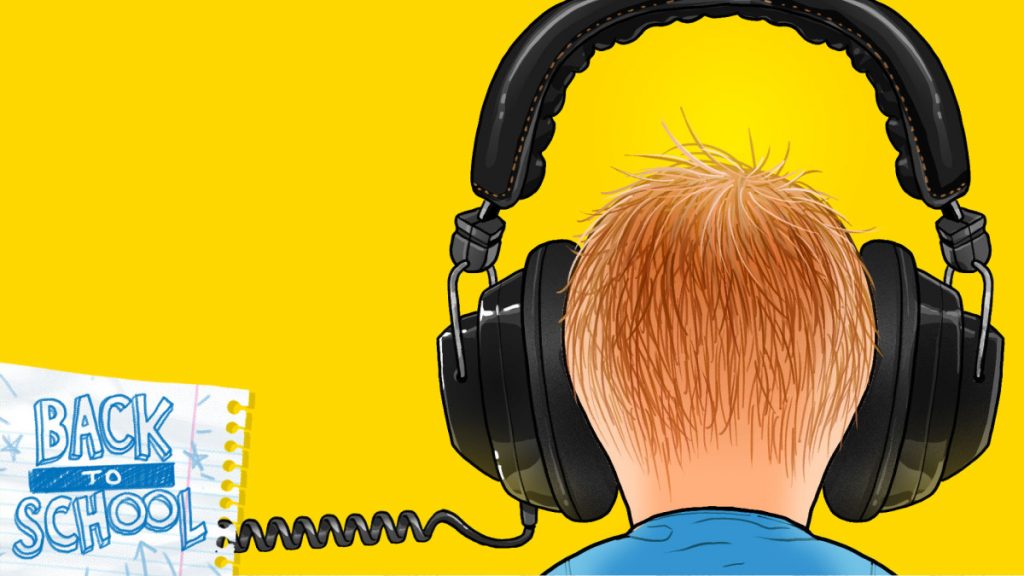 4 podcasts to teach kids about history, identity, and current events

In our Back to School series, Mashable tackles the big issues students face, from mental health to representation to respectful communication. Because returning to the classroom is about more than buying school supplies.

As your child heads back to school, you may be looking for appropriate ways to bolster the education they’re getting in the classroom. But how do you determine what’s suitable for their grade level but also inclusive and entertaining enough that they won’t be bored to tears? Try podcasts.

There are many child-friendly podcasts out there that explore topics that aren’t often included in traditional curriculums. You can listen to them in the car on the way to school or sports practices, and they can spark questions around difficult topics like racism or identity — in an age-appropriate way.

Christine Elgersma, senior editor of parent education at Common Sense, which provides media resources for families and schools, can attest to this personally. She and her 9-year-old daughter often listen to podcasts together and discuss the issues they bring up. “The nice thing about podcasts is it’s often a joint activity, so often parents and kids are listening together,” Elgersma said.

Mashable spoke with Elgersma to get her top recommendations for child-friendly and thought-provoking podcasts that cover a range of topics from history to politics to identity.

This modern take on fables is structured as an interconnected fiction anthology. It explores a variety of characters, identities, and experiences, including that of a young boy who is being bullied and a homeless military vet. Each episode sounds like a bedtime story, with colorful descriptions and a multitude of characters (all voiced by the host, Morgan Givens, who in addition to being a writer and audio producer is also a voice actor). He approaches each episode in a sensitive, age-appropriate way, without downplaying serious topics.

Givens describes his podcast as “hopepunk,” a term coined in 2017 by fantasy author Alexandra Rowland. Characters who embody hopepunk stand up for their convictions, support others, and work toward a kinder and more equitable world. Givens drops a big dose of hopepunk into each of his protagonists’ hearts and minds.

Givens, who is Black, has previously said he intended “Flyest Fables” for young Black kids. But, as Elgersma said, it includes characters from all walks of life. Someone recently recommended the podcast to her, and she plans to listen to it with her daughter, though neither belong to the target audience.

The episodes range from about 10 to 25 minutes, perfect for your child to listen to before they fall asleep.

“So Get Me” explores a variety of identities and stories from real people, from 11-year-old Mikaela, who is transgender, to Innosanto Nagara, who is a children’s author and activist. Each episode is empowering, encouraging listeners to embrace different identities without any apologies. Like the podcast’s title states, each person featured on the episodes tells the world to accept them for who they are.

The podcast is brought to you by the music group the Alphabet Rockers, a duo who attempts to create a just world through empowering hip-hop. Their Grammy-nominated album Rise Shine #Woke was “created to interrupt racial bias” and includes song titles like “Stand Up For You” and “I’m Proud.”

One of the hosts, Kaitlin McGaw, has a graduate degree in African-American studies from Harvard. Her musical partner, Tommy Shepherd, Jr., is an actor, composer, rapper, music producer, and more. The host, hip-hop dance teacher Samara Atkins, takes the listener on an engrossing and entertaining ride with McGaw, Shepherd, and the episodes’ guests.

This podcast is for everyone who has ever felt excluded because of their differences, and for those who are looking to learn about different identities. If you want to add social justice elements into you and your children’s lives, look no further than “So Get Me.”

Adults aren’t the only ones who feel overwhelmed by the hectic and sobering news cycle. Kids feel it too. This podcast breaks down the news in a kid-appropriate way through episodes that are about five minutes long. Past episodes have explored topics from climate change to sports to the presidential debates. Though it focuses heavily on American news, it sometimes covers global news.

Each episode also ends with a quiz designed to test children’s retention of the information provided.

“It’s a nice entry point if you’re trying to discuss what’s happening in the world, without exposing your kids to some of the tougher topics in a way that might be traumatizing or not kid-appropriate,” Elgersma said.

If you want your child to be informed about the news but not overwhelmed, try this podcast.

This podcast is a quirky and fun take on often-concealed pieces of history, Past episodes have delved into the story of the little-known prairie dog that accompanied Lewis and Clark; Emily Roebling, who unexpectedly became the Brooklyn Bridge’s chief engineer; and the history of the hot dog.

Some episodes also tell the stories of women who have taken a backseat in history books, such as 17-year-old Jackie Mitchell, one of the first female pitchers in professional baseball history, who struck out both Babe Ruth and Lou Gehrig. (Some people believe it was a publicity stunt, which the episode acknowledges.)

To bring the story alive, historical figures are sometimes voiced by guests, who really take their voice acting seriously.

As with “KidNuz,” the podcast’s host, professional museum educator Mick Sullivan, intersperses quizzes throughout some episodes to ensure kids are paying attention.

Along with Elgersma’s suggestions, we’re offering a few more. The podcasts below have all received Common Sense recommendations. The shows dive into a wide array of stories and topics for kids of all ages.

“But Why?” is a podcast designed to answer kids’ most pressing questions, asked directly by kids themselves. During the pandemic, it launched live (over the phone) discussions with kids and experts to address some of life’s biggest questions of diversity, the environment, and the world at large.

The show, hosted by Vermont Public Radio, tackles just about everything a curious kid could ask their caregivers. Questions like: Where does money come from? How does soap work? Why do we have to go to school? And even bigger topics that, OK, maybe not every kid is asking, but are still important: Why is there a big patch of garbage in the Pacific Ocean? Who makes the laws? Why can’t kids vote? With the help of expert voices, the show answers the simple and the complex in kid-friendly terms.

Common Sense listed “But Why?” in its 25 Best Podcasts for Kids, and recommended the show’s quick bi-weekly episodes for all ages, parents included.

Similar to “But Why?”, this podcast by American Public Media answers kid-submitted science questions in an engaging, hands-on way. The show is co-hosted by a new kid each week, and comes with online activities to supplement the lessons in each episode. “Brains On!” even has subject-specific episode playlists covering big, complicated topics, like public health and the coronavirus, and the environment and water. There’s an “Exploration and Adventure” playlist featuring the stories of Australia’s youngest female pilot, an investigation into underground cities, and interviews with kids who are exploring science in unique ways.

Common Sense included “Brains On!” in its best podcasts for tackling the “summer slide” (a decline in academic proficiency during the school break). The organization described the show as a successfully silly and entertaining science education for slightly older kids and tweens.

The stories cover complex and relevant science facts, like how smallpox was eradicated, and shares histories lost or manipulated over time, including the tale of Mildred Fish Harnack, a Nazi resistance fighter from Wisconsin, and the story of the Kerner Commission Report, presented to President Lyndon Johnson outlining reforms to achieve racial justice (he refused to accept it). Featured names span politics, science, and art.

Hosts Tracy V. Wilson and Holly Frey pay special attention to the histories of underrepresented groups, like the lives of woman artists Jo Nivison — an established artist whose story was second to her famous husband, Edward Hopper — and Berthe Morisot, a talented impressionist painter and close friend of famous artist Edouard Manet.

The show, which Common Sense says is best for “tweens and teens,” dives into just about everything. During last year’s racial justice movement, “Stuff You Missed in History Class” created a Twitter thread of every episode featuring important Black history.

NPR’s Codeswitch is an award-winning podcast that discusses race and racism through the voices of journalists of color — it’s an honest, open look at how race affects every part of American life. Last year, amid national conversations about racial justice and the struggle of pandemic at-home education, Codeswitch created a playlist of kid-appropriate episodes to help parents start (and expand) the conversation. The list includes history lessons, current events, and even personal stories.

The episode On the Shoulders of Giants outlines a history of activism among Black athletes, from Olympic champion sprinter Wilma Rudolph to football player Colin Kaepernick’s recent protests. In Word Up, Codeswitch explores a 1992 University of Kansas study that concluded children who grow up in poverty hear 30 million fewer words than children living in more affluent homes. The study is still cited in education years later, but it’s misleading, maybe even just wrong. It was based on only 42 families, the numbers are approximations, and some researchers say it has inherent racial biases.

Important for kids transitioning out of elementary school, Dispatches From the School Yard shares stories from real middle and high schoolers about the struggles and triumphs of everyday life, including “periods, Deaf culture, juvenile detention, and being transgender.”

The list was highlighted in Common Sense’s Wide Open School curriculum, a program designed to help connect families, kids, and educators with additional education resources. Codeswitch says every episode is “free of profanity, graphic references, and other adult content” and hopes the playlist encourages “bright young minds… Just waiting to learn how to fight the power and advance racial justice.”

Original story published in Aug. 2019 and updated with additional reporting by Chase DiBenedetto in Sept. 2021.