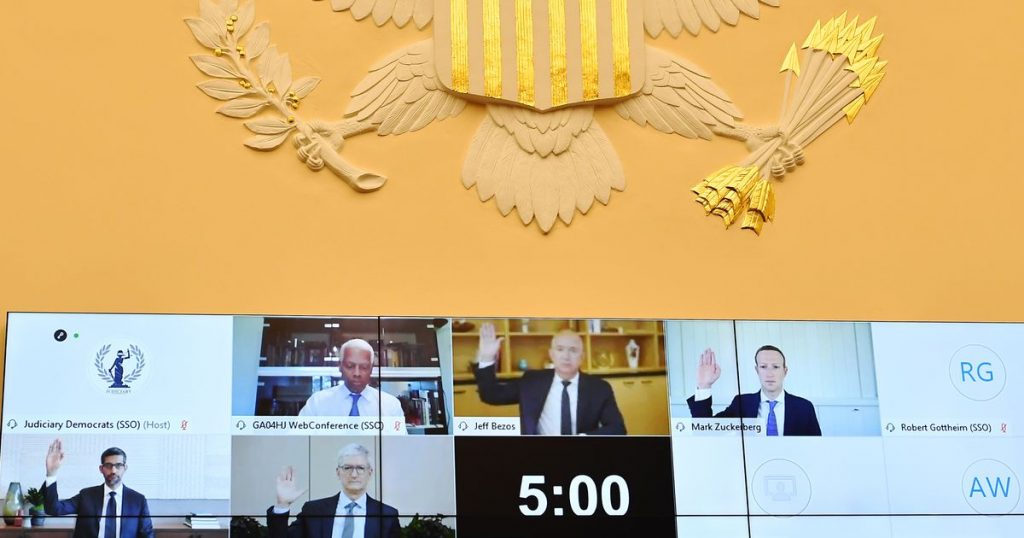 Lawmakers have introduced five meant to limit the power of, and possibly even break up, large tech firms such as Facebook and Amazon.

This comes after a into the monopoly power of some Silicon Valley giants.

Led by the ranking members of the antitrust subcommittee, Democrat David Cicilline and Republican Ken Buck, a bipartisan coalition in the House introduced the legislation on Friday. If passed, the bills would give the government more power to regulate Big Tech.

The bills need to pass in the House and Senate before President Joe Biden could sign them into law. And even with bipartisan support, getting all five of these bills passed will be an uphill battle.

But considering Big Tech now spends more on lobbying in the U.S. than any other industry, the fact this legislation made it out of committee is huge.

Here are five takeaways from the five bills.

1. The official definition of a Big Tech company

To establish who these new rules would actually apply to, the American Choice and Innovation Online Act defines “covered platforms” as those with 50 million monthly active users. They also include firms with a market capitalization — the total value of a company’s shares of stock — of more than $600 billion.

Microsoft, Alphabet (the parent company of Google), and Amazon all have market caps of more than $1 trillion. Apple is worth more than $2.25 trillion.

2. The bills are specific enough to stop Big Tech companies from doing things that give them an unfair advantage

There are provisions in the bills that seem written with the actual practices of Big Tech companies in mind. For example, Amazon of using data from sellers to gain a competitive advantage over them, as in the case of PopSockets.

Some have criticized Google for placing search results for its own platforms, like Google Shopping, above those from other companies. Provisions in the American Innovation and Choice Online Act specifically prohibit practices like these, and more.

The Ending Platform Monopolies Act, sponsored by Rep. Pramila Jayapal, explicitly says that “covered entities” have to stay in their lanes.

In particular, they can’t own businesses that give rise to “conflicts of interest.” Amazon sells an Amazon Basics line of products. The existence of this line — which Amazon sells on its own platform along with competing products — could constitute a conflict of interest.

As Alex Kantrowitz points out in his Big Technology newsletter, the wording is “vague enough to cover everything,” giving regulators a powerful tool for breaking up Big Tech companies.

4. They would limit acquisitions

Beating a company with a head start and massive war chest isn’t always an option for startups. So sometimes they form with the goal of being acquired, which can be lucrative for founders and employees ().

And Big Tech is happy to buy a company rather than compete with it. That’s how Facebook neutralized the threat of WhatsApp and Instagram. That, unfortunately, leaves consumers with fewer options.

The Platform Competition and Opportunity Act prohibits certain types of acquisitions that would “entrench market power” or seek to neutralize “competitive threats.”

5. The FTC and DOJ will finally get what they need to fight Big Tech

The Merger Filing Fee Modernization Act will give more money to agencies responsible for regulating Big Tech, including the Federal Trade Commission and Department of Justice.

Underfunding at the DOJ and FTC have limited how hard they can go after tech companies with bursting legal coffers. Emails obtained by Politico showed that while the FTC was suing Facebook, its leaders were telling employees to gear up for “belt tightening.”

With more money, these agencies will be better prepared to take on Google, Facebook, Amazon, and Apple’s lawyers.