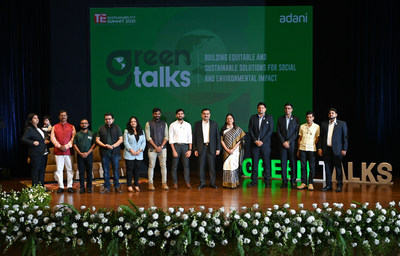 The Adani Group, India’s fastest-growing portfolio of companies, will institute the Adani Prize for Social Enterprise – India’s biggest annual prize in the social sphere. This was announced by Mr Gautam Adani, Chairman of the Adani Group, at the first-ever Green Talks, an Adani talk-series initiative to provide social entrepreneurs a platform to present their ideas and secure support for their work.

Beginning in 2022, the Adani Prize for Social Enterprise will be awarded to five outstanding social entrepreneurs for their impact in India and other parts of the developing world. The Adani Prize will provide a total of Rs 5 Crores in funding for the five chosen social enterprises. The winners will be chosen by an international panel of eminent personalities drawn from different fields of expertise, including science, business and governance.

“I am humbled by how social entrepreneurs devote themselves to the difficult, often underappreciated but essential work of helping those who are less privileged,” said Mr Gautam Adani, Chairman of the Adani Group. “While we must invest heavily in enabling the transition to a greener, low carbon world, that transition must also include plans to enable the social upliftment of people. The green shoots of recovery for the planet can be truly green only if we create a climate of faith and optimism for even the world’s most socially deprived people. I am optimistic that the Adani Prize and the Green Talks series will lay the foundation for this process of discovering social entrepreneurs who are making major impacts and help to fund their best ideas.”

The Adani Group will invite other partners, including corporates, to join an initiative to create a collaborative fund for social enterprises that will help to expand the number of social upliftment projects that could be funded. As the first step, the Group will drive an open-source innovation platform as a unifying force for the best of ideas from social enterprises across the developing world.

About the Adani Group

The Adani Group is a diversified organization in India with a combined market cap of $123 Bn comprising six publicly traded companies. It has created world class transport and utility infrastructure portfolios with a pan-India presence. Adani Group is headquartered in Ahmedabad, in the state of Gujarat, India. Over the years, Adani Group has positioned itself to be the market leader in its transport logistics and energy utility portfolio businesses focusing on large scale infrastructure development in India with O & M practices benchmarked to global standards. With four IG rated businesses, it is the only Infrastructure Investment Grade issuer in India.
Adani owes its success and leadership position to its core philosophy of ‘Nation Building’ driven by ‘Growth with Goodness’ – a guiding principle for sustainable growth. Adani is committed to increase its ESG footprint by realigning its businesses with emphasis on climate protection and increasing community outreach through its CSR program based on the principles of sustainability, diversity and shared values. For more information, visit: www.adani.com.