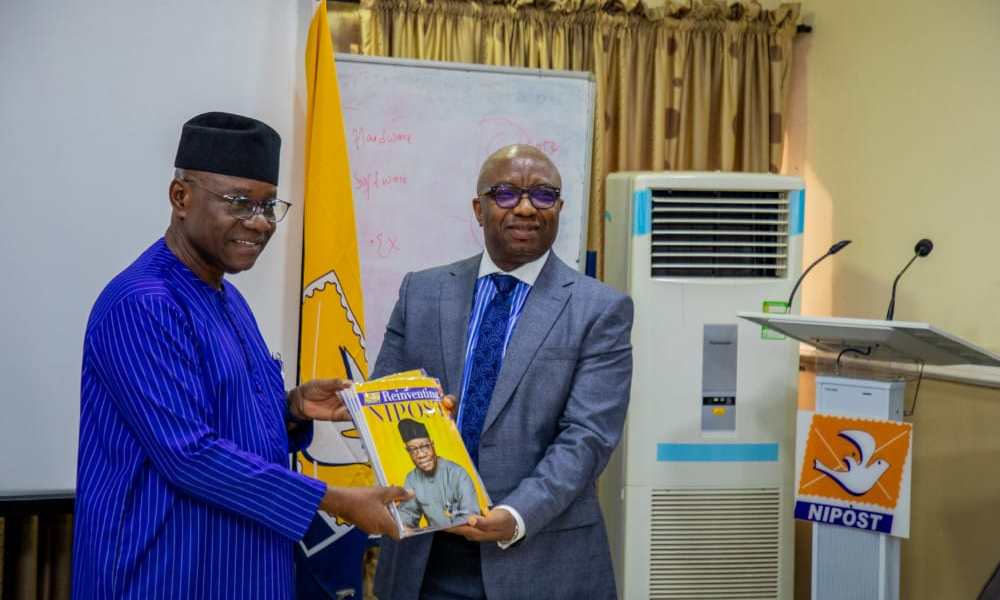 With data privacy and protection gaining prominence and recognition across the globe through its impact on digital economy, wealth creation and employability, it has become imperative for all Federal Government Ministries, Departments and Agencies in the country to ensure the full protection, privacy and confidentiality of all citizenry data under their purview.

Dr Vincent Olatunji, the National Commissioner (NC) of the Nigeria Data Protection Bureau (NDPB), made this known during a courtesy visit to the Nigerian Postal Service (NIPOST) office in Abuja.

Speaking on the importance of data privacy and protection in a digital economy, Olatunji stated that the digitization of existing traditional processes which also affects individuals from birth to their deaths should be given utmost attention and priority considering its value.

“Now we are talking about digitizing all processes right from birth of individuals to their death which has laid credence to the fact that we have to adequately protect the kind of information and data we upload on the internet”, he noted.

According to the Bureau’s CEO, data subjects need to know how their data is been handled, processed and protected by data processors in a global digital economy worth over $11.5trillion.

The Data Security Officer of the country expressed the importance of data privacy and protection as a necessary element in the drive for a digital economy while emphatically stating that countries will not do businesses with other countries who don’t have privacy laws.

He then urged NIPOST which is a major data processor and controller considering the volume of data they process daily to develop robust privacy policy, organizational measures, technological measures and staff capacity building in line with the provisions of the Nigerian Data Protection Regulations (NDPR).

“On your website, you need to emphasize more on your privacy policy which must be simple, effective and clearly displayed. We will also be building the capacities of your regional officers on data protection procedures since they are the frontliners who have direct interaction with people and their data”, he added.

While highlighting the need for NIPOST to engage a Data Protection Compliance Organization (DPCO) to put them through NDPR compliance measures, Olatunji averred that DPCOs have been instrumental in the traction gained in the implementation of the NDPR which has also helped in the growth of the Nation’s economy.

“We have licensed 103 DPCOs and an average DPCO employs nothing less than 10 people depending on their capacity and the number of clients they are dealing with. This has helped in job creation in the country with a total of over 8000 jobs created in the ecosystem”, he disclosed

Emphasizing further, the NC mentioned that DPCOs will take NIPOST through the compliance process on an annual basis and file their audit report with the Bureau which will be published subsequently on the Bureau’s website.

The published report according to Olatunji will lay credence to the fact that NIPOST has complied fully, taken the issue of data privacy seriously and demonstrate synergy amongst the agencies under the Ministry of Communications and Digital Economy.

He then advised the management of NIPOST to ensure that all courier and logistics companies under them comply with data privacy in order to earn the trust of Nigerians.

“We are developing tool kits for different sectors in the country based on their peculiarities and will work with you to ensure that the provisions of the NDPR are not only complied with but seen as a culture”, Dr Olatunji concluded.

Reacting to the National Commissioner’s address, the NIPOST Postmaster General, Dr. Ismail Adebayo Adewusi commended the Honorable Minister of Communications and Digital Economy,  Prof. Isa Ali Ibrahim (Pantami) for recommending the appointment of Dr. Olatunji as the pioneer National Commissioner of the Bureau.

“Truth be told, Dr. Olatunji is a highly professional and cerebral technocrat who has adequately discharged all the assignments he has been entrusted to handle over the years and is a perfection description of a round peg in a round hole”, he asserted.

The PMG then applauded the Bureau for their unflinching and consistent efforts thus far in ensuring the protection of data in the country.

He disclosed that the corporation has been educating and sensitizing people on the role of posts in a digital economy considering the critical role they play in the movement of people’s goods, parcels, mails and financial services across the globe.

Stating that NIPOST is at the center of dealing with people’s information, Adewusi said they have a serious responsibility to protect people’s data within their domain and promised to work closely with the Bureau in achieving this.