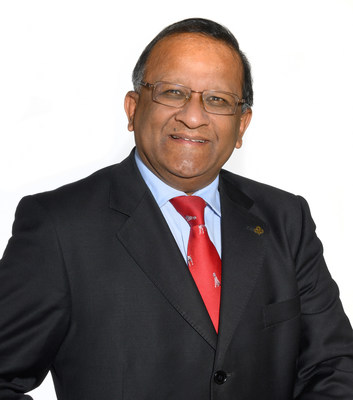 SAINT-LAURENT, QC, May 5, 2022 /CNW Telbec/ – Alan DeSousa, Mayor of Saint-Laurent, has been appointed Council Chair of the Green Municipal Fund (GMF) of the Federation of Canadian Municipalities and will serve in this capacity until March 31, 2024. This $1.65-billion fund financed by the federal government supports municipalities of all sizes throughout Canada in carrying out their sustainable development projects.

“It is a great honour for me to chair the Federation of Canadian Municipalities’ Green Municipal Fund Council. I am proud and pleased to be able to share my many years of experience and expertise in sustainable development and municipal leadership with other communities in the country. Under my leadership, Saint-Laurent has become a sustainable municipal territory recognized for being innovative and at the forefront of the green transition. I would like to help spread these same values across Canada because the climate emergency can’t wait any longer!”

“We are delighted that Mayor DeSousa has agreed to chair the Green Municipal Fund Council. In this key role, Alan DeSousa will help Canadian municipalities of all sizes move towards carbon neutrality, so that their actions drive transformational change in the areas of energy, affordable housing, transportation, water, land use planning and waste.”

Joanne Vanderheyden, President of the Federation of Canadian Municipalities

Alan DeSousa succeeds Ben Henderson, who has served as GMF Council Chair since 2015. Since its creation 20 years ago, the GMF has invested in 1738 projects, contributed toward avoiding 2.75-million metric tons of CO2 and helped create 12,908 person-years of employment.

Mr. DeSousa has served on the GMF Council as a municipal elected official since June 2018, where he was the Vice-Chair and Chair of the Audit Committee. In 2014, he received the FCM Green Champion Award and the Canada Green Building Council Government Leadership Award in the public sector.

He brings more than 30 years of public administration experience and activism for sustainable development and environmental preservation to the role of Council Chairman. He has a thorough understanding of municipal government decision-making.

Mr. DeSousa is serving his sixth term as Mayor of Saint-Laurent and has been a member of Ville de Montréal’s Executive Committee for over 11 years. He also sat on the Council of the Communauté métropolitaine de Montréal (CMM) from 2002 to 2017 and was a member of its Executive Committee for eight years. Mayor DeSousa has contributed to Montréal’s sustainable development and environmental policies, moving them from the planning stages to implementation.

Through his commitment and determination, Saint-Laurent became the first municipal entity in Québec with a population of over 100,000 to complete the final phase of the FCM’s Partners for Climate Protection program in 2019. The Saint-Laurent Biodiversity Corridor has received two national awards since 2020 from the Royal Architectural Institute of Canada (RAIC), the Canadian Institute of Planners and the Canadian Society of Landscape Architects. As for the Bibliothèque du Boisé, this library in Saint-Laurent received the 2017 Green Building Award from RAIC and the Canada Green Building Council.

Chairing the GMF Council contributes toward reinforcing the borough’s commitment to environmental protection. This appointment notably echoes the 2021-2030 Climate Emergency Plan adopted by Saint-Laurent last fall to reduce greenhouse gas emissions, both those of Saint-Laurent’s Administration and those of its residents, institutions, businesses and industrial firms.

Saint-Laurent already has a long history of successful collaboration with the GMF. For instance, it obtained financing from the Fund for the Éco-campus Hubert-Reeves project at Technoparc Montréal, for the Complexe sportif and for the Bibliothèque du Boisé.

About the borough of Saint-Laurent

A city established in 1893, Saint-Laurent became one of Montréal’s 19 boroughs in 2002. Located north of the island of Montréal, Saint-Laurent is the largest borough of all, with its 42.8 square kilometres. Its population of over 100,000 is one of the most multicultural. With the borough having become a “sustainable municipal territory” in 2019, its Administration places sustainable development—and environment protection, in particular—at the heart of all its decisions: a challenge that is all the greater since more than 70% of its territory is devoted to industrial and commercial activities, with over 4500 companies and 110,000 jobs. In fact, it is home to one of Québec’s main industrial and technological hubs. Already boasting great accessibility to the main highways and public transit, Saint-Laurent is getting ready to welcome 5 train stations within the new Réseau express métropolitain (REM) light rail network. And last but not least, with Saint-Laurent’s two libraries, its Centre des loisirs (recreation centre), its modern Complexe sportif, its arena and some 50 parks, a wide range of services are offered in many areas of activity, such as culture, sports and recreation. In this way, Saint-Laurent’s Administration ensures a high quality of life for families living in the borough as well as a stimulating environment for businesses.