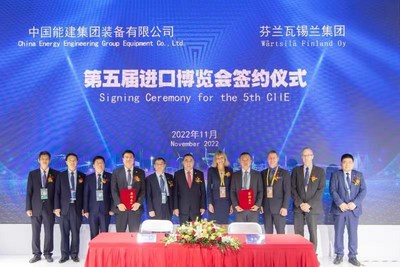 Initiated by China Energy Engineering Group Co Ltd, the New Energy, New Infrastructure, New Industry Alliance and Shanghai Green Low Carbon City Industry Alliance were set up in the city on Monday to further step up the green and low carbon transition in the country, the company said on Tuesday.

The alliance, consisting of 242 new energy related companies, social organizations and research institutes, will come up with an innovation and cooperation platform to better seize new opportunities for the development of green and low-carbon industries, said the company, one of the world’s largest advanced energy engineering conglomerates.

Song Hailiang, chairman of the company, also known as Energy China, said the platform will further facilitate the company in the development of green and low-carbon economy, digital economy and sharing economy.

In addition to domestic cooperation, the company has also been strengthening its technical cooperation with partners worldwide while actively exploring diversified cooperation methods.

Song said the company will accelerate its investment in solar, wind and hydropower in economies participating in the Belt and Road Initiative, considering the tremendous potential the clean energy market has for years to come.

The company currently sees its business spread across more than 140 countries and regions, with a contract value signed with economies participating in the BRI exceeding 500 billion yuan ($71.8 billion) in the past five years.

Energy China has seen its presence expanding on the global stage in the past few years with its high-quality projects, including the Nestor Kirchner-Jorge Cepernic hydropower plant in Argentina, the Tengger Reservoir 60-megawatt floating solar project in Singapore, the Sao Lourenco water supply project in Brazil and the Umm Al Quwain independent water project in the United Arab Emirates.

During the fifth China International Import Expo (CIIE), the company had also signed purchase agreements with a record total contract worth $1.34 billion, up 43.6 percent compared with the previous expo, it said.

This is the fifth year the company has participated in the CIIE, with an accumulated purchase amount reaching up to $3 billion, it said.