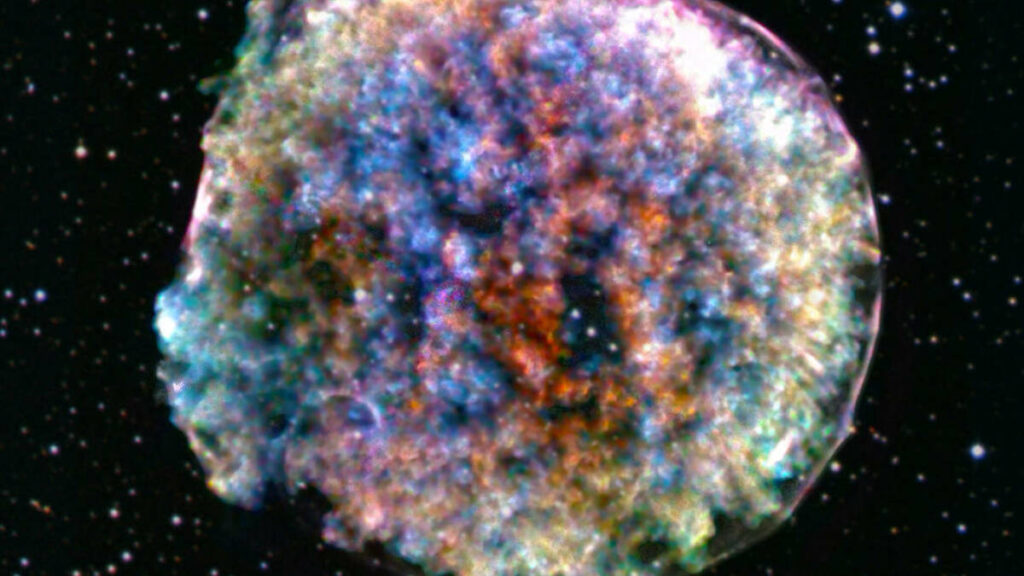 There’s a vivid, reddish star in the night sky. Called Betelgeuse, it’s found in the famous constellation Orion and over millions of years has swelled in size, earning it the title of a “red supergiant.” Betelgeuse, over 500 light-years from Earth, will eventually collapse on itself — or perhaps the distant star already has — resulting in a dramatic explosion called a supernova.

Until recently, astronomers had never directly witnessed a massive, aging star explode. But in 2020, astronomers atop Maui used a powerful telescope to detect an unusually active red supergiant, much more distant than Betelgeuse (at some 120 million light-years away). They watched it closely for 130 days, giving themselves an invaluable view of the grand finale. The resulting stellar explosion is called “supernova 2020tlf.”

“We actually saw the star violently erupt,” Wynn Jacobson-Galán, an astronomer at the University of California, Berkeley who led the research, told Mashable. “It’s been something we wanted to find.”

The research was published Jan. 6 in The Astrophysical Journal.

The explosion of this star happened well beyond our Milky Way in the galaxy NGC 5731, so there’s no “close-up” footage. (Any stars well beyond our galaxy usually appear as a dot through our telescopes.) But the astronomers, sensing the explosion was imminent, employed specialized imaging equipment at the W.M. Keck Observatory, atop the lofty Mauna Kea in Hawai’i, to observe the climatic “powerful flash” and intense release of energy.

The blast was conspicuous, even in a distant galaxy filled with luminous stars. “It takes just one supernova to outshine all the other stars in the galaxy,” explained Jacobson-Galán.

To better visualize the dramatic cosmic event, astronomers made the animation below. Here’s what you’re seeing:

Supernovas, caused by the collapse of massive and expanding stars, are violent ends to these great gaseous orbs, but they’re also invaluable cosmic creators. Crucial elements, like iron, are manufactured inside the most massive stars, and the ensuing supernova eruptions scatter the critical elements throughout space. Some elements are only created in extreme conditions during the blast itself, like silver, gold, uranium, and lead.

“Without supernovae, life would not be possible,” explains NASA. “Our blood has iron in the hemoglobin which is vital to our ability to breath. We need oxygen in our atmosphere to breathe. Nitrogen enriches our planet’s soil. Earth itself would be a very different place without the elements created in stars and supernova explosions.”

If a scary asteroid will actually strike Earth, here’s how you’ll know

Before this unprecedented supernova observation, astronomers mused that perhaps red supergiant stars were quiet before they collapsed in dramatic fashion. But this star (and perhaps others too) emitted vibrant heat and energy before the blast.

Jacobson-Galán and other astronomers will continue to sleuth out opportunities to view how stars behave before they go supernova and scatter essential elements into the universe. It’s certainly a thrilling scientific endeavor.

“It’s like watching a ticking time bomb,” Raffaella Margutti, an astrophysicist at Northwestern University, said in a statement.