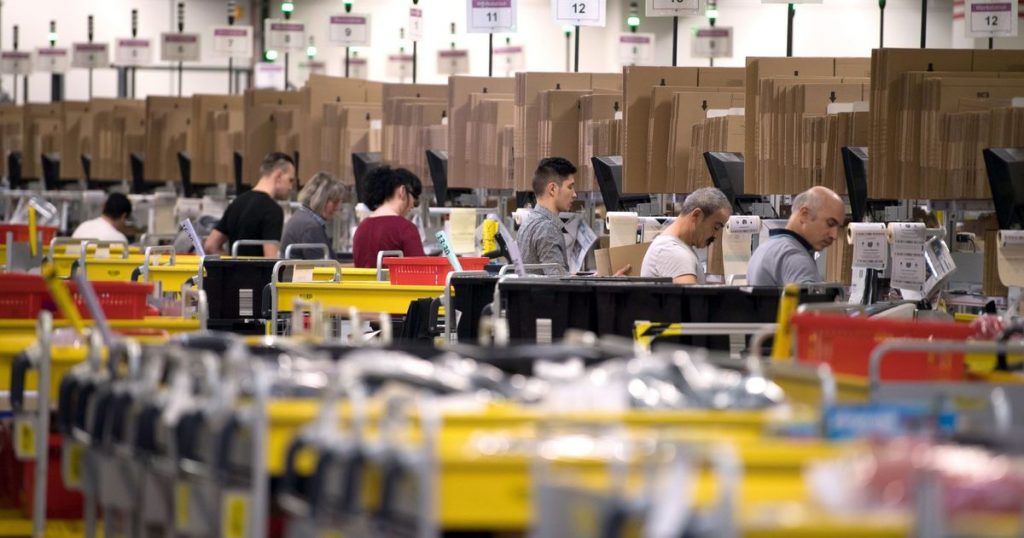 If the punishing pace of thankless work in an Amazon warehouse is getting you down, why not eat some lettuce?

has revealed a pamphlet produced by Amazon as part of its WorkingWell program, and it looks like something out of an optimistically oblivious high school health class. Characterising warehouse workers as “industrial athletes,” the irrationally sunny, vaguely condescending missive attempts to reframe Amazon workers’ grueling shifts as an invigorating challenge rather than spirit breaking grunt work.

“Here at Amazon, you will become an ,” reads the pamphlet, with original emphasis. “Just like an athlete who trains for an event, industrial athletes need to prepare their bodies to be able [to] perform their best at work. We want to make sure you feel your best while doing your best!”

Entitled “Amazonians Guide to Health and Wellness,” the pamphlet was circulated at an Amazon warehouse in Tulsa, Oklahoma, and offered workers tips for preparing for their shift such as “Enjoy more fish and nuts” and “Buy shoes at the end of the day when your feet are swollen to allow for plenty of room when they swell during work.” It also includes a segment on what workers can do to “feel better,” suggesting workers stretch, get massages, compress and elevate injured areas, and “[take] care of YOU on your days off.”

According to Amazon, its WorkingWell program is focused on reducing workers’ risk of injury by providing them with “physical and mental activities, wellness exercises, and healthy eating support.” Though , the company states that aspects of it have been piloted in the U.S. since 2019.

Amazon told Motherboard the “Amazonians Guide to Health and Wellness” pamphlet was mistakenly created and immediately removed. However, Motherboard reports that it was apparently in circulation since at least November 2020, and still obtainable a few weeks ago.

This isn’t the only time Amazon has attempted to rebrand one of its less savoury aspects. The company also recently stopped referring to its 10-and-a-half hour overnight warehouse shifts as the “Megacycle,” switching to the arguably more PR-friendly “Single Cycle.”

Amazon’s warehouses are notorious for the high occurrence of injuries in the workplace. A new report from the Strategic Organizing Center found there were — a rate almost 80 percent higher than that at non-Amazon warehouses.

Rather than paternalistic pamphlets, these concerning statistics could be more effectively reduced by lowering Amazon’s onerous productivity expectations, and thus the breakneck speed at which employees are required to work. Of course, if all you care about is the bottom line, it’s much easier to shove responsibility for workers’ well-being back onto them by simply saying they should “go to bed at the same time each night.”

The rather tone-deaf pamphlet also raises questions about how feasible Amazon’s suggestions actually are. Eating whole grains, fruits and vegetables sounds all well and good, but for many Americans it’s difficult to achieve due to issues such as , , and lack of time for food prep. In fact, thousands of Amazon’s warehouse workers are , and with , it leaves little time or energy for healthy meal planning.

Further, while Amazon’s current is significantly better than the , it still isn’t exactly comfortable — especially if you were hoping to buy enough fresh food to feed a family. According to the Massachusetts Institute of Technology’s Living Wage Calculator, the current living wage for a single adult with no children in Tulsa is , budgeting only $8.70 per day for food. Amazon’s pay rate becomes even less appealing when you consider the significant likelihood that you’ll have to spend part of your salary on medical bills.

Between the crushing conditions, , and high risk of injury, eating more greens seems like the least of Amazon warehouse workers’ problems.