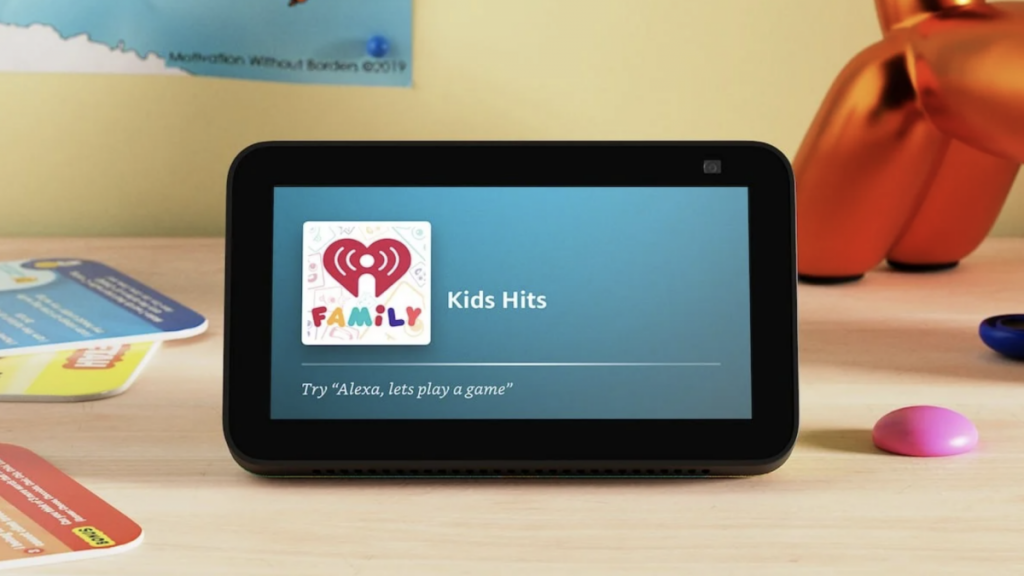 The Echo Show has been around for a while, along with Amazon products made specifically for kids, but the Echo Show 5 Kids is a newbie on the scene that made its debut with the revamped 2nd gen Echo Show 5 and Echo Show 8. It has the same features as the new Echo Show 5, but with a cool chameleon look, a free year of Amazon Kids, and some beefy parental controls.

And since I’m just a boring 30-year-old who spends her days hunched over a desk, I decided to enlist the help of a true expert for the purposes of this review: My 5-year-old son, a Fire tablet devotee and Sonic the Hedgehog superfan.

I knew he’d be all about figuring out the Echo Show 5 Kids for me, so I let him take the lead. His verdict?: “I really like it!”

What parents will like about the Echo Show 5 Kids

With Amazon Kids installed, this device is made for learning and fun. After just a few minutes of tinkering, my son settled on a Skill (the Echo Show’s version of apps) all about learning the periodic table. Can’t complain there.

As far as safety and security go, there’s a physical camera shutter right on top (just like the standard 2nd gen Echo Show 5) that you can toggle on and off. You can also use the device as a security camera to check in on things from the Alexa app as long as you’ve got a WiFi connection — perfect for checking in at night without subjecting your big kid to a baby monitor.

Video calls and drop-ins are available and really easy for kids to do themselves, but only to approved contacts and other devices in your home. Doting grandparents everywhere will love it. All you have to do is add contact phone numbers through the Alexa app (available for iPhone or Android) on your phone.

The parental controls are super intuitive and thorough, and your purchase comes with a free year of Amazon kids and a 2-year worry-free guarantee.

Finally, Alexa can answer those endless questions your kids have, which is arguably the very best thing about the Echo Show 5 Kids (especially if your kid, like mine, is both chatty and curious). Share that burden, parents!

When I asked Alexa to name the planets, she rattled them off and even gave a brief, kid-friendly explainer on why Pluto is no longer considered one.

The stuff kids will go crazy for

The chameleon look is adorable and according to my son, it’s “dinosaur scales” — which boosts the cool factor in his eyes to approximately infinity. And the Echo Show 5 is the perfect size for tiny hands — the larger Echo Show 8 would be a little too cumbersome for younger children.

Alexa is a great listener, too, so the Show 5 is really easy for kids to use. My son got a kick out of talking to Alexa and happily listened to books and played on his own thanks to her helpful prompts. We love impromptu dance parties at my house, and it was nice to know that my son could DJ for us all by himself using his Echo Show 5 Kids without accidentally stumbling across explicit music. (BTW, our latest jam has been the Sonic X theme song on repeat — “Alexa, play the Sonic X song” every five minutes.)

One of the best features of the Echo Show 5 Kids is that Alexa can read your kid a book. All they have to do is say, “Alexa, read me a story” to have a Disney story read to them. And if you have an Audible membership, Alexa can also play Audible audiobooks that you’ve shared with your child’s profile. For youngsters whose reading skills haven’t yet caught up to their big imaginations, this is a great way to get more reading time in.

It can stream video from all the major streaming services, too so it’s great for entertaining the kids while freeing up the TV so you can watch something.

The few games available on the device are super interactive and seem to be mostly learning-based. They kept my son entertained for a while, and if he got stuck on something he’d just say, “Alexa, it’s not working!” and that usually seemed to fix the problem. Regardless, while it’s great for streaming video and reading audiobooks, it’s not really a gaming device — so don’t buy it with that expectation.

While Amazon’s app selection is pretty limited, Alexa’s is even more so. The Echo Show is limited to a select handful of apps known as Skills. While there are a few game options, it’s not gonna impress a kid who wants it mostly for games. Thankfully, however, most of the kid-friendly Skills are made available through the Amazon Kids subscription (which also makes it much easier for your child to navigate to those Skills) so it’s a good idea to keep the subscription until your child outgrows the device.

The camera is easy to access by asking Alexa to open it, or swiping left on the screen. It features a super streamlined video option so kids can record their own videos, and doesn’t every kid these days want to be a Youtuber? He also loves that he has his own device to make and receive video calls on, instead of having to use Mom’s phone.

Overall, it’s been totally magical for him, but he did get antsy after playing on it for a short while — which is normal for a 5-year-old. He understands that it’s not really a toy, but seems really excited to have a “grown-up” device that still looks like a T-rex.

Who shouldn’t buy it

The Echo Show 5 Kids probably won’t have the same appeal to older kids. The content on Amazon Kids is heavily targeted towards younger kids. BUT if you want the parental controls for your older kids and tweens, you can try it without the Amazon Kids subscription. If they’re not crazy about the juvenile look of the Echo Show 5 Kids, you can always make any Echo Show device a dedicated children’s device during setup to access expanded parental control options.

Unfortunately, the fact that it’s not mobile is also a drawback for a kids’ device. My son was fine sitting in one spot to play with it for a little bit, but he prefers something that can go where he goes. He also thought the cord was such a major hassle. If he only knew!

And if your kid’s not an Alexa user or wants to use the device mostly for games, the much more portable and kid-proof Fire 7 or Fire 8 Kids Edition tablet might be a better option. The same inexpensive Amazon Kids membership allows access to hundreds of fully functional games on an Amazon Fire tablet, while the Echo Show 5 Kids is basically just a tiny little TV-slash-radio with internet connectivity.

Plus, the tablet has the same parental controls and Amazon Kids functionality — and it can go anywhere and is housed in a drop, throw, kick, and bite-proof case. Go ahead, ask me how I know it’s bite-proof.

The Echo Show 5 Kids has major appeal for kids, and it’s perfect for your technologically inclined kid, especially if they use Alexa regularly. Parents (myself included) love the souped-up parental controls and included Amazon Kids subscription.

But kids will probably outgrow the Amazon Kids content on the Echo Show 5 Kids fairly quickly, and it’s also not a worthwhile purchase if your child is an avid gamer or doesn’t use Alexa much (or insists on toting around their fave device everywhere they go).

Regardless, it’s a great piece of tech to keep your kid connected (and protected).