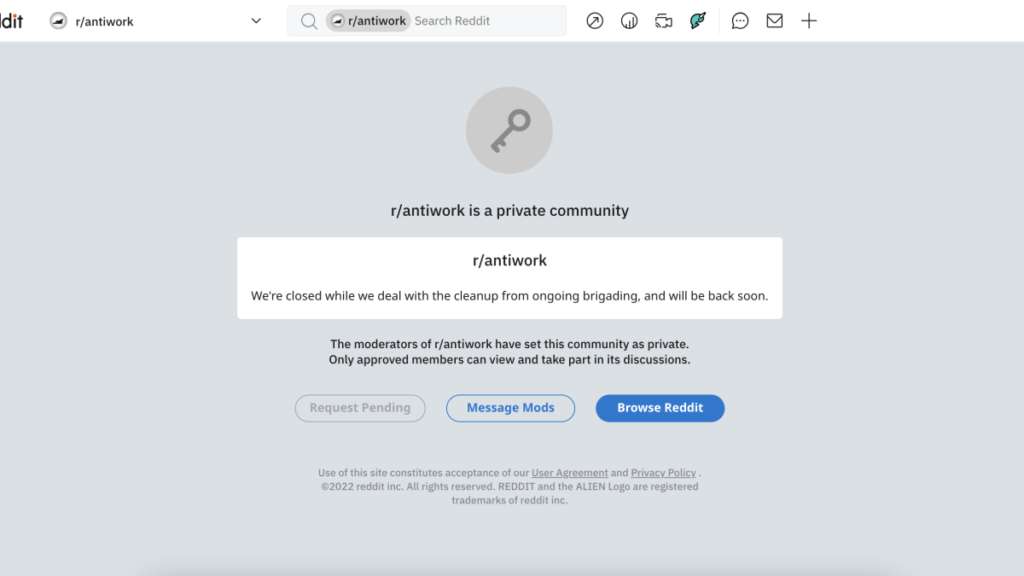 The anti-work subreddit went private Wednesday following a lousy Fox News interview between anchor (and notorious tool) Jesse Watters and one of the subreddit’s moderators, Doreen Ford. Watters and other Fox News hosts have argued that the subreddit is helping to fuel the Great Resignation, in which millions of workers nationwide have left their jobs.

The interview was not a great look for the burgeoning online movement.

“There are some misconceptions about the movement,” Ford said on Jesse Watters Primetime after the first question. “We’re a movement where we want to reduce the amount of work that people feel like they’re forced to do. And so we want to still put in effort. We want to put in labor, but we don’t want to necessarily be in a position where we feel trapped.”

Watters then asks Ford why supporters of the movement don’t simply quit their jobs, and wonders if Ford is “encouraging people to be lazy.”

“I think laziness is a virtue in a society where people constantly want you to be productive 24/7,” Ford said. “And it’s good to have rest. That doesn’t mean you should be resting all the time or not putting effort into things that you care about.”

Despite the movement’s name, she said that the concept of ‘not working’ isn’t really the central focus. Ford herself is currently employed as dog walker, working about 20 – 25 hours a week. When Watters asked what she might ideally want to do professionally, Ford said she’d like to teach philosophy and critical thinking. The interview mostly focused on Ford instead of the movement as a whole, and it makes the movement look like, well, a joke.

Screenshots of texts with your freaking boss are taking over Twitter

In the subreddit OutOfTheLoop, which helps users keep track of what is going on with Reddit, Reddit user Potatolantern said that people on the anti-work subreddit are “indignant” and frustrated that Ford was chosen to represent the movement and decided to do an interview with Fox News at all. A post on the subreddit (preserved by the Wayback Machine), however, shows Ford explaining how the other moderators decided she’d be best to do the interview because of her past media experience.

Wednesday morning, the anti-work subreddit was still public but as Ford’s interview gained traction, it went private. According to user luciagrace in the OutOfTheLoop subreddit, many of the posts and comments on r/antiwork were locked. Users were, allegedly, getting banned for discussing the interview. Eventually, the page released an FAQ thread about the Fox News incident, according to one user on r/OutOfTheLoop, but that was later deleted.

By Thursday morning, r/antiwork was made public again. In a statement the moderators said they “are planning to remove” Ford from her duties as a moderator.

“We thank her for building up the anti-work movement, but regarding the past incidents, we decided as a majority to remove her,” the statement read.

As for the state of the subreddit now, people are still upset. In one thread, user Inevitable-Currents called out the irony that moderators have “some authority” and “exerted it incorrectly and then immediately refused to acknowledge it or correct it on this sub which is literally dedicated to holding those who do exactly what you did accountable.” They encouraged people in the movement to put in the work by starting a union, donating to striking workers, and volunteering at local orgs.

“If your way of ‘helping’ is by thinking workers need ‘better messaging’ than you’ve already lost the plot and are likely doing more harm than good,” Inevitable-Currents wrote.

UPDATE: Jan. 27, 2022, 11:27 a.m. EST This article has been updated with a statement from r/antiwork’s moderators and additional community comments.