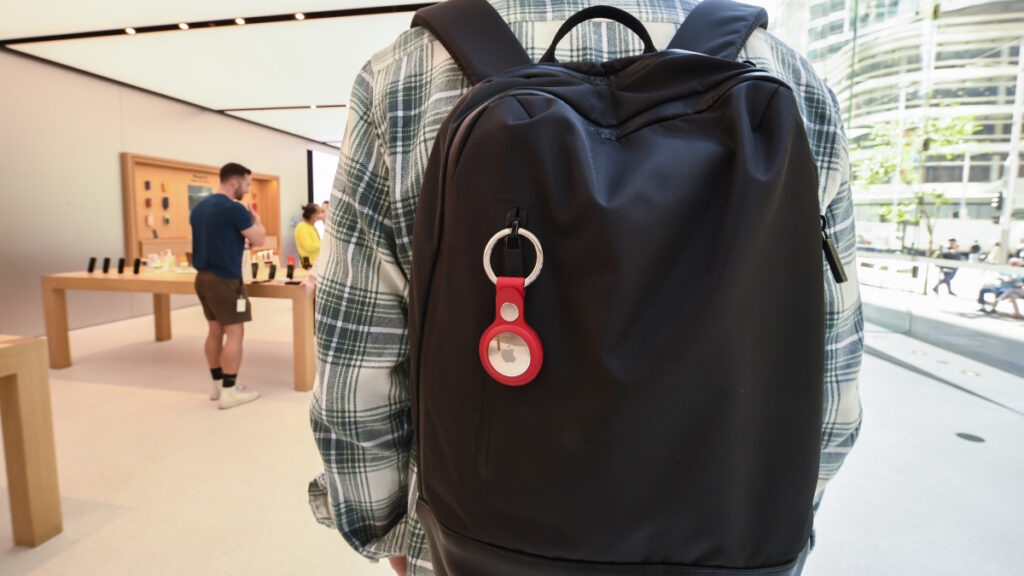 Apple has an AirTag problem

Imagine you’re driving home alone late at night after an evening out at a bar when suddenly your iPhone vibrates.

“AirTag Found Moving With You,” reads a notification on your iPhone. “The location of this AirTag can be seen by the owner.”

The roads are empty. There’s no other drivers in sight. And as you continue on your drive home, the notification pops up again and again on your iPhone.

AirTags are scarily good at tracking items and…people. I know because I tried.

Is someone following you? What exactly is going on here?

It’s a scary situation, and according to Twitter user @Sega__JEANAsis, who goes by Jeana on the platform, it happened to her. Jeana shared her ordeal in a viral Twitter thread and in a DM with Mashable. She has since made her account private.

Jeana shared her story about being tracked by an AirTag in a viral Twitter thread.
Credit: @Sega__JEANAsis / Twitter

Apple’s AirTags are a small Bluetooth device the company released earlier this year that are meant to track items that you may regularly displace. For example, drop one of these $30 devices in your wallet and the next time you can’t find it, you can just track it using the Find My app on your iPhone to discover it actually slipped into the seat of your car.

However, putting a tiny, relatively cheap tracking device on the market has led to some nefarious uses.

“So something kinda terrifying happened to me last night— someone attached an Apple AirTag to the underside of my front wheel well while I was inside a bar,” Jeana tweeted Saturday morning. 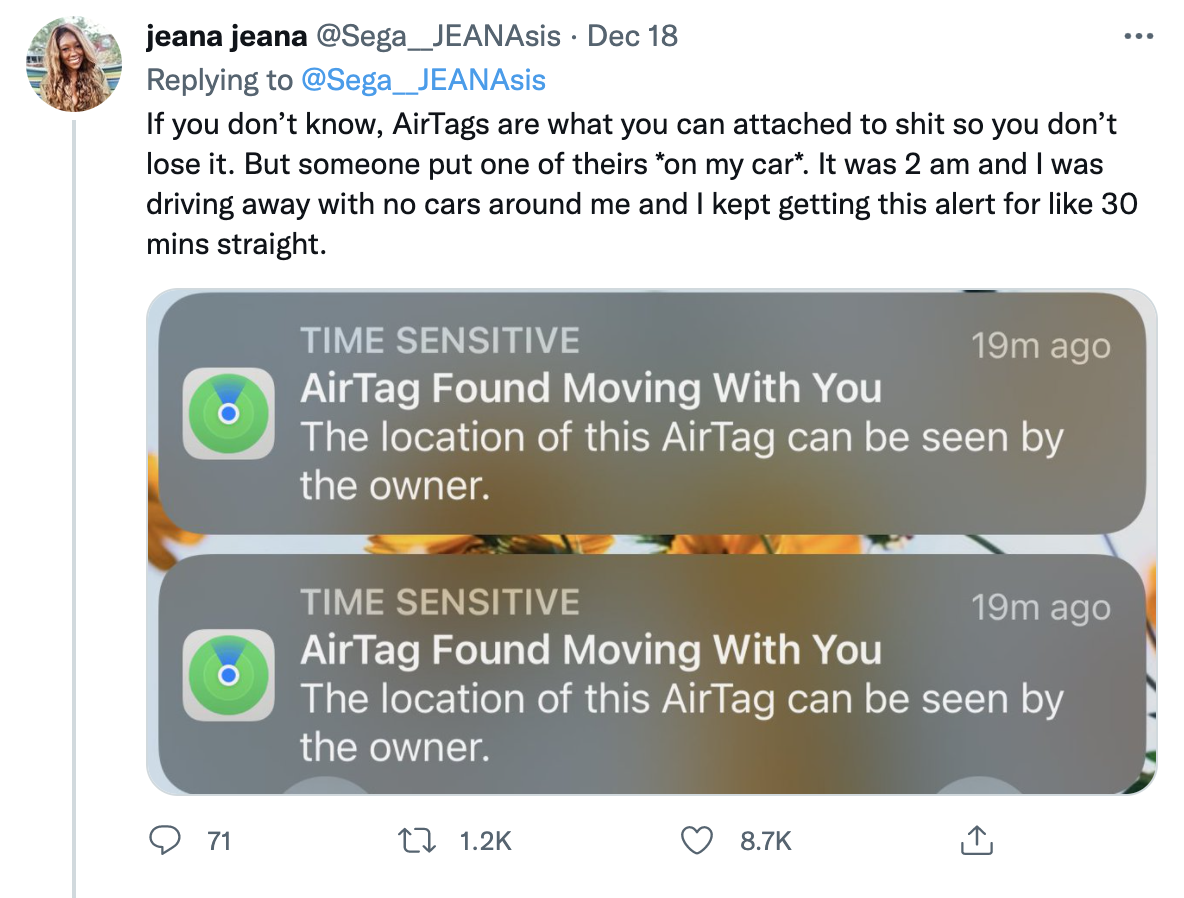 Apple warned Jeana she was possibly being tracked via notifications on her iPhone.
Credit: @Sega__JEANAsis / Twitter

According to Jeana, she received notifications on her iPhone for 30 minutes while driving in the early morning hours on Saturday. She checked her purse and her car but could not find the AirTag. At first, Jeana thought it was a false positive. She says she had received these AirTag notifications before in crowded areas in the past when she likely just happened to be in the vicinity of one of these tracking devices.

Yet, at 2 a.m. the roads she was driving on were empty and her iPhone kept showing her these notifications. Apple uses these notifications as a way of deterring bad actors from using the device to track other people. Apple does provide instructions for disabling a device that may be tracking them, but the incident spooked Jeana enough where she decided to not go home that night.

According to Jeana, “someone close” later checked her car and found an AirTag “stuck on the underside of my front passenger wheel well.”

Jeana’s experience was a scary one, but it’s also becoming more common.

Shortly after Apple released AirTags earlier this year, stories started spreading on social media platforms like TikTok concerning the tracking device being used to stalk women. To make things more complicated, Apple built these devices so that there is no way to identify the AirTag’s owner.

Apple did, however, realize AirTags could be weaponized by stalkers or abusive partners and took some precautions, such as the previously mentioned iPhone notifications. The company recently released an Android app that scans for unwanted AirTags so that non-iPhone users could be aware if they’re being tracked too, but the app isn’t perfect.

UPDATE: Dec. 21, 2021, 10:00 a.m. EST Apple provided the following statement to Mashable.
“We take customer safety very seriously and are committed to AirTag’s privacy and security,” said an Apple spokesperson. “AirTag is designed with a set of proactive features to discourage unwanted tracking — a first in the industry — and the Find My network includes a smart, tunable system with deterrents that applies to AirTag, as well as third-party products part of the Find My network accessory program. We are raising the bar on privacy for our users and the industry, and hope others will follow.”

On its website, Apple lays out the steps it takes to discourage unwanted tracking with AirTags.

“To discourage tracking without your knowledge, Find My will notify you if an unknown AirTag or other Find My network accessory is seen moving with you over time. An AirTag that isn’t with the person who registered it for an extended period of time will also play a sound when moved so you can find it, even if you don’t use an iOS device”

Apple also says that it “If you feel your safety is at risk, contact your local law enforcement who can work with Apple.”

If you find an unwanted AirTag, here’s how to disable it

Still, AirTags are increasingly being used for nefarious purposes.

Multiple instances have been reported in recent months concerning AirTags being used to aid criminals in car-related thefts.

While Jeana’s experience that she shared on Twitter sounded like the storyline from a horror movie, she shared with Mashable that she believes whoever put the AirTag on her vehicle was likely after her 2015 Lexus, and not her.

“I’m pretty sure someone was just trying to steal my car,” she explained in an online message. “I wasn’t parked close enough to the bar for someone to be able to associate me with my vehicle.”

Jeana told Mashable that she did inform her local police department via phone about her experience, even though she “technically wasn’t a victim of a crime.”

Mashable reached out to the police department of the major metropolitan city local to Jeana. In an email, they informed Mashable that “there isn’t currently a category for Apple Air Taggings” within their database. The fact that these unwanted “Air Taggings” are growing, yet still so new that data regarding their usage isn’t being tracked itself is certainly concerning.

Mashable has previously covered how to disabled an AirTag once you find you’re being tracked.