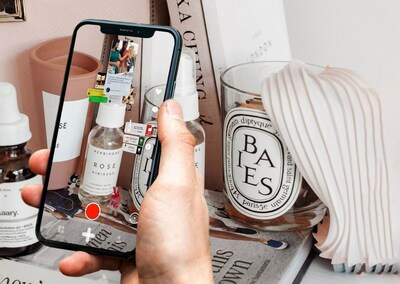 “This isn’t a scene from a movie”

SEOUL, South Korea, Jan. 5, 2023 /PRNewswire/ — AR specialist IT startup Arbeon plans to release its AR social media (app service) to the world for the first time at the CES 2023.

Let’s take a look at the features of this future communication method, “Arbeon,” that provides a digital experience on top of the objects that exist in the actual space.

“People scan the sneakers displayed in the store with the app. See a huge orca roaming around the sneakers, and short music that suits the sneakers plays on the back. People read through various users’ feeds, and spot a store with the lowest price for the sneakers, so purchase the pair right away. People scan the dish that was just served at the restaurant visited afterward. People see the real reviews of the dish, photos left by many couples, and a thank you message from the chef, along with side dish recommendations and a discount coupon. You leave your memory right above the dish with an AR cards.”

This is not a scene from a movie. This is what your daily life would be like after the release of the AR social media “Arbeon” app service.

The whole experience begins with “scanning the objects and space in front of your eyes” in the Arbeon app. The user can engage in a more realistic AR experience with One-Action, an object-scanning function. Through its proprietary technology, it unfolds the AR social media world, where users can create their AR content or watch others’ experiences as soon as they scan any object, including the ones that haven’t been learned.

In the AR-based realistic social media Arbeon, the user’s “current experience” of what they see, hear, and feel wherever they are, meets another person with the same experience and interest, allowing even more immersive social networking.

‘AR commerce’
One scan for the easiest purchasing experience.

Users can immediately find all the information they need to purchase a product, including product recommendations, lowest price search, product information, real reviews of those who purchased the product, and making a purchase, just with a single scan. They no longer need to look up each product in search engines or online stores to find other users’ reviews; they just need to scan.

The companies can publish their product advertisement, ingredient information, and promotion right above their products, allowing them to deliver their corporate messages more vibrantly at a closer distance to the precisely targeted customers and maximize the advertisement exposure effect at a low cost.

‘AR Cut’
Interact and share with a personalized AR character.

One of the biggest features of Arbeon is that it provides a friendlier environment of “AR,” which used to be an area of expertise in the past. Users can not only create their one-of-a-kind AR content but also share and sell it with the AR Cut function.

The AR content that the user draws becomes a lively 3D character. It can be used to communicate with other users’ 3D characters placed around the objects or as 3D emojis. When the demand to use the character grows, the user can sell it in an NFT form and have a chance to make a profit.

Arbeon, a daily service closest to your life, is to be released at the CES 2023

The Arbeon app can be called a genuine ‘Daily service’ as it shares every moment of the users, from social media, commerce, and AR content creation (AR Cut) to information search, entertainment, etc. “Arbeon will expand the daily experience of users and lead the new communication culture that has never been seen before,” said Carlton Myung, the CEO of Arbeon, about the global launch at the CES 2023. He added, “We will provide a greater value to the daily lives of all humankind around the world and become a global AR leading company.”

You can experience the development version of the Arbeon app service in advance by visiting the experience zones in various themes operated by the Arbeon exclusive booth at the CES 2023 in Tech East Central Hall.