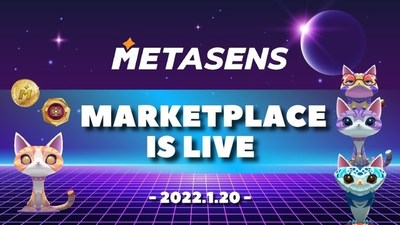 HONG KONG, Jan. 25, 2022 /PRNewswire/ — Metasens, the metaverse project under Imperium Technology Group (0776.HK, the Group), today announces that its NFT Marketplace has gone live first to its community members on January 20, together with the launch of the Metasens’ first GameFi blockchain game METASNAKE in three regions in the APAC. The launch has attracted 4000 users and players within four days from Hong Kong, Taiwan and the Philippines. Rolled out in the 4th quarter of 2021, Metasens is led by a young and vibrant team from Hong Kong and Taiwan, who are experienced in gaming and blockchain technology. The project aims to build an open GameFi platform in the form of a Universal Amusement Park together with global community and users, providing NFT marketplace and blockchain wallet. Metasens digital currency is also available (MSU and UCG). According to DappRadar, the number of blockchain games grew to more than 1300 active dapps by now. Differing from most of the single metaverses, Metasens is centered around Holosens, the core “planet” of this metaverse which connects multiple other planets orbiting around it, forming a complete cosmic galaxy. Every planet is an independent game genre, which will include RPG, STG, Shooting, A-AVG, Cards, Casual Social Games and so on. Users can freely travel between the planets through Holosens to enjoy the fun in the virtual world.

As the advance force of the Metasens universe, METASNAKE combines the concept of Snake, an arcade game originated in the 70s, with blockchain technology. Battling arena is also available in the METASNAKE planet, enabling players to start smoothly and interact with the global community. No pre-purchase of digital currency is required to play METASNAKE, largely lowering the entry barrier for people who are not familiar with blockchain and GameFi. In addition, the Metasens universe’s motto is “Play for Fun” instead of the traditional “Play to Earn” model of most GameFi projects, prioritizing the joyful and exciting journey that users will experience, “Earning” then becomes part of the joy rather than the primary and sole focus. 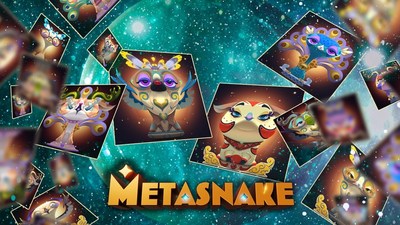 All characters in METASNAKE are Ancient Spirits carrying their own unique genetic codes. Each Ancient Spirit represents a unique NFT, it can breed with other Ancient Spirits, genes from the parents randomly pass on to the next generations.

Mr. Terry Yeung, Executive Director of Imperium Technology Group, newly appointed by the Group this month to lead the Metasens team with his seasoned experience in blockchain, NFT and GameFi, said, “METASNAKE is the first GameFi launched by Metasens, as a young brand, our vision is to integrate nostalgic games loved by different generations with blockchain and NFT technology to create a diverse yet unique metaverse amusement park for global users. We’d also like to transfer the knowledge of metaverse, blockchain and GameFi to the public in a light-hearted way for people to start more easily. We are now actively working on a range of games both inhouse and with external partners, and expect to launch more games within 2022.”

In the meantime, Metasens is actively developing a variety of games. The next game planet is expected to be launched in March, with several planet projects in the pipeline for the rest of the year, including independently developed games and jointly developed games with partners.

For more info and materials, please download at the following link:
https://drive.google.com/drive/folders/17xFzyz_F3GYn5BAUmgAq9_w8HXj_mBrr?usp=sharing

Metasens is the metaverse project rolled out by Imperium Technology Group (0776.HK) in the 4th quarter of 2021, it aims to provide an open GameFi platform, and build a Universal Amusement Park together with global community and players. The Metasens is centered around the Holosens, the core “planet” of this metaverse which connects multiple of other planets orbiting around it, forming a complete cosmic galaxy. Every planet is an independent game genre, which will include RPG, STG, Shooting, A-AVG, Cards, Casual Social Games and so on. The vision of Metasens is to integrate traditional games with blockchain and NFT technology to lower the entry barrier the public, meeting the entertainment needs of different age and demographic groups, and creating a diverse and unique metaverse for all.