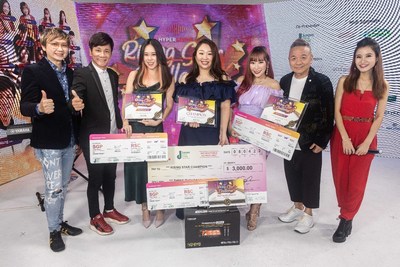 The talent contest had aimed to discover outstanding influencers in Singapore by setting a competitive stage for contestants to create interesting content and showcase their creativity, talent and personality. Their scores were tabulated after multiple rounds, which included livestreaming and live-selling sessions, head-to-head PK matches and a charity fundraising event, which successfully raised over $51,000 for NTUC-U Care Fund last month.

After a gruelling three-week period where contestants were put through a series of challenges, the Grand Final hosted by popular female artiste Lee Pei Fen was broadcasted virtually. The show featured local singer-songwriter Dr. Sean Wong who is also the Co-founder and CEO of Hyperlive Entertainment, top Singaporean livestreamer Wang Lei alongside award-winning radio DJ and TV personality Marcus Chin as celebrity judges. Sixteen finalists took the stage on the day to display their creativity and talent during the three-hour program.

The Grand Champion Sim Fang Huey eventually won the hearts of the viewers and judges with her talent, eloquence, wit and poise. She was the recipient of the Most Popular Influencer Award and took home the winner’s cheque of $3,000 as well as an all-expenses-paid trip to Korea to join Wang Lei during his live-selling show. These were kindly sponsored by Jurong Cold Store, Lovelotsdiamond and Edenlogy. Other prizes included a Powerhouse home karaoke system and sponsored hair services by Jeric Salon. The first and second runners-up were Cindy Chang and Shirleen Ang respectively. They will be joining Fang Huey for the trip to Korea, which is slated to happen sometime in the middle of this year. A number of contestants will also be offered artist management contracts.

Aside from the Rising Star Challenge, HyperLive Entertainment also runs a host of prestigious beauty pageants in Singapore and Malaysia. These highly-popular pageants will be part of the Inaugural HyperLive Festivals held in both countries this year. Registration for the HyperLive Festival contests is now open, and aspiring beauty queens and performing arts talents may obtain more information on the events via HyperLive’s official social media channels and website.

Since its launch last August, HyperLive Entertainment has embarked on an ambitious journey to make HyperLive.tv the most exciting interactive platform for live authentic content and has produced numerous successful star-studded events in the past months. The company further revealed that a 3D digital concert featuring top local singers will be held in June later this year.

HyperLive is a tech-enabled creative media company specializing in the production and distribution of interactive, entertaining media content to create brand value and digital intellectual properties. HyperLive.tv is a licensed niche television platform that combines music, entertainment and lifestyle events with highly interactive features that make for an exclusive and engaging viewing experience.