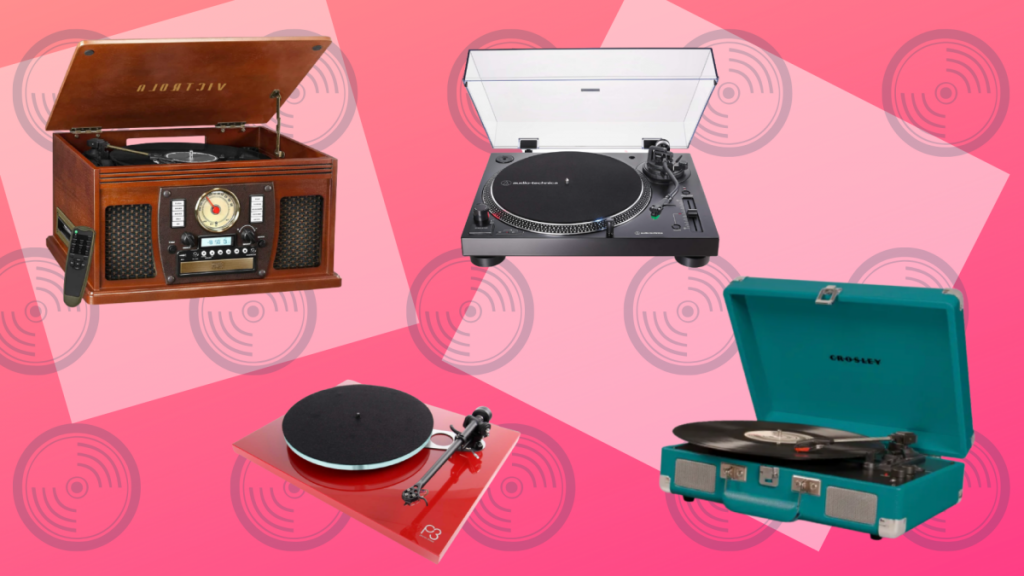 Most music fans can agree on one thing: Some music just sounds better on vinyl. In fact, this is a large part of why record players have not disappeared, even as music has gone more digital. If anything, sales of turntables have gone up since 2010, with over 75 thousand sold in the US in 2020.

Of course, record players aren’t just popular with audiophiles willing to spend hundreds (or thousands) of dollars on a luxury record player. They’re popular with college students, homeowners looking for a classy accessory for their living room, and mixmasters.

As a result, there are a variety of different record players available on the market — and a whole range of prices, with some costing thousands of dollars. But, unless you’re a pro DJ or true audiophile, you don’t need to spend an arm and a leg to find one that delivers quality sound.

What types of record players are out there?

There are two main types of turntables: belt-drive and direct-drive.

Belt-drive turntables use an elastic belt to spin the turntable platter, which means that they can take a few seconds to get up to full speed. However, they’re very popular for a variety of reasons. They’re quieter, precise, and resistant to vibrations since the elastic absorbs shocks. They are also said to deliver better sound quality. However, they have less torque and less accurate playback speeds.

On direct drives, the platter of the record player is attached directly to the player’s motor. This allows the record player to start up faster and play at a more consistent speed, with more torque. Direct drive record players are durable since the belt won’t wear out and are reliable. However, they tend to have motor vibration noises, and the sound is said to not be as great.

What should I consider before buying a record player?

Ultimately, what you want out of your record player will vary a little based on your needs. However, here are some things you might want to prioritize while you’re shopping:

If you’re spending more than $100 on a turntable, chances are you want something that will last. As a result, you’re going to want to look for something that’s built to last. Look for a turntable that’s solidly built with real wood, metal, and minimal plastic. You also probably want to look for one that has a more expensive cartridge so that it doesn’t damage your vinyl.

Damping is what the manufacturer of your turntable uses to combat vibrations while playing your records. Some of this damping will depend on whether you get a belt-driven or direct-drive turntable (remember, belt-driven combats vibration and noise better.) The motor type of your record player will also play a part.

What you use it for

If you’re a DJ (professional or amateur), you’re probably going to want a direct-drive turntable because it is more reliable with its speed. You also have more control over how you adjust that speed and, since the platter is attached to the motor, you can scratch or creatively manipulate the turntable.

Traditionally, record players needed to have their output boosted by a phono preamp, but this is an additional expense. Many modern (and budget) turntables have this built-in.

Some newer record players offer Bluetooth connectivity, which means you can connect them to your Bluetooth smart speakers. Others allow you to connect via USB to your computer in order to convert your old record into a digital format.

Vinyl record players’ speeds are measured in rpm, which stands for revolutions per minute. They can come in three speeds (or play all three): 33 ⅓, 45, and 78rpm.

Until World War II, the first records were played at 78 rpm and could only hold one song.

After the war, commercial records started being produced at 33 ⅓ rpm speeds. These new records did have grooves, so they could play multiple sounds and they could hold about 22 minutes of music on each side. That’s why they started being called LPs (long playing). These records were smaller than the original ones. 45 rpm records were also smaller than the old 78s, allowing them to be produced less expensively.

Today, you need a special needle to play a 78 rpm record — which means not all record players can play at this faster speed.

If you don’t feel like owning a lot of different devices to play all your music, you might be interested in an entertainment system that also contains a CD player, cassette player, radio or Bluetooth connectivity to play your digital or streaming music.

Are there budget record players?

These record players aren’t for true audiophiles — the sound won’t be as rich — because they are designed for the casual listener or student.

The good news is: budget record players tend to look cool. Lots of them are made to mimic vintage looks of the ’60s and ’70s, or they’re made in fun, dynamic colors to fit your home decor.