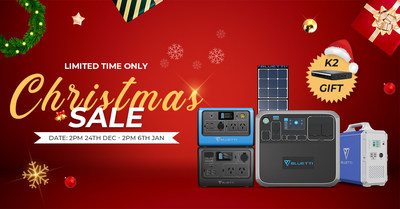 Among all those hot deals, our top pick would absolutely be the powerful, power beast – AC200P.

After pulling in a staggering $6.7M USD from crowdfunding in July 2020 and with tens of thousands of AC200P units sold within the past year, BLUETTI is now offering $2599.99 for this portable solar generator. Packed with 2000 watts of continuous AC pure-sine wave power, an enormous 2000Wh of capacity, and utilizing the most durable, safest LiFePO4 chemistry, the BLUETTI AC200P is undoubtedly the most competitive solar generator for its price. It can power all your needs from a household fridge to an 8,000 BTU portable air conditioner without breaking a sweat. It can be charged at blistering speeds by solar at up to a stunning 700W. Users can charge the unit from zero to full in less than 4 hours with free solar power alone!

The BLUETTI EB150 is an all-in-one solar generator which originally launched in 2019. It is well-loved by customers worldwide for over two years. Covered by a solid aluminum case and featured with a 1000Watt pure sine wave inverter, it is capable of powering most of appliances outdoors and indoors. The 1,500Wh battery capacity for the EB150 makes certain you do not need to worry about power for long camping or hiking trips. The BLUETTI EB150’s built-in MPPT controller also supports up to 500 watts of solar input. With prime sunshine, the EB150 can be charged from zero to full in as little as 4.5 hours.

EB70 to the delight of RV enthusiasts, outdoor campers and those who want a compact power station they can take with them everywhere. It comes in two colors and boasts high-end power storage features not found among the competition. With 2 x PURE SINE WAVE AC outlets, 2 x 100W USB-C ports, 2 x USB-A ports, 1 x Regulated 12V car socket, 2 x DC ports, and 1x wireless charging pad, EB70 can power most of your outdoor/home appliances under 1000W.

The BLUETTI EB55 is packed with a 537Wh lithium-iron phosphate (LiFePO4) battery pack – one of the most stable and durable battery chemistries in the industry. With BLUETTI’s exclusively developed BMS controller, the whole unit can last over 2500+ charge cycles before the detained capacity dropped to 80%. There is an array of AC/DC outlets on the front panel, making it possible to run almost all your 5V/12V loads and basic AC appliances for the road. An 100W USB-C outlet that complies with PD3.0 protocol can also charge your laptop or any USB-C powered devices as quickly as possible.