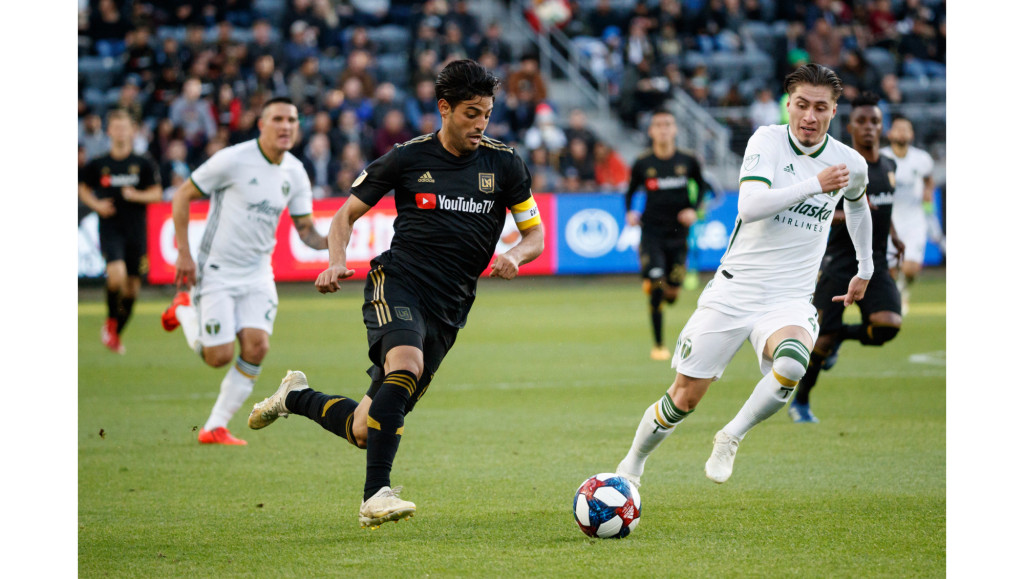 When Carlos Vela steps onto any field, the 32-year-old captain of the Los Angeles Football Club has two things on his mind: enjoying himself and finding ways to create special moments fans will never forget.

Vela’s next chance to add to his list of memorable highlights comes with the start of LAFC’s fourth season on Saturday afternoon when Major League Soccer newcomer Austin FC visits Banc of California Stadium.

For the second year in a row, LAFC will face off against an MLS expansion team making its debut.

LAFC defeated Inter Miami FC, 1-0, last year behind a class finish from Vela’s left foot after the Mexican forward rambled through the visiting defense and from outside the box chipped the keeper just before halftime.

“The master of all he surveys,” ESPN play-by-play announcer Jon Champion said after the forward’s deft finish.

Who could argue otherwise?

Vela has lorded over MLS since LAFC’s expansion year in 2018. The club’s first signing wowed fans, media, other players and coaches with his silky play and consistently brilliant goal-scoring skills.

The game-winner against Miami was Vela’s 22nd goal in his last 22 regular-season appearances at home dating to a scoreless draw against the Chicago Fire in 2019.

Off the strength of LAFC’s second incredible season, expectations could not have been higher for Vela and the club leading up to the Miami match.

The MLS season was suspended after the second week. When competition resumed with a mid-summer tournament in Florida, Vela opted to remain in Los Angeles to support his pregnant wife.

Returning to the field six months after the Miami match against the rival L.A. Galaxy, Vela was substituted off in the second half with a knee injury that sidelined him for another three months.

The dynamic Mexican finished with four goals in seven regular-season appearances, a fraction of the record-setting 34 he netted in 31 games the previous year.

Firmly entrenched as captain after accepting the role midway through the 2018 season, Vela is one of seven players still with the club who contributed to its Day 1 victory at Seattle.

Playing without the 2019 MLS MVP, LAFC leaned on established players and newcomers to establish a winning formula that was slow to emerge until Vela’s return helped spark a run to the CONCACAF Champions League final in December.

Rossi, the young Uruguayan attacker who claimed the 2020 MLS Golden Boot award, scored the winner in Seattle in 2018 off a pass from Vela. He has not stopped scoring since then, attracting interest from a variety of big teams in Europe and South America.

Talented Colombian midfielder Atuesta owns the middle of the field for LAFC, and, other than Vela, is generally considered the club’s most important player, and he too has received serious interest.

Kaye, of Canada, has regularly asserted himself on and off the pitch – speaking out as one of the club’s most inclusive voices while helping less seasoned players grow into the LAFC way.

Living up to his last name the last three years, Blessing, the Ghanian utilityman, can play anywhere in LAFC’s system.

Blackmon, the club’s first MLS draft pick, is a reliable starting outside defender and continues to prove valuable.

By all accounts, Harvey was a veteran defender leading into the inaugural 2018 season, and he has been encouraged to embrace coaching responsibilities as his playing time wanes.

When Harvey joined LAFC it was his third experience on an MLS expansion team. He walked in knowing LAFC head of soccer operations John Thorrington and knowing of head coach Bob Bradley.

Like everyone else, Harvey went through a steep learning curve to digest Bradley’s system as veterans meshed with young talent and a prime Vela to secure record-setting results in their first year.

The next season marked a significant improvement with an avalanche of goals and points. Aided by a stout defense the club secured its first and only trophy, the 2019 Supporters’ Shield.

Then the strangeness of professional sports in a pandemic, and the difficulties that accompanied such an effort, made 2020 a year to learn from instead of celebrate.

“Having that environment and culture that we created in the first two years that was disrupted in 2020, and hoping to just get back to that,” Harvey said, “that feels like what everyone is really eager for right now.”

For Vela and his teammates, for the Black & Gold newcomers, for the fresh-faced talent who rose up to the senior team via the club’s youth academy, for the coaching staff, including Bradley who is in the final year of his original contract, Saturday marks the first step in reclaiming what they built before improving from there.

Where: Banc of California Stadium