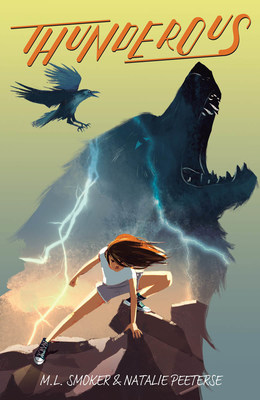 BOCA RATON, Fla., Feb. 9, 2022 /PRNewswire/ — Curiosity Ink Media – the family entertainment engine for Grom Social Enterprises, Inc. (NASDAQ: GROM), has secured Montana Poet Laureate M.L. Smoker to write and consult for the Thunderous graphic novel series, debuting in partnership with publisher Dynamite Entertainment in April 2022. Her co-writer on the project is Natalie Peeterse, also a poet and independent publisher. The original, new intellectual property (IP) franchise follows the unexpected adventures of an indigenous teen’s journey into a special world where new friends and foes are discovered. In this unpredictable and sometimes perilous venture she learns to more fully appreciate, embrace, and champion her family’s proud heritage. The graphic novel will debut in tandem with Independent Book Store Day, a national celebration of independent bookstores to be held on Saturday, April 30. The announcement was made today by Curiosity Ink Media’s EVP & Publisher, Jon Rosenberg.

“Forming alliances with indigenous cultural leaders allows us to share stories that are routinely overlooked in popular culture.”

Curiosity’s alliance with Smoker and Peeterse builds on the company’s mission to identify and share authentic stories and voices from various milieus. The company recently announced a slate of diverse programming, including new musical preschool series, Aloha Hōkū, based on the songs and spirit of Hawaiian ukulele player Honoka Katayama. Smoker, a member of the Nakoda, Dakota, Lakota tribe is currently Poet Laureate for the state of Montana. Her free verse poems focus on personal loss and identity and engage Native American history, language, and culture.

“Forming alliances with indigenous cultural leaders allows us to share stories that are routinely overlooked in popular culture and have the potential to be transformative for young readers,” said Rosenberg.  “M.L. Smoker brings an unparalleled authenticity and artistry to storytelling that will bring richness, heart and soul to this new franchise.”

“The importance of new narratives that are formed from the creativity, resilience and power of Native American communities are necessary to correct the pervasive and damaging stereotypes, misconceptions and ideas that exist in this country about us,” said Smoker.  “I hope this is a story that resonates for many children and, in particular, that some Native youth will see themselves reflected in literature and believe they can be their own authors, painters, musicians, and creators in the future. Because representation matters.”

“Dynamite is proud to work with so many writers, artists and partners from diverse backgrounds, as our primary goal is to help facilitate and deliver unique compelling stories across all media to fans and working with Laureate M.L. Smoker and the creative team helps bring awareness and grows the audience,” said Nick Barrucci, Dynamite CEO & Publisher. “I personally cannot wait to read more of Thunderous and what Smoker and the team have crafted, and for many others to experience this wonderful tale.”

Smoker served as Montana’s Director of Indian Education for nearly a decade and, in 2015, was named the Indian Educator of the Year in addition to being appointed to the National Advisory Council on Indian Education by President Barack Obama. She currently works at Education Northwest as a practice expert in Indian Education. She received a regional Emmy award for her work as a writer/consultant on the PBS documentary Indian Relay.

Thunderous centers on Aiyana, a South Dakota teenager who fails to see a connection between her family’s Indigenous culture and her life in the modern world, resulting in tension with her grandmother, a proud bearer of the family’s history and heritage. As the story progresses, Aiyana finds herself accidentally transported to a  new and unfamiliar world where she begins to recognize how understanding her Lakota cultural teachings and stories are the very tools she needs to survive and return home. The book version of Thunderous dovetails into Curiosity’s recently announced publishing program in partnership with Dynamite Entertainment to develop a slate of printed content rooted in Curiosity’s original IP, as well as cultivating print titles on behalf of other entertainment brands.

About Dynamite Entertainment
Dynamite was founded in 2004 and is home to several best-selling comic book titles and properties, including The Boys, The Shadow, Red Sonja, Warlord of Mars, Bionic Man, A Game of Thrones, and more. Dynamite owns and controls an extensive library with over 3,000 characters (which includes the Harris Comics and Chaos Comics properties), such as Vampirella, Pantha, Evil Ernie, Smiley the Psychotic Button, Chastity, and Peter Cannon: Thunderbolt. In addition to their critically acclaimed titles and bestselling comics, Dynamite works with some of the most high-profile creators in comics and entertainment, including Gail Simone, Christopher Priest, Leah Moore, Kevin Smith, David Walker, Vita Ayala, Danny Lore, Neil Gaiman, Garth Ennis, Darick Robertson, Mark Russell, Brandon Thomas, Amy Chu, Reginald Hudlin, Nancy Collins, David Walker, Steve Orlando, Greg Pak, Jenny Frison, Matt Wagner, and a host of up-and-coming new talent. Dynamite is consistently ranked in the upper tiers of comic book publishers and several of their titles – including Alex Ross and Jim Krueger’s Project Superpowers – have debuted in the Top Ten lists produced by Diamond Comics Distributors. In 2005, Diamond awarded the company a GEM award for Best New Publisher and another GEM in 2006 for Comics Publisher of the Year (under 5%) and again in 2011. The company has also been nominated for and won several industry awards, including the prestigious Harvey and Eisner Awards.

About Grom Social Enterprises, Inc.
Grom Social Enterprises, Inc. is a growing social media platform and original content provider of entertainment for children under 13 years of age, which provides safe and secure digital environments for kids that can be monitored by their parents or guardians. The Company has several operating subsidiaries, including Grom Social, which delivers its content through mobile and desktop environments (web portal and apps) that entertain children, let them interact with friends, access relevant news, and play proprietary games while teaching them about being good digital citizens. The Company owns and operates Top Draw Animation, which produces award-winning animation content for some of the largest international media companies in the world. Grom also includes Grom Educational Services, which has provided web filtering services for K-12 schools, government and private businesses. For more information, please visit gromsocial.com.