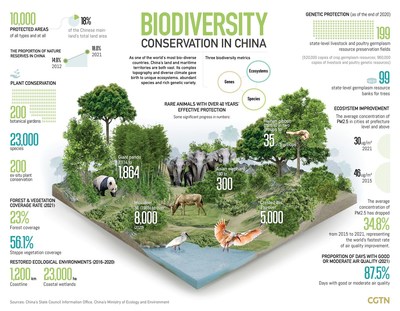 BEIJING, Dec. 18, 2022 /CNW/ — The high-level segment of the second part of the 15th meeting of the Conference of the Parties to the Convention on Biological Diversity (COP15) concluded in Montreal, Canada, on Saturday.

The meeting has played a very important role in promoting the negotiation process of the COP15, said Huang Runqiu, COP15 president and China’s minister of ecology and environment.

“China will continue to play its role while holding the COP15 presidency to help form synergy from all parties, close gaps and build consensus to reach an ambitious, realistic and balanced framework that the international community has been expecting,” he added.

“We must work together to promote harmonious co-existence between man and Nature, build a community of all life on the Earth, and create a clean and beautiful world for us all,” said Chinese President Xi Jinping at the opening ceremony of the high-level segment earlier on Thursday.

According to Huang, the address made by Xi is inspirational to the negotiators. A total of 190 representatives made active contributions to the development of the post-2020 global biodiversity framework. They expressed a strong political will to reach an adoption and implementation of it.

On December 13, the United Nations has recognized China’s “Shan-Shui Initiative” to restore 10 million hectares of ecosystems across the country as one of 10 pioneering projects to preserve the nature. The initiative honored as World Restoration Flagship. This ambitious initiative combines 75 large-scale projects, from mountains to coastal estuaries, across the world’s most populous nation.

Since the beginning of the 13th Five-Year Plan period (2016-2020), China has implemented 44 projects of “Shan-Shui Initiative,” and completed ecological protection and restoration of more than 3.5 million hectares.

According to the white paper on Biodiversity Conservation, China has set up 10 pilot programs for the national park system since 2015, covering an area of 2.2 million hectares. A variety of endangered species, such as giant pandas and Tibetan antelopes, are well protected in the area. Besides, China has established nearly 10,000 nature reserves, accounting for about 18 percent of the total land area.

So far, nearly 200 botanical gardens and 250 wildlife rescue and breeding bases were established, with approximately 23,000 plant species and over 60 endangered animal species preserved.

In the future, China will continue to advance ecological progress, and plan its development in the context of promoting harmonious co-existence between man and Nature, Xi said.