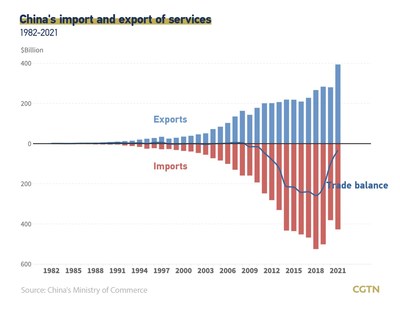 BEIJING, Sept. 5, 2022 /CNW/ — With the 2022 China International Fair for Trade in Services (CIFTIS) drawing to a close on Monday in Beijing, the country has sent a signal of its unwavering determination to push for a broader and deeper opening-up.

Titled “Cooperate for better development, innovate for a greener future”, this year’s event features an exhibition area of 152,000 square meters with the participation of more than 2,400 companies, including over 400 Global Fortune 500 companies and industry-leading enterprises.

Data from the Chinese Ministry of Commerce (MOC) showed that a total of 1,339 projects were signed, among which 513 were construction projects, 175 investment deals, 128 strategic agreements, and 173 first-launch products.

The CIFTIS is a crucial platform for China to expand opening-up, deepen cooperation and pioneer innovation, Chinese President Xi Jinping noted in a congratulatory letter to the 2022 CIFTIS Wednesday.

He voiced the country’s willingness to work with other countries to uphold real multilateralism, inclusiveness and win-win cooperation, and jointly promote the open and shared services economy to inject impetus into the recovery of the global economy.

This year’s CIFTIS has set up an environmental services section for the first time. It’s focusing on green development, amid the country’s efforts to achieve its carbon peak and carbon neutrality goals.

This section covers an area of 16,700 square meters and focuses on topics such as low-carbon energy, the climate and carbon economy, and carbon neutrality and green technology.

“Visions will come true only when we act on them,” Xi noted in a written statement to the 26th United Nations Conference of Parties on Climate Change last year as China has seen remarkable progress in energy saving and carbon reduction over the past decade.

By 2021, China’s energy consumption per unit of GDP has plunged 26.2 percent from 2012 and has reduced its carbon intensity by 34 percent in the past decade.

China’s services trade has delivered a meteoric expansion with the added-value of China’s services sector soaring 1.49 times over the past 10 years and cumulative trade in services exceeding $4 trillion.

Overseas investors also find sweet spots in the growing Chinese services sector. The MOC said China’s actual use of foreign investment in 2021 surged by 14.9 percent year-on-year to about 1.15 trillion yuan ($180.72 billion), of which the services sector accounted for 79 percent of the total.

In his congratulatory letter, the Chinese president also pledged that the country stays committed to promoting broadening market access in the services sector, facilitating opening-up in cross-border services trade, and striving to establish a high-standard opening-up system for the services sector.

In his congratulatory letter, Xi pointed out the CIFTIS making active contributions to the development of global services and services trade.

Addressing the Global Trade in Services Summit of the 2022 CIFTIS on Wednesday, World Trade Organization (WTO) Director-General Ngozi Okonjo-Iweala stressed today’s world economy is increasingly driven by the services sector, and with the accelerating digitalization of services trade, the share of services trade in global trade will continue to rise.

China’s services trade has had an average annual growth rate of 6.1 percent over the past decade, 3.1 percentage points higher than the global level, per the Commerce Ministry. The country’s services trade volume has held the second spot globally for eight years in a row.

Currently, more than 200 countries and regions have services trade with China.

The holding of CIFTIS fully demonstrates China’s commitment to further opening up its services sector, which is welcomed by the world, Raja Dato‘ Nushirwan Zainal Abidin, Malaysian Ambassador to China told CGTN.