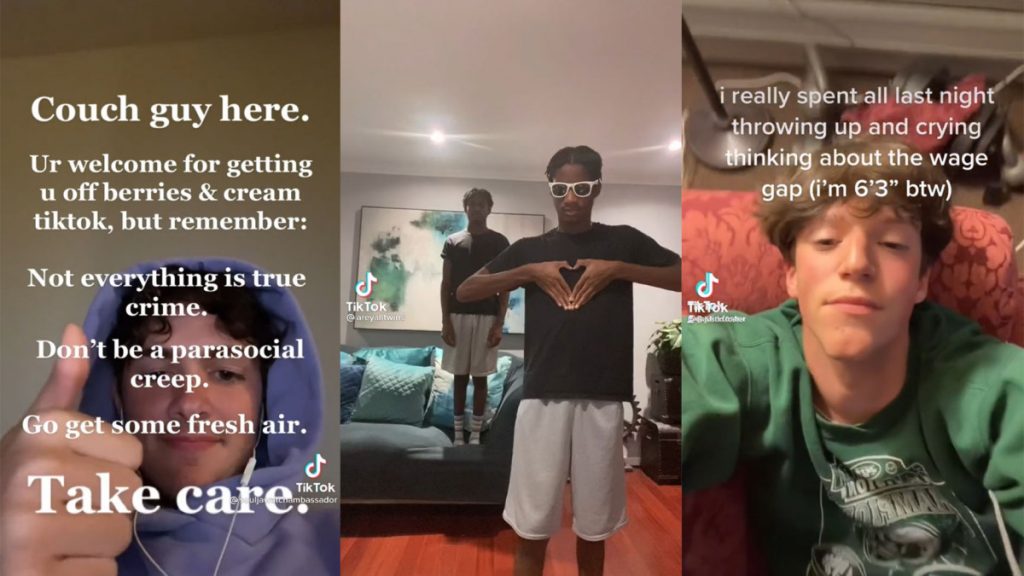 Couch guy, being 6’3”, TWINNEM, and other things that went viral on TikTok this week

Welcome to this week in TikTok where I watch TikTok all week, so you don’t have to! Every week I will unpack the past week’s TikTok trends to keep people in loop about what’s going on with Gen-Z’s favorite app. This week is all about being 6’3”, Megan Thee Stallion, and couch guy.

One trend absolutely taking over my For You Page are text-based videos that say something the person thinks will attract a potential partner and are usually followed by some desirable physical attribute in parentheses.

The first video of this trend was posted by @justin.foster on Oct. 4. His video reads “i really spent all last night throwing up and crying thinking about the wage gap (i’m 6’3″ btw).” There are now over 23,000 videos posted under his sound.

Some of the videos posted by targeted at women are in poor taste.
Credit: tiktok / justin.foster

Some of the videos posted by men aimed at women are kind of depressing like Foster’s. Another video made by @neroman1217 read “spent all of last night crying and throwing up about the erasure of women in science due to systemic sexism (i’m 6’8 btw).” He has since deleted the video and made his account private. These videos take serious issues and make caring about them into a joke to get laid.

This trend is at its best when the content is more lighthearted…and directed at straight men. User @brendaullrichhh posted one that reads “Thinking about how that football team lost that football game that one time (I’m a natural redhead with a fat a$$ btw).”

I’ll admit I fell for one video before I realized it was part of this trend. It was posted by @ri_smoochie and reads “been crying all morning thinking about how nobody takes the cultural impact one direction had on music and popular culture seriously enough.” I was like “omg king is making points!” Then I noticed that in parentheses at the bottom the video it said “I’m 6’1″ and was gifted a magical bean that will grow into a giant bean stock btw,” and was disappointed in myself for being fooled.

You know it’s your girl

The videos made to this sound have two people lip synching the interview and the first person in the video says “oh, oh, oh, oh, oh, oh, oh I know it ain’t, I know it ain’t, it’s the Stallion,” and then the camera pans to the second person who delivers the last line, “you know it’s your girl.” The videos are overlaid with text describing the situation where you’re excited to see someone and they tend to be situations where there is no reason to be so excited, but they are.

A video posted by @itz.stormyyy says “when you go to the bathroom during class and u see yo friend.” Another posted by @missmoo23 reads “us every time our roommates boyfriend comes over.” These videos are all about being excited to see someone.
Credit: tiktok / itz.stormyyy

Two popular songs on TikTok this week are “TWINNEM” by Coi and “Lucky” by Britney Spears. “TWINNEM” has over a million TikToks made to the sound and “Lucky” has over 20,000.

There are two trends set to “TWINNEM,” the first has users testing if they have knees like Megan in reference to rapper, Megan thee Stallion. The knees like Megan trend initially was set to the song “Knees like Megan” by Mouse on Tha Track and had users squatting low to the ground and twerking, but in the past couple of weeks the trend has evolved and now users are making videos to “TWINNEM” where they slowly squat down to the beat of the song.

The other trend set to “TWINNEM” has users doing a dance created by @areyalltwins that acts out the lyrics of the song. These videos are a fun celebration of friendship and I can’t help, but watch each video all the way through.

The “Lucky” trend isolates the part of the Spears’ song where she says, “this is a story about a girl named lucky” and each video has text that fits with the theme of the lyric, like @offbrandshakira’s video that reads, “when you find out he was cheating a day before the wedding and you can still return the dress because you left the tags on.”

Who is couch guy?

On Sept. 21, TikTok user @laurenzarras posted an awkward video of her surprising her long-distance boyfriend at college. Zarras had no idea the video would end up garnering over 60 million views and spark an inescapable and invasive discourse over her relationship on the app. In the past three weeks couch guy TikTok has become its own subculture with three distinct types of videos responding to Zarras’ original video. The hashtag #couchguy has over 750 million views. For a 10-second video, the people of TikTok have a lot to say about it.

In the original video, Zarras walks into her boyfriend Robbie’s apartment where he is sitting on a couch with three other girls, thus his nickname, couch guy. His unenthusiastic reaction to Zarras’ surprise made him the center of conversations on TikTok. This ten-second video has been heavily analyzed by TikTok users.

Zarras’ video has over 128,000 comments and most are along the lines of “he hugged her like she was his aunt at Christmas dinner” and “You can FEEL the awkward tension bro.” In response to the comments on the video, Zarras commented “breaks my heart that people can watch a special moment and bring so much negativity. please think before you assume anything about my relationship.”

The reactions to Zarras’ video don’t end in the comment section. The video inspired a slew of extremely popular parody videos using the same sound as Zarras’ original video, “Still Falling for You” by Ellie Goulding. One parody posted by @mdsnrh is captioned “couch guy on his wedding day” and shows a bride walking into a room where the groom is sitting on a couch with three girls, his mannerisms replicating couch guy’s to a tee. The wedding parody has over three million likes and over 16 million views. Another parody posted by @gabriellekraus got more likes than the original and shows the boyfriend she’s surprising with another girl.

The couch guy video also prompted users to post their own videos of them surprising their long-distance boyfriends. In these videos the boyfriends are elated to see their girlfriends. When they’re compared to the original couch guy, his disinterest in his girlfriend becomes obvious. The captions on these videos are all something like “how couch guy should have reacted.” The most popular of the genre was posted by @gracevanderpool8 and has garnered over 71 million views, surpassing the original video in popularity. Her video is captioned “may I present to you a ~different~ kind of couch guy” as her boyfriend is also sitting on the couch when she surprises him. Her boyfriend is shocked and excited to see her and almost immediately pulls her onto his lap. There is genuine excitement on this couch guy’s face! This video could not be more different than the original.

The real meat of the couch guy videos are people dissecting the original video to prove that couch guy is cheating on his girlfriend or at least not that into her. People are bringing the same energy they brought to trying to solve Gabby Petito’s disappearance, but this time they are trying to uncover the truth of a long-distance college relationship. Users are pulling out all the stops to prove that couch guy is up to no good. Some posted slowed down versions of the original video where they analyze the minutia of it.

In a video posted by @kimcastro she makes a popular allegation that couch guy’s phone was in the hand of the girl next to him when Zarras arrives. Then the girl subtly passes back the phone. I’ve seen dozens of videos trying to show her pass the phone, but I still don’t see it and I don’t really understand why her holding his phone would prove anything. There are similar videos trying to prove that the girl next to couch guy has her hand on his back. Again I am unconvinced by a zoomed in pixelated photo that her hand was on his back. Another detail users have fixated on is the hair tie on his wrist, the argument there being that couch guy doesn’t have long hair, so the hair tie belongs to one of the girls he’s sitting with.

Zarras responded to these theories with a video where she says “y’all are driving me crazy with this phone comment. Not that I should be proving anything to you guys, but just so these stop.” She proceeded to do her own slo-mo analysis of the video.

Couch guy broke his silence five days ago with a video where he misused the word parasocial. Zarras has since released couch guy merch and gone on Barstool Sports’ Tea with Publyssity podcast. On Publyssity Zarras said “I posted it thinking it would get like 2,000 views.”

“It is crazy that so many people have something to say about it and are so invested,” she continued. She used her time on the podcast to defend her relationship with couch guy. She explained that couch guy was in his room five minutes before she arrived and had to be lured out by his roommate. She also clarified that the hair tie on his wrist is actually a magnetic bracelet she got him for Valentine’s day and that the girl next to him has her own boyfriend.

I hope that this is the last week of couch guy TikTok because I can’t take seeing the same 10 second video one more time. Couch guy spiraled out of control and goes to show that on the internet, people feel like they can comment about your life just because you posted a 10-second video. My favorite TikTok in the couch guy cinematic universe was posted by @josh1morris two days ago and it shows two men aggressively yelling about couch guy. It captures the absurdity of the whole thing.