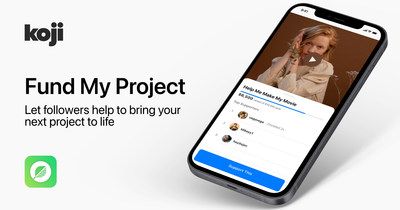 SAN DIEGO, March 31, 2022 /PRNewswire/ — Koji, the world’s most powerful Link in Bio platform and the leading app store for social media, today announced the launch of Fund My Project, a new app that gives creators the ability to crowdfund projects and other efforts directly from their Link in Bio.

Fund My Project simplifies the process of crowdfunding and makes it easier than ever for creators to promote their fundraiser. Creators simply set a monetary goal, give background information on their project, and then publish the app to their profile, where it is then instantly available from anywhere on the web and from any social media platform. Fans and followers can donate money to the cause directly from the creator’s Link in Bio. Creators can even set tiered rewards for their campaigns.

“Raising funds for new projects is a difficult task for content creators. Running a successful fundraiser requires diligent promotion and attention, and often involves sending potential supporters away from a creator’s content to other networks. Fund My Project makes it easy for creators of all types to create and promote fundraisers from within the context of their Link in Bio,” said Dmitry Shapiro, Koji CEO.

The new app is free to use and available today on the Koji App Store.