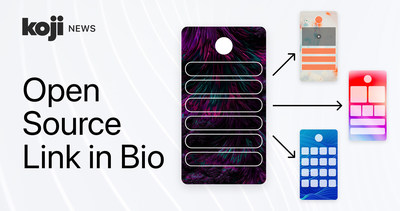 SAN DIEGO, March 8, 2022 /PRNewswire/ — Koji, the world’s most powerful Link in Bio platform and the leading app store for social media, today announced that it has released its industry-leading Link in Bio experience as open source. Developers can now extend, repurpose, and redistribute Koji’s Link in Bio, taking the Link in Bio experience beyond the standard “link list” format. Koji creators can easily replace their default Koji Link in Bio with any of these custom launchers, which can include things like radically different layouts, featured media, inline embeds, and more.

“By open sourcing our Link in Bio offering, Koji is allowing countless new Link in Bio experiences to be created by developers around the world, creating bespoke experiences that serve all different types of creators,” said Dmitry Shapiro, Koji CEO.

Backed by the power of Subtractive Development, Koji’s innovative developer ecosystem makes it easy for developers to create new experiences in minutes by seamlessly handling forking, provisioning, and deployment. Developers can then make these Link in Bio experiences available to creators for free or for a fee.

Developers can fork Koji’s Link in Bio, released under the permissive MIT License, from Koji’s developer scaffolds library. Creators can swap their Link in Bio or configure other types of redirects from the “Advanced” section of their Koji account settings.