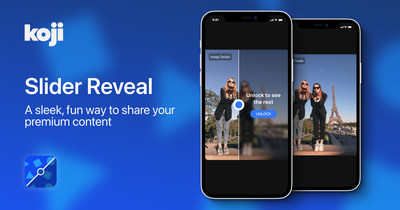 SAN DIEGO, May 3, 2022 /PRNewswire/ — Koji, the world’s most powerful Link in Bio platform and the leading app store for social media, today announced the launch of Slider Reveal, an app that lets creators set “paywalls” in photos that hide a specific part of an image until a follower pays to unlock, similar to the way paywalls are used in blogs and new sites.

From fashion to photography, Slider Reveal lets creators upload image files directly to the app from any of their devices and set a price for unlocking them. Followers who visit the creator’s Link in Bio can purchase the content directly from the app. They gain permanent access after purchase.

“Applying the concept of a ‘paywall’ to an image—where a piece of the image is available for everyone, but the full image must be unlocked by paying—has interesting applications for all types of content, including contests, humor, and other kinds of teasers. The power of the Koji platform allows us to explore these new use cases at a scale and speed that would not be possible otherwise,” said Sean Thielen, Koji co-founder.

The new app is free to use and available today on the Koji App Store.

Koji is the world’s most powerful Link in Bio platform. With hundreds of free apps created by Koji and its community of independent developers, the Koji Link in Bio gives leading Creators on TikTok, Instagram, Twitch, and other social media platforms new ways to engage audiences, connect with supporters, and monetize. Koji launched in March 2021 and has raised $36 million in venture capital.