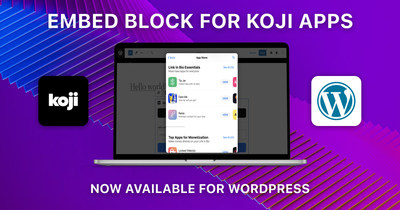 SAN DIEGO, March 10, 2022 /PRNewswire/ — Koji, the world’s most powerful Link in Bio platform and the leading app store for social media, today announced the launch of an official WordPress plugin, bringing the full power of the Koji App Store to over 400 million websites and blogs powered by WordPress.

“WordPress, along with the bloggers and creators it supports, is a cornerstone of the modern creator economy. This integration is a massive addition to the power and extensibility of WordPress, giving bloggers a frictionless and intuitive way to incorporate Koji mini apps in their content strategies,” said Dmitry Shapiro, Koji CEO.

The new plugin brings over 200 mini-apps to WordPress users, who can create and add these apps to WordPress posts, pages, and site elements via the Gutenberg block editor. Some examples of apps that can be added via the plugin include Tip Jars, Ask Me Anythings, and Video Guestbooks, as well as apps from other popular creator economy services like Laylo, Subtext, and Looped Live. The plugin can also be used with WordPress’s native Link in Bio pattern, giving creators an easy way to host a Link in Bio on their own website.

The Koji Block plugin is available today from the WordPress Plugin Directory and is free for all WordPress users.