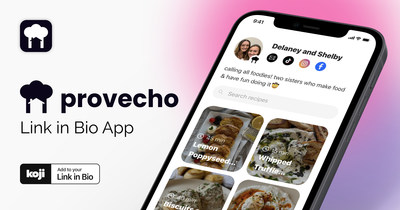 SAN FRANCISCO, March 2, 2022 /PRNewswire/ — Koji, the app store for the creator economy and the world’s most powerful Link in Bio platform, today announced the launch of a Provecho app in its app store. The app gives creators a powerful new way to create and share their favorite recipes in a mobile-friendly format directly from their Link in Bio.

“Provecho has made it easier than ever for food bloggers and influencers to share their recipes with the world, and we’re excited to give these creators the tools to surface content directly to their audiences,” said Dmitry Shapiro, Koji CEO.

The new app is free to use for all Koji users, and current Provecho creators can seamlessly link their Provecho accounts to their Koji Link in Bio. In the app, they can create new recipes, share their collection of recipes, and earn money from their sponsored products. Followers have easy, frictionless access to a creator’s entire collection of recipes, so they can start cooking with just a few taps.

The Provecho app is available today on the Koji App Store.

ABOUT KOJI
Koji is the world’s most powerful Link in Bio platform. With hundreds of free apps created by Koji and its community of independent developers, the Koji Link in Bio gives leading creators on TikTok, Instagram, YouTube, and other social media platforms new ways to engage audiences, connect with supporters, and monetize. Koji launched in March 2021 and has raised $36 million in venture capital.