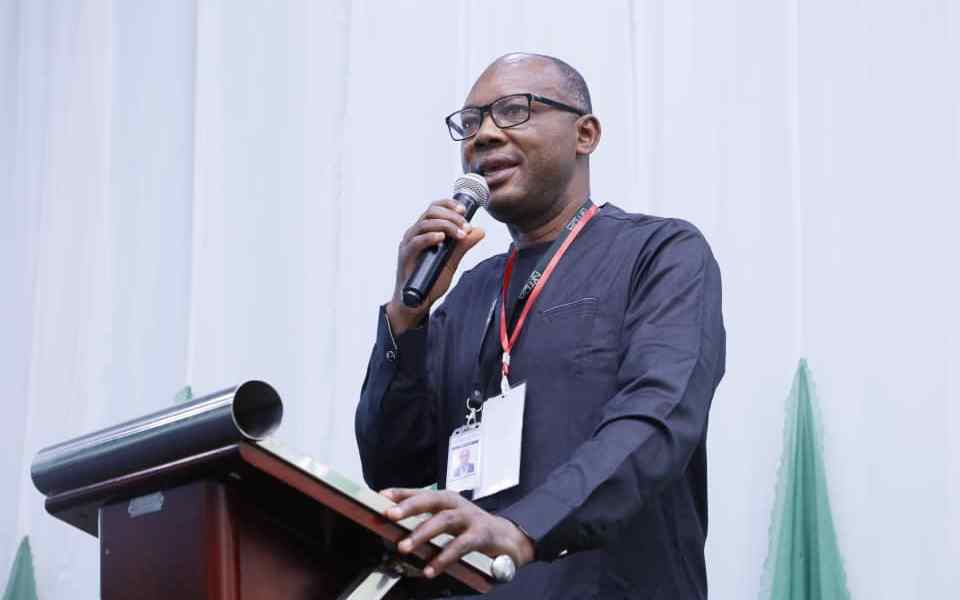 With the evolution of the digital industry to meet world class standards, the National Information Technology Development Agency (NITDA) has partnered with the Nigerian Export Promotion Council (NEPC) National Assembly (NASS) and Cyber Future Academy (CFA)to ensure that Nigeria, which holds the largest economy in Africa, with over 41.5 million SMEs, take advantage of the paradigm shift in the technological advancement of the nation’s development.

Kashifu Inuwa, director general of NITDA, CCIE while giving a keynote address at the Nigeria ICT Week, critically highlighted the Nation’s roadmap to a digital transformation towards achieving a National Social and Economic development.

The event, an initiative of NITDA, NEPC, NASS and CFA, which was held at the NAF Conference Centre, Abuja, had the sector’s key players in attendance to share ideas on how to create viable and comfortable environment for indigenous startups to thrive.

Inuwa who was represented by the Agency’s Ag.Director of Corporate Planning and Strategy Department, Dr Aristotle Onumo, stated that the Agency has made a strategic decision in joining the global trend and described the event as a platform for sharing the nation’s digital transformation journey.

“This event very much aligns with our mandate at NITDA, which is to develop and transform the Digital Economy sector of this great nation by setting up the necessary regulatory and governance framework that will stimulate the growth of the Digital Economy ecosystem”, Inuwa noted.

Buttressing his point further, the DG highlighted Agency’s support for indigenous startups which have contributed largely to the $4 billion generated by the continent’s tech startups in 2021 alone and have caught global attention.

“While we recognise the ocean boiling strategy through which the digital ecosystem has evolved over time, the Agency has been in the forefront of catalysing a new approach towards supporting the emergence of a viable digital ecosystem”, he averred.

Speaking on the Agency’s unprecedented achievements, Inuwa mentioned that the NITDA Strategic Roadmap and Action Plan 2021-2024 (SRAP) has offered a veritable compass for navigating the Nation’s volatile, uncertain and dynamic digital industry.

He emphatically stated that the implementation of the SRAP anchored on partnership and stakeholder collaboration, which encompasses public, private, indigenous and international, has reinvigorated the entire digital ecosystem.

Disclosing some of the Agency’s interventions, the NITDA boss stated that six startups have been supported to secure a grant of N300 million and entrepreneurial capacities have been built for youths through effective collaborations with NEPC and Mass Challenge respectively just to mention a few.

While giving assurances of growing the Nation’s digital tech ecosystem, Inuwa stated that the Agency is committed to making Nigeria a digital talent hub for Africa by leveraging on the various community-based programmes and other strategic initiatives designed to harness raw digital talents and transforming them to productive digital skills.

“As we prepare to enter the final decade of the 2030 Sustainable Development Agenda, it is imperative that we give priority to embracing the technological innovations of the Fourth Industrial Revolution to address our most pressing developmental challenges”, he concluded.

During his earlier welcome address, the Deputy Chairman, House of Representatives Committee on ICT & Digital Economy, Hon. Solomon Adaelu mentioned that power is a major restricting factor to growth in the country and urged participants to come up with solutions leveraging on the distributed ledger that can provide a transparent, efficient and secure power factor.

“At the legislative level, we will give support to many of these ideas and programmes as they come and I want to encourage all the agencies that are here to continue to partner with these programmes”, he urged.

Other key players at the event included the MD/CEO Galaxy Backbone who was represented by the Organisation’s Group Head, Regional Offices, Mr Abdulmaliq Suleiman, the Executive Assistant to the Governor of Delta State and coordinator of UNIDO centre, Mrs Shimite Bello, as well as the Ag. Coordinator, Office for Nigerian Digital Innovation (ONDI), Mr Yakubu Musa among others.