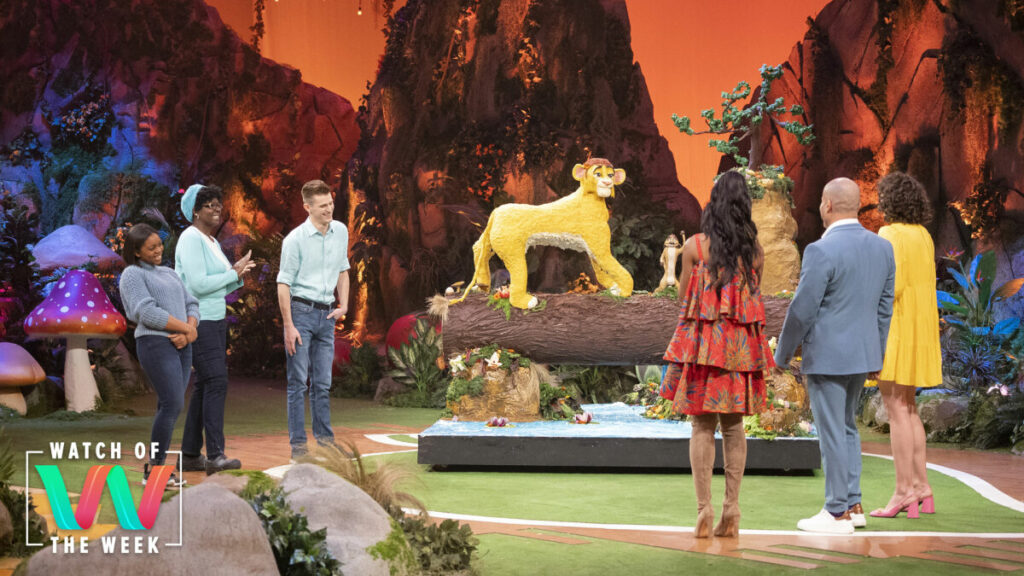 Foodtastic toes a fine line between charming and cheesy.

The goofy, low-stakes food competition could have easily veered into a land of sharp cheddar with its quirky “tell a Disney-branded story, but with food” premise. But it works, thanks to a mix of a charming host, stunning “foodscapes,” and plentiful nods to everything under the Disney-owned sun.

Host and executive producer Keke Palmer is the show’s relentlessly positive heartbeat. She introduces every singularly themed episode with a fictional framing device that sets up the basic plot that each competitor is meant to draw inspiration from as they design their custom creation.

In the series’ opening episode, for example, Palmer plays a physicist lab worker who, during a lunchtime nap, dreams up a scenario where she’s the superhero “Micro-Girl” and needs help from Ant-Man and the Wasp to fend off Yellowjacket and Ghost. In a later episode, Palmer plays a Star Wars mechanic for a Rebel Alliance that’s desperately in need of some new ships to take on the Imperial threat.

The show doesn’t feature too many celeb guests, and it doesn’t spend more than a few minutes establishing a narrative framework for any given episode’s theme. But the story setup provides a vital creative prompt for the three rotating groups of competing artists: Make a foodscape around this idea.

It works thanks to a mix of charming host, stunning ‘foodscapes,’ and plentiful nods to everything under the Disney-owned sun.

Those foodscapes are the undeniable stars of Foodtastic. This isn’t so much a cooking competition as it is a creative one. Each group of three artists is made up of established players in the niche-but-diverse field of food-based art. There’s a world champion ice sculptor, the founder of a Portland-based cake decorating school, and a famous St. Louis pastry chef. Everyone who’s competing is already accomplished in some way or another.

The bulk of any given episode chronicles the creation process from conception to execution. All teams learn the episode’s prompt right at the start, and they then have a day’s worth of time — tracked as the sun crosses the sky on a floor-to-ceiling screen featuring a theme-specific landscape view — to come up with an idea and bring it to life.

This is where Foodtastic‘s real thrills come from. It’s astonishing to see familiar characters like Black Panther, Simba, and Kermit the Frog emerge from run-of-the-mill kitchen staples. There’s plenty of the fondant, isomalt, and other supplies that food artists often use to ply their creations. But the bulk of each creation is just standard food being used in creative ways.

During a Muppets-themed episode in which Gonzo needs help getting a holiday party together for his chicken friend Camilla, chunks of gingerbread and buttercream icing slowly spring to life as the cobblestone brick of an old-timey fireplace. Another foodscape creation from that same episode features a Christmas “crudi-tree” built out of broccoli, kale, and Romanesco, with mealworms and popcorn sculpted into ornaments, and an ice sculpture of Camilla as the tree-topper.

None of the finished creations are really edible, or necessarily meant to be eaten. The two judges, Flour Shop owner Amirah Kassem and City Cakes owner Benny Rivera, focus on each entry’s creative and technical execution, respectively. They’re art-minded judges who are there to rate artistic creations.

The result is a show that has the energy and inherent messiness of a cooking competition, but always with the goal of producing a result that’s visually appealing rather than appetizing. If your big frustration with cooking shows is that you can never actually eat the delicious creations you see on TV — it’s my eternal complaint about the genre — know it’s not an issue here. I don’t want to eat these foodscapes; I just want to gawk at them.

The competition is also inherently low-stakes because of the prize in each episode: A Foodtastic pin for every member of the winning team. Disney pin trading and collecting is a very big deal for some people, but absent the lure of a cash prize, the Foodtastic competitors all keep things friendly and easygoing. That’s not to say there’s no drama when one project or another isn’t coming together as it should. But there’s no “loser” getting thrown off after creations are judged, and there isn’t a potentially life-changing opportunity for the winners. So everyone’s just here having fun.

Make no mistake: In most every episode, you get to see some truly mind-boggling food-based art pieces. Everyone is serious about their work and laser-focused on making the coolest-looking thing that they can. But it’s all very light and relatively devoid of tension. Fraught moments work more to demonstrate how even the most talented artist can struggle to turn their dreams into something tangible.

In other words, this is the perfect piece of entertaining for a little end-of-year unwind. It helps to be a fan of Disney and Disney-owned things, since they provide the creative fuel for every episode. But the light-hearted fun and stunning artisanship on display in each creation, coupled with Palmer’s goofy but forever-game antics, make Foodtastic an ideal holiday season binge.

Foodtastic comes to Disney+ on Dec. 15.