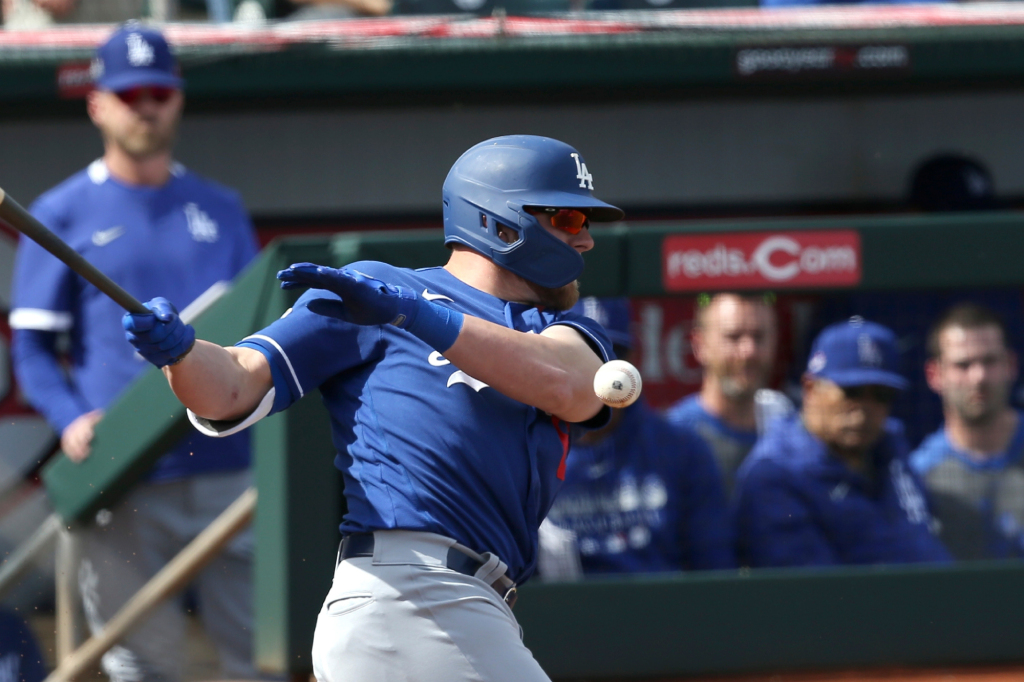 LOS ANGELES ― Outfielder Luke Raley spent the 2020 season at the Dodgers’ alternate site, far from the spotlight as the Dodgers marched toward a long-awaited championship. He could only bask in the glory as a championship banner was raised, and World Series rings were distributed, prior to Friday’s home opener against the Washington Nationals.

Yet Raley might have been more emotional than any of his 25 teammates as the game drew near. Just before the ring ceremony, Raley was informed he would take Cody Bellinger’s place on the active roster. He made his major league debut that afternoon and grounded out in his only at-bat.

For Raley, it was a dream come true.

“I was definitely nervous because of excitement, I guess,” he said. “It’s something I’ve dreamed about since I was growing up playing baseball and to finally make those dreams a reality is very surreal.”

Raley is the 11th player drafted by the Dodgers in 2016 to reach the major leagues, joining Gavin Lux, Will Smith, Dustin May, Tony Gonsolin, Mitch White, Zach McKinstry, Andre Scrubb, Dean Kremer, Devin Smeltzer and Jordan Sheffield. The journey didn’t take long, relatively speaking, but Raley’s path to the big leagues was not a straight line.

The Dodgers traded Raley, Smeltzer and Logan Forsythe to the Twins in July 2018 for Brian Dozier. Raley was in Double-A at the time. He said he was “devastated” by the trade.

In Feb. 2020, Raley’s journey came full circle when he and Brusdar Graterol were traded to the Dodgers for Kenta Maeda. He joined the Dodgers’ major league club in spring training in 2020 and 2021. Otherwise, between the pandemic and an ankle injury ― Raley dislocated the peroneal tendon in his left ankle in May 2019 and missed four months ― Raley hasn’t played much baseball the last two seasons. Including Friday, he’s only appeared in 66 regular-season games since he was traded to the Twins.

Raley’s patience ultimately paid off. He shagged fly balls, lifted weights, and was in the Dodger Stadium locker room Friday when he learned he was being added to the roster. The first phone call he made was to his mother, Beth.

“We have a really, really good relationship,” Raley said. “My mom has helped me every step of the way. She had to be my first call.”

Outfielder Mookie Betts missed his third straight game with back stiffness. He was able to swing a bat Friday, Manager Dave Roberts said, and isn’t expected to go on the injured list.

Roberts said pitcher Tony Gonsolin, who is on the 10-day injured list with right shoulder inflammation, might try to throw a bullpen session Sunday.

The Dodgers claimed pitcher Ashton Goudeau from the San Francisco Giants. The 28-year-old right-hander made his major league debut with the Rockies in 2020 and appeared in four games, allowing seven runs in 8 1/3 innings. The Giants originally claimed Goudeau off waivers from the Baltimore Orioles on March 18. … The starting pitching assignments for the Dodgers’ three-game series against the Rockies beginning Monday have not been determined, Roberts said. … A video montage celebrating the life of Tommy Lasorda, who passed away in December, played on the video boards prior to the game. Audio of Lasorda singing “My Way” provided the soundtrack. … Several current Dodger players also shared their memories of Lasorda in a video tribute.