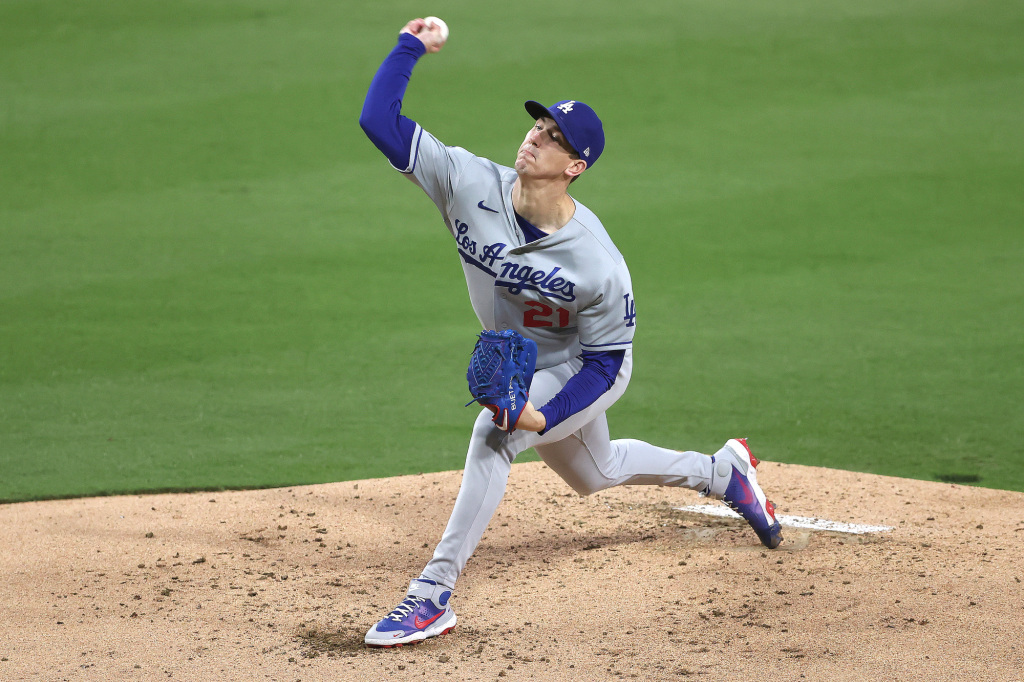 SAN DIEGO — The Dodgers have won each of Walker Buehler’s three starts so far and only Dustin May (1.78) has a lower ERA on the Dodgers’ staff than Buehler’s 2.00 in more innings.

But something has been missing from Buehler’s game this season.

“I’d like to start striking some guys out,” Buehler said, putting his finger on a surprising element missing from his early-season numbers.

Buehler has gone six innings in each of his first three starts but has struck out just 12 in those 18 innings, a 6.0 K per nine innings rate well below his previous career rate (10.3 per nine innings).

The Statcast numbers show Buehler is not just giving up more contact than he ever has, he is giving up harder contact more frequently. Through his start Friday, hitters have an average exit velocity of 91.6 mph against Buehler. They are putting the barrel on the ball 10.5% of the time – a big jump from his career rate of 4.8% – and making what is considered hard contact (an exit velocity of at least 95 mph) at the highest rate of his career.

“It just kind of is what it is at this point,” Buehler said of those unsatisfying internal numbers from his first three starts. “Obviously the velocity the first couple outings was down. I think it was a little bit up last night, which is nice. I think we’re always kind of working through some mechanical things. I don’t think anybody’s finished all the time.

“So I’m working on a few things, trying to get the ball to jump out of my hand a little bit better. I think it was last night so we’ll keep working with that stuff. The goal is to not let them score and so far I’m pretty pleased with that part of it. Now it’s kind of the other stuff, like you said. We’ll figure it out.”

The Dodgers recalled left-hander Alex Vesia from the alternate training site and optioned outfielder Matt Beaty there before Saturday’s game.

After using six relievers in Friday’s 12-inning win, the Dodgers’ bullpen “was used, but I wouldn’t say depleted,” Dodgers manager Dave Roberts said Saturday. Roberts did acknowledge that David Price, who pitched on consecutive days for only the third time in his 13-year career, and Kenley Jansen, who threw 26 pitches in 1 1/3 innings Friday, were not available Saturday.

The addition of Vesia, who was acquired from the Miami Marlins in a trade for right-hander Dylan Floro in February, gives the Dodgers 14 pitchers on their active roster for Saturday’s game.

Right-hander Brusdar Graterol was not activated Saturday, although Roberts acknowledged he had joined the team in San Diego. Graterol could “potentially” be activated Sunday, Roberts said.

Graterol arrived in spring training behind in his throwing program and opened the season on the Injured List for unspecified reasons.

Meanwhile, Gavin Lux’s injured right wrist had improved enough that he was “swinging the bat, I would say 70 percent.”

“So that’s improvement and we’ll just see kind of where he’s at tomorrow,” Roberts said.