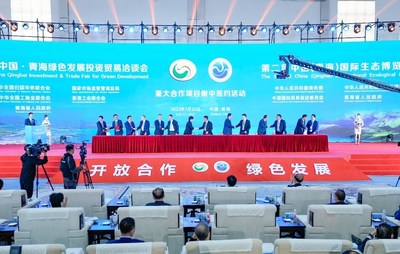 A total of 145 projects with an investment of 104.5 billion yuan ($15.47 billion) were inked at the 23rd Qinghai China Investment and Trade Fair for Green Development and the second China (Qinghai) International Ecological Expo held in Xining, capital of Northwest China’s Qinghai province, recently.

Themed on “opening-up, cooperation and green development”, the event was held both online and offline on July 22-24, and demonstrated Qinghai’s achievements in sectors including ecological protection, technological innovation and industrial upgrading.

This year, the event boasted a total of 40,000 square meters of exhibition space. It held a series of activities such as forums and project promotions, attracting the participation of officials and trading groups, and more than 730 businesses and investors, according to the organizer.

“Qinghai province is a powerhouse of ecology and clean energy, which is abundant in resources such as wind, solar energy, water power and minerals,” said Wang Chuanfu, chairman and president of BYD, a new energy vehicle manufacturer.

Qinghai’s installed capacity of new energy power generation ranks top among peers in the country and its volume of lithium resources accounted for 83 percent of the country’s total. The province is competitive in the development of the new energy industry, Wang said.

During the event, projects and investments regarding green development in Qinghai were highlighted.

Trinasolar, an intelligent photovoltaic energy solution provider, participated in the Qinghai event for the first time and has signed agreements with Qinghai authorities.

“The signing will help Qinghai to build itself into a hub featuring energy, industry and innovation,” a manager of Trinasolar said.

“We expect Qinghai will mobilize its resources including solar power to establish a zero-carbon energy system and thus contribute to Qinghai’s development in the clean energy industry,” the manager said.

Apart from trade communication, the event also focused on talent development. It made a total of 469 docking projects in terms of personnel, which will introduce 1,333 talents to Qinghai to support the province’s green growth.

The event was held to share Qinghai’s green development and opportunities, and to welcome more cooperation, organizers said.