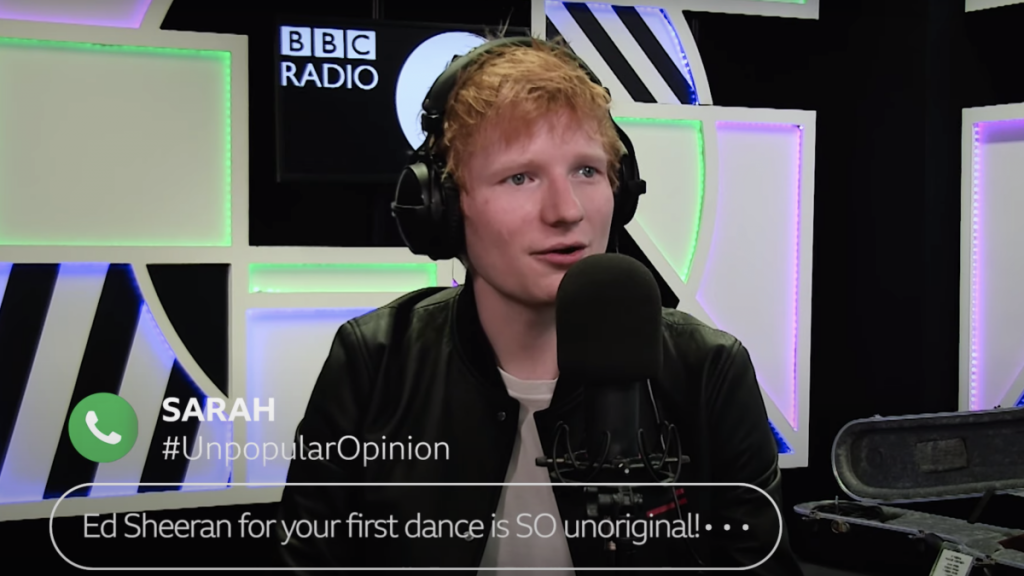 Ed Sheeran withstands your unpopular opinions, including those about his songs at weddings

Bad news for people who chose an Ed Sheeran song for the first dance at their wedding: someone called Sarah has an unpopular opinion about your decision.

The “Perfect” singer appeared on the BBC Radio 1 breakfast show on Friday and played a round of “Unpopular Opinion” with host Greg James, a show that encourages people to share something lightly controversial that they’ve been hesitant to say.

“You’re not original if your first dance at your wedding is an Ed Sheeran song,” declared Radio 1 listener Sarah.

Sheeran was unfazed by the comment. “I would say it’s become quite a done thing to have one of my tunes as a first dance, but it’s not always the ones you expect,” he said. Apparently some couples don’t always go for ‘Thinking Out Loud’ or ‘Perfect,'” he explained. “I had someone say ‘Happier’ once which is a breakup tune.”

Sarah thankfully redeemed herself by revealing that she is actually an Ed Sheeran fan. Nice save.

If you’re keen for more unpopular opinions where these came from, check out Stormzy giving life advice to a girl who dips McDonald’s fries in her milkshake, John Boyega and Daisy Ridley united in their thoughts on Buckingham Palace, Anna Kendrick and Justin Timberlake debating the benefits of coffee, and Jake Gyllenhaal being defensive of Sean Paul.