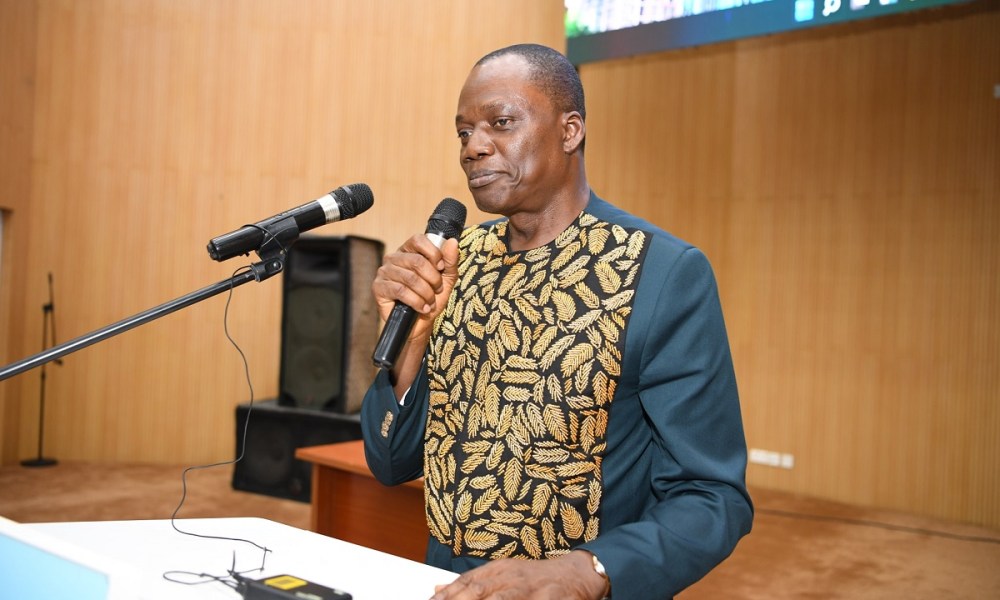 Encomiums as Durojaiye Okodu Bows out of NCC

A man without negative airs, yet he carries himself with the avuncular grace. His physical persona is marked by an exceptional gait that matches his physique.

Group photograph of well-wishers with the man of the hour

A man of naturally tall framing devoid of excessive fat that makes him able to move swiftly and magisterially. Importantly, Okodu’s humility and affable disposition easily endear him to everyone.

So, expectedly, last Friday, April 8, 2022, staff of NCC gathered at the imposing auditorium of the Commission’s Head Office Annex at Mbora District, Abuja, to honour Okodu, also known as “Baba Naira”, as he bowed out of NCC having reached the mandatory retirement age of 60 years and after 28 years of meritorious service.

Okudu began his career at the Commission in July 1994, as a cashier on transfer from the erstwhile Ministry of Communications, where he was head-hunted by a former director of the Commission, Felicia Onwuegbuchulam.

From then on, he had risen through the ranks, before eventually retiring as a Principal Manager, Projects, at NCC.

At the well-attended valedictory session; staff, friends, and well-wishers of Okudu, paid glowing tributes in torrents to the man who can aptly be described as man of the people.

Many were nostalgic and poignant while others were joyous, optimistic and tellingly introspective that Okodu would thrive in the next phase of his life.

In her remark, the NCC’s Director, Projects, Iyabode Solanke, who is Okodu’s last supervisor before his retirement, and who was Okodu’s head of Department while they both worked at the Commission’s Department of Financial Services, extolled the retiree for his dedication, as well as his dressing code and excellent work ethics, which she said are worthy of emulation.

Sholanke was represented by a Deputy Director in the department, Philip Eretan, who also attended the valedictory session in his own capacity as a friend of Okodu.

In the same vein, NCC’s Director, Zonal Operations, Amina Shehu, in her goodwill message, stated that in every interaction she had with Okodu, she had observed his stellar qualities, such as empathy, kindness, and gentleness. She added that he was also consistent in everything he did.

For Dr. Ikechukwu Adinde, NCC’s Director, Public Affairs, who also attended the valedictory party, anyone would be easily impressed by Okodu’s level of dedication to duty, which has become a mark of Okodu’s outings and career at the Commission.

Adinde said that Okodu was not merely ever-present whenever he was needed most, he also, every so often, displays emotional intelligence, and never lost his temper no matter the level of provocation.

“I am also impressed by Okodu’s social networking skills which had enabled him to remain connected with every staff,” Adinde emphasised.

The Director, Compliance Monitoring and Enforcement, at the Commission, Ephraim Nwokonneya, profoundly recalled the attributes exhibited by Okodu that are so quite distinctive when he had the opportunity of working with Okodu in the Financial Services Department of the Commission.

Nwokonneya said when he was assigned to the Department of Financial Services of the Commission as a Principal Manager, he had worked closely with Okodu, who characteristically was full of zeal and energy.

He said Okodu was very efficient and easily endeared himself to everyone. Nwokonneya encouraged him to look at retirement as a time of rejuvenation, reflection and prosperity.

A longtime companion and friend of Okodu, who was so evidently elated at Okodu’s befitting retirement, Olatokunbo Oyeleye, a Deputy Director at the New Media and Information Security Department of the Commission, said Okodu made her beginnings at the Commission a wonderful experience.

To Oyeleye, Okodu is more than a colleague, “he is a brother,” she said and proceeded to recall with gratitude when she joined the Commission as a fresh graduate, “Okodu and his wife accommodated me, taking me under their wings”.

This humane side of Okudu was underscored by Hafsat Lawal, Head, Consumer Policy Development and Monitoring, who asserted that Okudu was a mentor and a friend in need. “He is reliable and dependable, exuding high level of understanding in all matters and he would go out of his way to ensure everyone was comfortable,” Lawal said.

Former staff of the Commission were also not left out of the celebration. Among them, who attended and poured encomiums on Okodu, are Felicia Onwuegbuchulam, who retired from NCC as Director Consumer Affairs two years ago, and Abubakar Yakubu, a former Director at the Commission who voluntarily retired in 2019.

Onwuegbuchulam, a noted friend and confidant of Okodu who influenced Okodu to join the Commission 28 years ago, said she had no regrets in recommending Okudu to the Management of the Commission at the time. She said she was gratified that Okodu did not only had a chequered career at the Commission, he also excelled remarkably.

Yakubu, in a goodwill message he sent to the valedictory programme which was read on his behalf, praised Okodu for his dedication to the Commission.

He declared that Okodu was one of the few staff who would work long hours, and would even work at home. He added that Okodu’s commitment and relentlessness to delivering on his assigned duties were total and spectacular.

Okudu, who spoke at the end of the speeches, thanked the audience and all those who had honoured him with their presence and kind words.

Reflecting on the occasion with philosophical calmness and thanksgiving to God, Okodu said there had to be an end to every beginning but he thanked God for the privilege to witness his retirement day alive.

While expressing delight over all the goodwill messages received, he enjoined the younger staff who would be taking over the baton, to be hardworking.

He also advised that Commission can only thrive if staff remain hardworking in a consistent manner, and are dedicated and loyal to the Commission.

Other contributors at the event included Ajoke Atte, Head, Procurement; Solomon Igbayue, Assistant Director, Policy Competition and Economic Analysis; Emeka Nnama, Senior Manager, Zonal Operations; and Anthony Bassey, Senior Manager, Administration, all staff of the Commission who extolled Okodu’s distinctive virtues and dedication to the aspirations of the Commission. They all wished Okodu a life of grace and bliss in retirement.