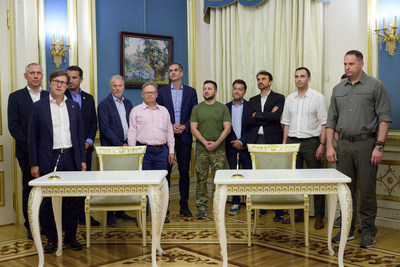 KIYV, Ukraine, Aug. 20, 2022 /PRNewswire/ — Mayors from European cities travelled to Kyiv on Friday 19 August to sign a political agreement to support the sustainable rebuilding of Ukrainian cities. The agreement outlines plans to match rebuilding needs in Ukraine with capabilities of other European cities. The pact is backed by the city network, Eurocities, and signed by Ukraine’s Congress of Local and Regional Authorities on behalf of Ukrainian President Volodymyr Zelenskyy, and all local and regional authorities in Ukraine.

“We, mayors and leaders of European and Ukrainian cities, condemn the Russian war in Ukraine and call for an immediate withdrawal of Russian forces and the restoration of peace. We are committed to combining our efforts to prepare and deliver the rapid and sustainable reconstruction of Ukrainian cities destroyed by Russian attacks since 24 February 2022.”

The European mayors spearhead the initiative of city network, Eurocities, which represents over 200 cities across Europe, and will itself ensure wide support to contribute to the rebuilding plan.  The mayors personally introduced the plan to President Zelenskyy and to their Kyiv counterpart, Vitali Klitschko, during a meeting in the Ukrainian capital on Friday.

Dario Nardella, who led the mission as President of Eurocities, as well as Mayor of Florence, said: “We want to offer hope, support, and solidarity to the Ukrainian people for a peaceful and democratic future. We, mayors, are the political figures closest to people, and it’s this closeness and solidarity that we brought with us from people all over Europe when we met with President Zelenskyy and our fellow Ukrainian mayors.”

“When we speak about help and support – humanitarian, military, political – it is important not to forget about assistance in recovery of our cities and towns,” President Zelenskyy said after meeting the local leaders. “It is important that recovery should start not after the war but now. It is necessary to provide humanitarian activities that will help to get back to normal life for people in Ukraine,” Zelenskyy added.

A joint taskforce comprising political representatives from Eurocities and Ukraine’s Congress of Local and Regional Authorities under the President of Ukraine will meet regularly to oversee the development and implementation of this collaboration initiative.

In addition, while Eurocities will engage its network of over 200 cities, Ukraine’s Congress of Local and Regional Authorities will share details of the relevant critical reconstruction projects in Ukrainian cities that were destroyed in the Russian war. The Congress will also coordinate rebuilding efforts to avoid overlaps.

“Your visit is important for us. It is a sign of support for the Ukrainian people and residents of Kyiv, as well as evidence of our unity. Unity of Ukrainians and Europeans. Unity in the struggle for freedom and democratic values. Because it is that Ukraine is fighting for today in the brutal war which the Russian barbarians brought to our land,” emphasised the mayor of Kyiv.

André Sobczak, Secretary General of Eurocities, who also took part in the mission, said: “Our member cities have a long history of cooperating across borders, including with Kharkiv, Kyiv, Lviv and Odesa, which are all members of Eurocities. There is a strong desire to pool our skills and resources as city builders and to share this expertise for the creation of sustainable and inclusive cities in Ukraine.”

Principles of the agreement

To ensure practicalities in the use of resources and expertise across borders, the mayors, represented on both sides, agreed to a set of leading principles of this collaboration to thus be: 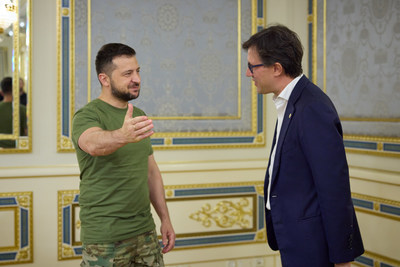