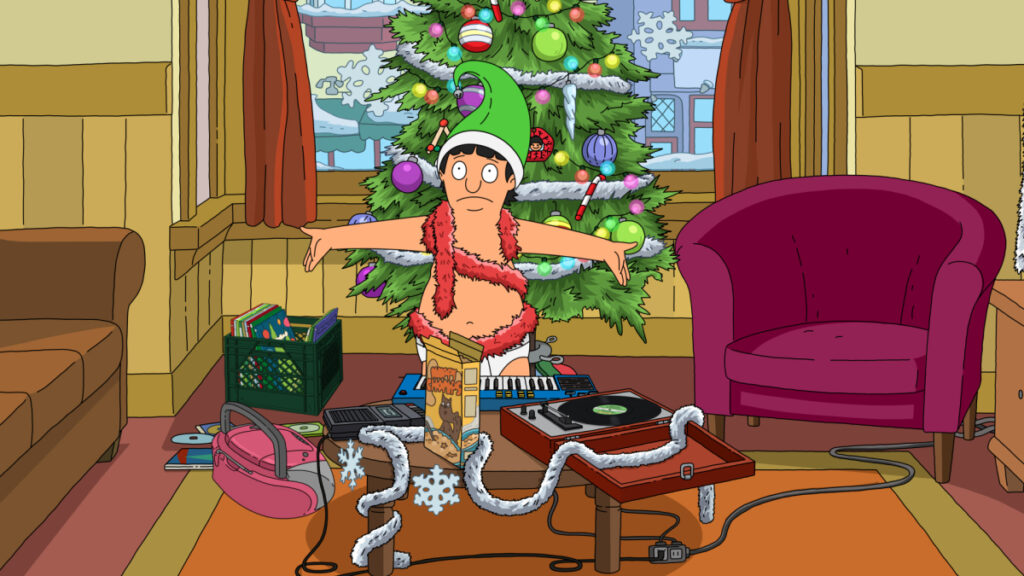 There’s just no Christmas like an Ocean Avenue Christmas.

Whether you’re celebrating with a binge of all your favorite holiday TV specials or just sneaking in a few festive episodes here and there, Bob’s Burgers shouldn’t be overlooked when making your Christmas queue selections. From a daring hunt for a stolen tree to an intimate portrait of a woman who is truly terrible at knitting, Bob’s Christmas episodes cover all sorts of Yuletide moods.

Bob’s Burgers’ 2021 holiday offering sees Gene heartbroken after an ill-advised sleepover with his favorite vinyl record “Percy McTinsel-Bud’s Tinsel Machine ” leads to it breaking. Similar to last year’s “Diarrhea of a Poopy Kid” — in which Gene has a stomach bug and can’t enjoy Thanksgiving dinner — this uplifting tale follows the Belchers’ efforts to cheer him up. Meanwhile, Teddy, Mort, and Mike join Linda and Bob in a super sweet Secret Santa. It’s the weakest Belcher celebration to date, but has plenty of warm and fuzzy moments worth snuggling into if you watch everything else on this list first.

In this relatively low-key affair, Linda and Bob spend the Christmas season scrambling to knit scarves for the kids as part of a nice gesture turned needlessly stressful. Meanwhile, Gene, Tina, and Louise (with the help of Darryl, Rudy, and Rudy’s cousin Mandy) face off with Logan in a snowball fight for control of the best sledding hill in town. There isn’t a whole lot of spectacle to this episode, but it offers a solid lesson in never giving up. Oh, and making sure you’re friends with the softball team. Always be friends with the softball team.

When Linda takes a part-time job sorting mail at the post office, a misplaced package gets her tangled in a last-minute quest (read: felony) to deliver a Christmas present. Back at the Belcher house, Bob does his best to avoid getting in the middle of a dispute involving Aunt Gayle, Linda’s parents, and an ottoman. Similar to Season 3’s “Lindapendent Woman” and Season 5’s “Eat, Spray, Linda,” this Linda-centric episode is great for lovers of her tremendous can-do spirit.

After Linda’s overeagerness sticks the Belchers with a dried-out out tree on Christmas Eve (note to self: the day after Halloween is too early for tree selection), the entire family heads out in search of a new one. What follows is a surprisingly tense adventure, featuring an 18 wheeler shaped like a candy cane and a road-side stop to get a warm apple treat. Plus, there’s a fun kicker involving Teddy, Santa, and a refrigerator that’s more delightful every time you watch it.

In this 2020 episode, the Belchers get a gig catering the Glencrest Yacht Club’s holiday boat parade — but Bob grows suspicious when he can’t figure out who recommended them for the job. A surprisingly heartwarming chapter in the never-ending saga that is Bob and Jimmy Pesto’s bizarre frenemy-ship, “Yachty or Nice” offers a cheerful glimpse into a productive holiday season for the family of restauranteurs, which spectacularly also includes Linda yet again trying to meet the mayor.

“Father of the Bob,” fittingly set almost entirely at Bob’s dad’s restaurant, could have been an underwhelming affair. But leave it to the Belchers to make this relatively simple story of a seasonal squabble between father and son into a full-on production that includes both line dancing and Gene covered in baked beans. This is a great one if you’re in the mood for forgiveness, or box steps.

In Season 6’s “Nice-Capades,” Louise makes a terrible mistake by angering a mall Santa — who, she learns, works with a network of other mall Santas to report naughty kids to the real Santa. To make up for the “misunderstanding” and secure their gifts ahead of Christmas, the kids, with the help of Calvin and Felix Fischoeder, plan an elaborate musical to perform at the mall. Ridiculous, with some weirdly sexy ice-skating, the result is an instant Belcher classic.

Few things delight this entertainment reporter more than the early seasons of Bob’s Burgers. They’re just so weird. In this first ever Bob’s Christmas, Season 3’s “God Rest Ye Merry Gentle-Mannequins,” Bob inherits a storage unit — and a dude named Chet living inside of it. So, Chet moves in with the Belcher until Christmas, and chaos ensues. It’s one of the stranger plot lines on this list, but ends with a nice excuse to meet good ol’ Sal at the Spanks A Lot sex shop.

2. Season 7, episode 7: “The Last Gingerbread House on the Left”

Similar to Season 3’s “An Indecent Thanksgiving Proposal,” Bob spends this Christmas episode tangled in a Fischoeder plot involving gingerbread houses, firearms, and a bedpan. Linda, Teddy, and the kids, meanwhile, set out Christmas caroling — even at the scariest house in the neighborhood. It’s a super fun episode with an adorable ending worth watching twice.

In this two-part Bob’s Burgers Christmas extravaganza, Ocean Avenue folklore of a terrible creature known as The Bleaken combines with a hunt for Linda’s missing Christmas tree to spectacular effect. “The Bleakening” has multiple musical numbers, spectacular animated sequences, a Game of Thrones reference, and a guest appearance by Todrick Hall. You’ll love it. Merry Christmas!

For other festivities, check out our rankings of Bob’s Halloween and Thanksgiving episodes.