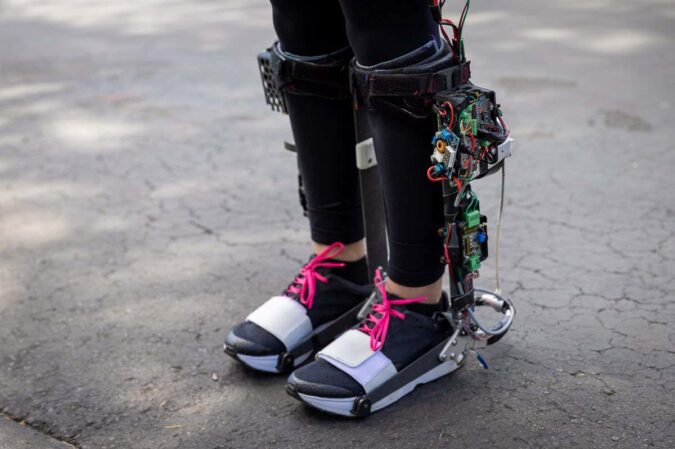 An exoskeleton boot that lets you walk faster while using less energy could help older people or those with disabilities move around.Existing exoskeletons have failed to make the step into the real world because they need to be fine-tuned to a person’s gait over long periods. Without such personalisation, the hardware may provide only a minimal boost or even make walking harder.

“Despite all the things you see in the comic books and superhero movies, exoskeletons are really, really tricky,” says Steve Collins at Stanford University in California.

Collins and his colleagues have previously found tailoring an exoskeleton to an individual to be a lengthy task. The wearer had to visit the lab for five consecutive days and walk on a treadmill for 2 hours each day while wearing an uncomfortable respirator and sensors so that the content of the air they breathed in and out, and therefore their metabolic effort, could be measured.

Now, the researchers have come up with a computer model that absorbs the data from 3600 of their previous laboratory tests to learn how to approximate the metabolic effort based on physical data from the exoskeleton’s sensors alone. This means their exoskeleton boot can hit the ground running and the wearer can fine-tune the hardware while walking outside normally, rather than on a treadmill in a lab.

This method got within 5 per cent of the efficiency of the laboratory approach, but did it in a quarter of the time and without the need for expensive specialist respirators. Collins says the research could finally make exoskeletons practical and affordable.

The exoskeleton boots used in the trials were built from aluminium and carbon fibre and have a motor to pull on a lever that helps to rotate the ankle and push off harder with the toes. The team found that the device, when trained outside a lab, led to a 9 per cent increase in walking speed and a 17 per cent reduction in energy cost during natural walking compared with normal shoes. The researchers calculate that these energy savings are roughly equivalent to removing a 9.2-kilogram backpack.

“When I got started in all this 12 years ago, as a new professor, nobody had ever designed a device of any kind that made walking easier for anybody,” says Collins. “Everything we tried made walking harder. But I think we’re actually finally there. I feel like in the next few years, we’re going to see some products that actually improve people’s lives based on this research.”

Collins says that not only is the approximation approach quicker and cheaper, but it will also constantly update, unlike lab testing, which would provide a slightly more accurate solution that may become less appropriate over time.

“These things can be constantly optimising to your needs as you walk around,” he says. “Your body is slowly changing – muscles remodel, your habits change, you gain or lose weight – and so the optimal assistance will change slowly over time too.”