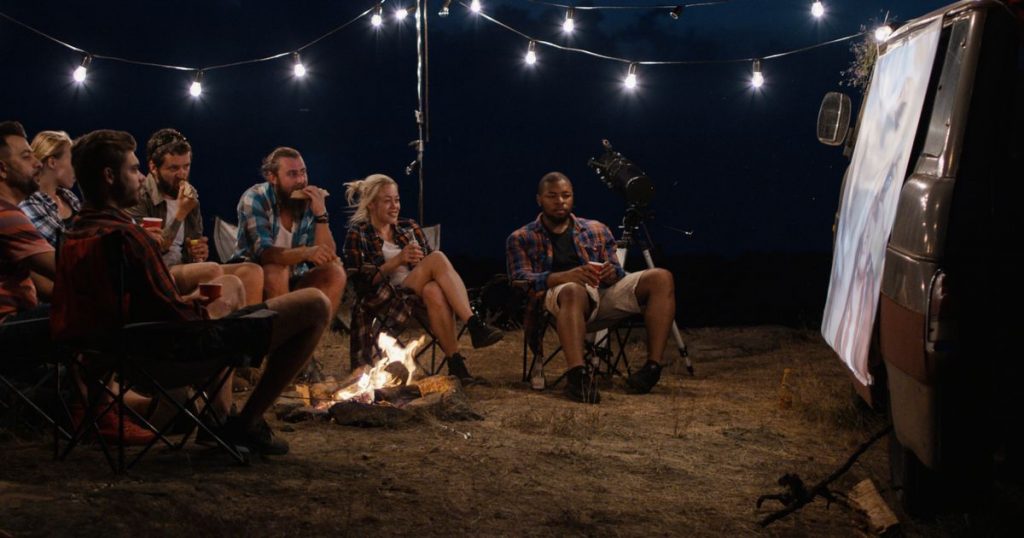 For a movie night under the stars, an outdoor projector is your best bet

This summer, you’ll probably want to spend as much time outside as possible — whether that’s spent gaming, catching up on shows, or on watching a movie with the family. Check out our top projector picks before Prime Day, so you can take the watch party outside this summer.

All products featured here are independently selected by our editors and writers.If you buy something through links on our site, Mashable may earn an affiliate commission.
By Chloe Bryan2021-06-16 13:38:17 UTC

Gathering the family to watch a film everyone agrees on (Cats?) under the stars: Now that’s a summer night. To turn your yard into a home theater, though, you’ll need a projector — one that works just as well outside as it does in.

While the vast majority of projectors aren’t marketed exclusively for outdoor use, there are plenty of options that will suit backyards, rooftops, and porches with no issues. You’ll even be able to take super portable projectors on camping trips.

You’ll just need to keep a few attributes in mind, including brightness, portability, throw distance, and sound. Whatever the particular needs of your outdoor space, there’s likely a projector on this list for you.

What features to look for

It’s pretty easy to control the light level indoors: If you want it to be darker, turn the lights off and close the blinds. Outdoors, brightness is largely out of your hands — all you can do is wait for the sun to set and hope there isn’t too much ambient light for your picture to handle.

Keep your yard’s brightness level in mind while choosing a projector. If you aren’t worried about ambient light — like you live in a rural area with very little light pollution, for example, or your backyard is far away from your neighbors — brightness may not be your biggest concern. If you anticipate environmental light getting in the way, though, go for one of the brighter options on the list. (Here, brightness is recorded in lumens.)

Choosing the right projector for your space’s size can be tricky, so we’ve tried our best to specify the locations in which our picks will work best. If you’d like to read further, there are several informative guides out there. Our favorite is and includes a useful throw distance calculator.

You can’t store a projector outside, of course, so we’ve made sure to feature relatively lightweight options that are easy to lug out to the backyard. Each of our picks weighs under 10 pounds; still, If you want to travel with your projector, you’ll probably want the lightest option possible.

What other supplies will I need?

The projector will do lots of the work for you, as well it should. But if you’re building an outdoor theater from scratch, there are a few other supplies you’ll need as well, including:

Here are our picks for the best outdoor projectors. Better start polling the fam about that movie. Or maybe everyone can just play Mario Kart.

This projector is a solid one-size-fits-all option for families who want to enjoy an outdoor theater without any fuss.

For outdoor viewing at home, this projector delivers the sound, picture, and features you need.

For outdoor viewing at home, this projector will likely give you the most bang for your buck. (A note: It’s frequently marked down close to $300 below its original list price.) With 2500 lumens of brightness, it’ll fare well against mild ambient light, and its 10-watt speakers will do just fine for casual use. It can also project a screen size of up to 300 inches
This projector isn’t Bluetooth compatible. It does, however, have two HDMI ports, so you’ll be able to hook up two devices at once.
Bonus: You’ll be able to watch 3D movies with the Epson 2100, provided you already have the other equipment necessary. You know what that means: It’s time to put on those fashionable glasses.

The Optoma HD146X is a bright, reliable option that’s ideal for console and PC gaming.

Want to play video games in your backyard? Consider the Optoma HD146X, which is bright enough to use in outdoor spaces where there’s some ambient light. Yes, this means a sunset Animal Crossing session could be in your future. It’s hard to imagine anything more pleasant than that.
The projector is equipped with a setting called Enhanced Gaming Mode, which cuts back on lags for an input response time of 16 milliseconds. (That means your actions will be reflected onscreen after 16 milliseconds.) There’s also Game Display Mode, which makes shadows and dark scenes easier to see.
The Optoma HD146X is not just for games, though. It’s also a really solid option for streaming movies and TV — especially medium-scale uses like backyard movie nights. You’ll be able to project onto screens up to 300 inches, though keep in mind you’ll need to do this from a distance of about 13-14 feet. So you’ll need some space, but it’ll pay off.

Don’t want to worry about plugging in? Here’s a portable option with some pretty impressive specs.

Reviewers love this projector’s portability, lightness, and ease of use.

Take this one to the rooftop movie night: You’ll get 2.5 hours of use on a single battery charge. (That’s not quite enough to make it through The Irishman, but maybe you don’t mind.) Plus it’s wireless, which means that as long as you have a good surface on which to project, it works pretty much anywhere. It also runs LG’s smart TV platform, which renders the projector a streaming device all on its own.
The LG PF50’s screen size maxes out at 100 inches, which is best for small to medium spaces. Its brightness isn’t the best on this list — you’ll certainly struggle to use it if there’s lots of ambient light — but what it lacks in lumens in makes up for in portability.
This projector does have built-in speakers, but they’re fairly weak. You’ll probably want to find external sound for this one.

The Anker Nebula II is ideal for camping, low-key travel, and casual nighttime use.

If you’re looking for a light, portable projector with good built-in speakers, the Nebula II is for you.
This is quite a unique projector. Not only does it have a set of built-in 8W speakers that are extremely good for its mini size, but it also runs Android TV, Google’s smart TV platform. This means setup — i.e., actually getting to the stuff you want to watch — should be a breeze. Additionally, it doubles as a smart speaker and voice assistant, so you really don’t have to worry about it taking up space in your house. (It also weighs less than two pounds, so maybe you weren’t worried anyway.)
Where the Nebula II struggles the most is brightness. At 200 lumens, it’s  best for use in dark environments where there’s little ambient light. Still, if you’re looking for something super portable that doesn’t require separate speakers and looks like a cute little soda can … here you go.
According to the company, the Nebula II can project a 100-foot image from about 10.5 feet away. That’s as big as it can get, though, so look elsewhere if you want an enormous projection.

If you want to keep costs low, the AAXA P2-A is a great (and very cute) option for the price.

This cute pico projector is an affordable, reliable option for beginners.
A “pico projector” refers to a tiny handheld projector; this one, fortunately, comes with a tripod included. At just over $200 (though it often goes on sale), it’s the most affordable projector on the list, but that doesn’t mean it can’t deliver at least some of the goods in its (literally) palm-sized package.
This projector is fully portable, claims to be able to hold a charge for about 2.5 hours, and can deliver 130 lumens of brightness. For the price that’s fine, but note that it’s the lowest brightness on this list. It’ll do best in very dark environments.
For casual nighttime use, though, the AAXA P2-A is an inarguably great value: It’s incredibly light, features an easy-to-use touchpad, and is Bluetooth compatible. It’s also a smart projector, and it runs Android 5.1. (Some reviewers have noted that the software can feel clunky to use.)
If you’ve got a small backyard or a porch that you want to watch movies on — but don’t want to shell out $600 — this pico projector is a good bet.
You might need some extra speakers, but you already knew that.

Despite being the priciest option on this list, this 4K (!) projector is still a great value for its features.

This 4K projector will replicate a home theater experience effectively — for a price.
Alright, so you’ve put the work in on your gorgeous backyard and you’re ready to splurge. The ViewSonic PX747-4K has the features you need to recreate the home theater experience at home — provided you have the space to accommodate it. According to the company, this projector can project a 100-inch screen from just under 10 feet away, so you’ll need a bit of yard to work with.
In terms of features, though, this option is hard to beat for the price. It’s super bright — 3500 lumens — and has an impressive set of 10W speakers, so you can get away with not purchasing a separate set. 4K fanatics will also be pleased to know this is a true 4K projector, and a surprisingly affordable one at that.
According to reviewers, the projector does tend to take a while to turn on and off — up to 15 seconds in some cases. A few folks also noticed some distracting noise from the fan, which may or may not be a concern for you depending on how much ambient noise you anticipate around your setup.
Despite these relatively small issues, though, the ViewSonic PX7474-4K appears to be well worth the price.