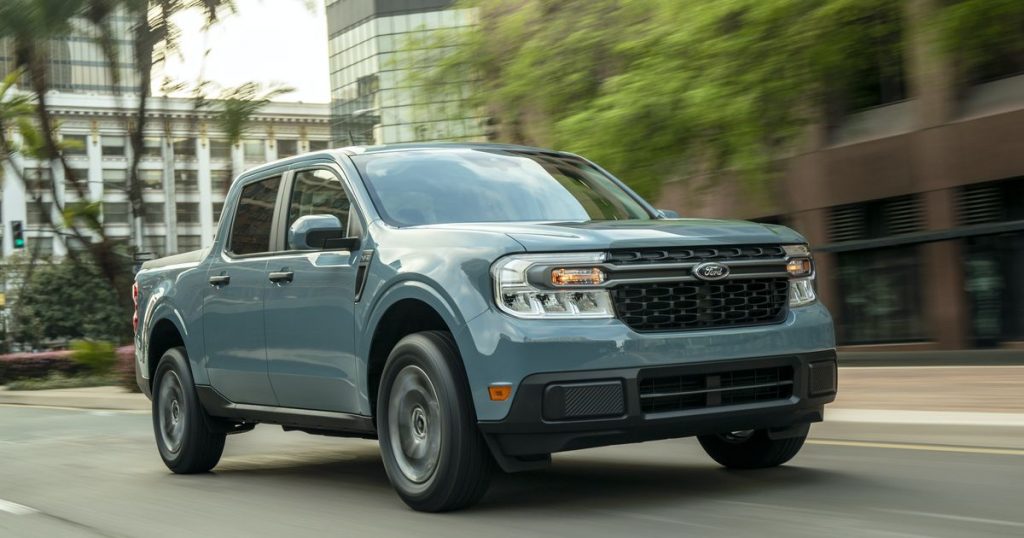 So it’s not the all-electric Ford F-150 Lightning, but Ford’s newest truck still has an electric boost.

The Ford Maverick was revealed Tuesday as a compact hybrid truck. It’ll get a combined 500 miles of range on a single tank of gas thanks to its hybrid engine. While city driving that equates to about 40 miles per gallon. It doesn’t have a plug-in battery, so it recharges while braking or when coasting downhill, just like the quintessential hybrid, the Toyota Prius.

As Ford execs kept repeating during a media presentation ahead of the reveal, the Maverick is “a truck for people who never knew they needed a truck.”

Inside, there’s an embedded modem for WiFi hotspots and both Android Auto and Apple CarPlay are available on the eight-inch touchscreen. There’s wireless charging for smartphones in the center divide.

The storage space in the car is purposeful with room for a large water bottle in the door. Underneath the backseats is even more storage, and the seats can fold to fit a bicycle inside the main compartment.

With a lower, more accessible bed and tight turning radius, the Maverick can blend into a more urban driving scene. But there are five different modes depending on where you’re driving and what you’re doing: normal, tow/haul, slippery, eco, and sport.

Behind the cabin there’s the customizable truck bed that’s 4.5 feet long (that’s a foot shorter than the F-150). It goes to six feet with the tail down. As one exec noted, you can fit a lot of mulch in the back for your gardening needs. The nooks and slots let you use the space as you want—for bicycles, surf boards, or slats of wood for a construction project.

The bed also has an outlet to plug in electronics and tools, and 10 tie-downs for strapping in equipment and creating storage space. A second plug is in the backseat.

So while most of the tech (and most advanced safety features, like braking assistance) comes standard, some of the more premium trims include extra storage on the side of the truck, bigger wheels, and bed lighting. There’s standard, XL, XLT, and Lariat, and Ford’s offering a limited first edition version with decals that say “First Edition” and a black painted moonroof.

Ford didn’t share prices for its higher-end versions at the debut. But the hybrid truck and its budget starting price will be available this fall.