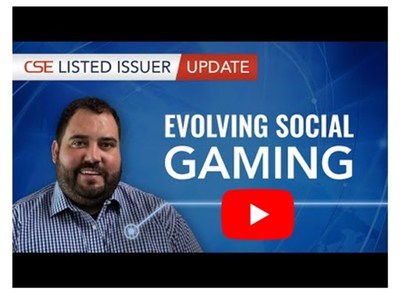 Jon Dwyer, Chairman and CEO of Gamelancer, spoke with the CSE’s Anil Mall about the Company’s differentiated approach to leveraging the fastest-growing gaming network on next-generation social media platforms to create opportunities for brands and partners to connect and engage with consumers in a unique and meaningful way through the creation of branded content campaigns. Gamelancer generates over one billion monthly video views across 22 owned and operated channels and has more than 27.5 million followers on TikTok, Instagram, and Snapchat, providing brand partners unparalleled access to the largest gaming-focused media inventory on the most relevant social media platforms.

Jon Dwyer speaks with the CSE to discuss the strength of the Gamelancer platform.

Dwyer states that through its first year of trading as a publicly-listed company, Gamelancer has achieved significant milestones that have set the Company up for an exciting future through 2022 and beyond.  Partnerships were formed with Shopify, Samsung Electronics, CAA Hockey, the NHLPA and NHL Alumni Association, as well as athletes from Toronto’s major professional sports teams, including Fred VanVleet and Chris Boucher of the Raptors, and John Tavares of the Maple Leafs; more partners will be announced as global brands seeking access to the Gen Z and Millennial audiences learn of Gamelancer’s unique value proposition and the Company’s ability to ensure delivery of results by virtue of owning its channels and networks.

In addition to outlining plans for increasing the Company’s presence in the United States through a U.S. uplisting and building on Gamelancer Gaming’s Los Angeles roots, Dwyer notes that FaZe Clan’s highly-anticipated IPO and $1 billion valuation could be a gamechanger for the entire industry.

About Gamelancer Gaming
Acquired by Wondr Gaming, Gamelancer Gaming Corp. is a growing mobile-focused social media network in gaming – generating over 1 billion monthly video views across its 22 owned and operated channels. With over 27,500,000 followers on TikTok, Instagram, and Snapchat, predominantly located in the US, Canada, the UK, and Australia, Gamelancer sells direct and programmatic media across its network to the world’s largest brands. With advanced user data analytics, we provide our audience curated content relevant to the GenZ & Millennial gaming community, which allows brands unparalleled access to the largest media inventory in gaming across TikTok, Instagram, and Snapchat. Gamelancer also monetizes across its variety of Snapchat Gaming channels with monthly recurring revenue in partnership with Snapchat.