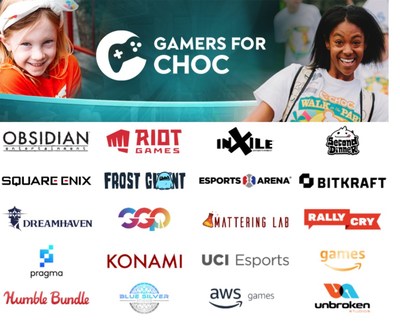 Supporters who raise $200 or more will enjoy Private Event on August 27, 2022 at Disney California Adventure® Park, Presented by Disneyland® Resort

ORANGE, Calif., Aug. 15, 2022 /PRNewswire/ — Gamers for CHOC, an initiative that rallies employees, players, and communities from local games-related studios, businesses, and groups, is back for its second year to support Children’s Hospital of Orange County. The program raised nearly $200,000 in 2021, contributing to health care programs, education, and research for southern California’s kids.

Gamers for CHOC invites members of the larger gaming community to get involved by donating on behalf of a participating team or signing up to join a team as a fundraiser on the CHOC Walk site. Top fundraisers across Gamers for CHOC teams can earn unique prizes and experiences from participating organizations. This year’s companies includes some of the most notable names in the gaming industry:

Individuals who raise $200 or more can also attend “CHOC Adventure in the Park,” where for one night only, Disney California Adventure® Park will come to life with exclusive experiences just for CHOC enthusiasts, including:

“We are thrilled to partner with Gamers for CHOC again this year,” said Zachariah L. Abrams, Assistant Vice President of Community Engagement at CHOC Children’s Foundation. “Last year’s effort was extremely successful and we are so thankful to the community of gamers who support CHOC and the kids who we help. We look forward to seeing which teams rise to the top this year.”

Gamers for CHOC will host a standalone hub on the CHOC Walk website that will aggregate information across all participating teams. It features a leaderboard to encourage friendly competition between companies and highlight the participating teams, how many members they have, and how much money they’ve raised. The hub will also feature a running total of how many dollars have been raised as a part of the overall initiative.

Sign-up information on Gamers for CHOC can be found HERE.