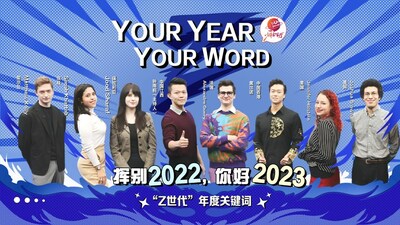 BEIJING , Dec. 30, 2022 /PRNewswire/ — The seventh episode of season two of the China Daily series Youth Power, titled “Your Year, Your Word”, was broadcast online on Dec 30.

For this episode young people from Bulgaria, China, Egypt, Ethiopia, Ireland, Israel, Russia, South Africa and the United States and other countries were invited to summarize the year and talk about their hopes for 2023, doing so choosing a word that they deem appropriate.

The guests also talked about their thoughts on word-of-the-year reports that research institutions and publishers issue at this time of the year. The session demonstrated Gen Zers’ understanding of themselves, their home country and the world.

Looking back over the year, Matthew Kelly, a Gen Zer from Ireland, nominated rewarding as his word of the year. Kelly, having studied at the Confucius Institute in his country, said the year was highly successful for him because he continued learning about China, its language and its culture, which he said was highly fulfilling.

“It’s such an amazing experience, and I think the biggest reward for me actually has been the connections that I’ve made here in China.”

Han Shuyuan, who is taking part in a visiting undergraduate program at Harvard University, chose adventure as her word of the year, saying that studying abroad has been an adventure for her in terms of both learning and seeing the world.

“I got to hear different perspectives and views on some global issues from students with diversified cultural background,” she said.

Sarah Khattab from Egypt said the word that best summarized the year for her was achievements, particularly referring to political successes. She cited President Xi Jinping’s speech at the 2022 China-Arab Summit on building close China-Arab relations and strengthening solidarity and coordination, which she said points the way for the development of China-Arab relations.

“I think this year is a year of achievements for all the Arab countries. And it’s also related to China because China helped Egypt in building a new city in the middle of the desert. Now there is an administrative capital city in Egypt.”

The word belief was the choice of Enoch Wong of the Hong Kong Special Autonomous Region.

“I think it’s a belief in the past that made us who we are today, and it’s a belief that we have now that which will make us what we will be in the future,” he said.

Wong said belief is the driving force behind a country’s progress. He cited the example of Beijing holding both the Summer Olympics in 2008 and the Winter Olympics in 2022, the only city to have hosted both versions of the Games. The event demonstrated to the world China’s strength and achievements, Huang said.

This year the 25th anniversary of Hong Kong’s return to China was celebrated, and Wong said he looks for forward to the region continuing to flourish.

In terms of China, the guests also expressed their thoughts, using individual words as a reference point.

Alexandre Guery from France said that for him the words prosperity and transition best summed up China in 2022. The country had not only continued to prosper but in times of transition had also managed to keep advancing toward a better future.

In 2022 the pandemic entered its third year, and its impact on the course of economic globalization and multi-polarization was not lost on Sarah Khattab. She used the word solid to describe how China had fought firmly against COVID-19 over the past three years, saying that in doing so it had proven to be highly successful.

Joshua Brown of the US opted for the word dynamic to describe China’s handling of the pandemic. China had adopted dynamic and flexible policies to cope with the ever-changing situation of the pandemic, he said.

Jennifer Holstein, a Gen Zer also from the US, agreed.

“During this year China consulted science and they realized that the Omicron variant is less deadly and more mild. And it made sense now to ease restrictions. And just the period of adjustment is amazing.”

The Generation Z Research Center also conducted a  survey on Gen Zers in 24 countries and regions, including Australia, China, Egypt, France, Russia, South Africa, the United Kingdom and the US, and found that the words of the year that respondents chose were diverse and the respondents’ views on the matter decisive. For example, they used struggle, vitality, prosperity and beauty to describe themselves, their country and their vision of the world. They expressed optimism about the future, even if they indicated that they did not take things for granted. More than 70 percent of the respondents said they believed 2023 would be better than 2022.

Youth Power, organized by China Daily and first broadcast in June 2021, aims to build a global platform of communication and exchange, focusing on the interests and ideas of Generation Z. The program comes in the form of interviews, forums and speeches, with topics related to anything of current interest in the world.