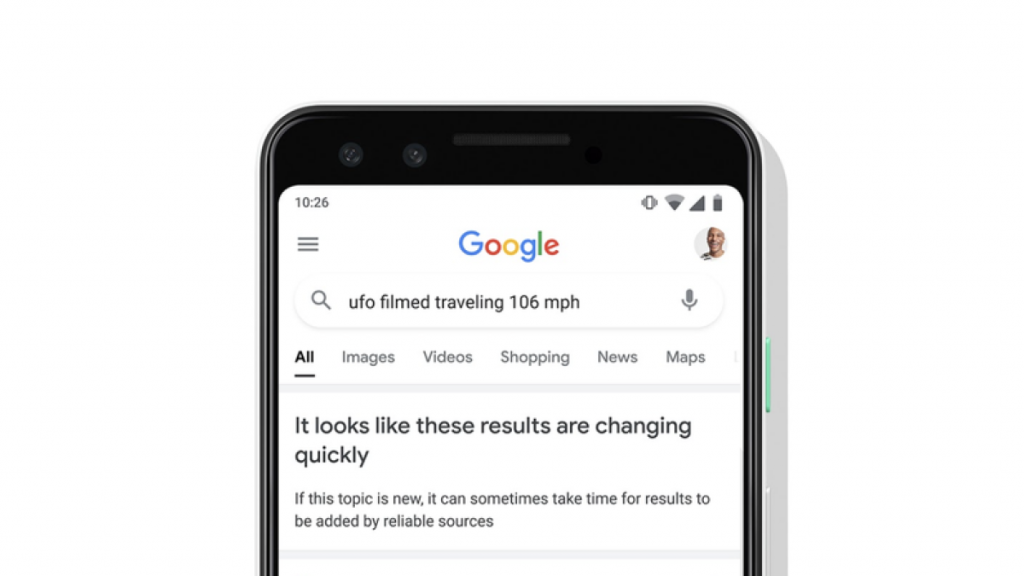 In one of Silicon Valley’s latest attempts to tackle our online misinformation crisis, Google announced a new feature that warns U.S. users about trending topics that don’t have reliable search results yet.

The prompt cautions users that, “it looks like these results are changing quickly,” further explaining that “if this topic is new, it can sometimes take time for results to be added by reliable sources,” according to an image on Google’s announcement published on Friday.

The tool is designed to detect searches on topics that are “rapidly evolving,” like breaking news or other subjects garnering a surge of interest, that “a range of sources” have not weighed in on yet. However, Google’s announcement didn’t say exactly what would be considered a reliable source nor how it’d assess the reliability of said sources.

The danger of online misinformation has been a widespread concern levied against tech companies for many years now. But tech giants like Google (which also owns YouTube) only began treating it as a pressing issue relatively recently, in large part due to COVID-19 misinformation, disinformation around 2020 election fraud, and renewed government scrutiny in the form of anti-trust investigations by Congress.

Google says the feature has been in testing for about a week now, though only for a small percentage of searches, according to Recode. Mashable was not able to independently verify the prompt, despite searching the same topics Google’s search liaison gave as examples to Recode. The examples included a query for a suggested UFO sighting in the UK.

As of this writing, the UFO query directs users to a YouTube video about the alleged sighting, UK tabloids the Sun and Daily Star‘s coverage, and a Verge article covering the new Google feature.

This could in part be due to the topic surfacing four days prior, which perhaps excludes it from being categorized as a “new” topic that’s “changing quickly.” But it does call into question whether the tool does much of anything to help users with “media literacy,” which Google Search public liaison Danny Sullivan described as its intention, in the medium term — as in after a topic starts to trend but before so-called reliable sites provide deeper context (and on some subjects few may ever do so). Other queries listed as examples by Recode include, “why is britney on lithium” and “black triangle ufo ocean.” Mashable didn’t get the new Google prompt for those either.

“Whether you see something on social media or are having a conversation with a friend, you might turn to Google to learn more about a developing issue,” Sullivan wrote in the announcement post. But, “Sometimes the reliable information you’re searching for just isn’t online yet. This can be particularly true for breaking news or emerging topics, when the information that’s published first may not be the most reliable.”

Earlier this year, Google released its About This Result panel beta, which adds context about sources of information that surface in its results. The panel shows a snippet of a Wikipedia entry about a site, if available, to give more context as to what a website is known for.

Both Facebook and Twitter launched similarly well-intentioned tools around online media literacy ahead of the fraught 2020 U.S. election, like labeling posts with “disputed claims” or “misleading information.” However, questions remain about how effective these prompts, labels, and warnings to users about potentially unreliable information actually are.

Still, testing a possible fix is better than nothing. But when it comes to misinformation online, cautionary warnings like Google’s new one may be flimsy bandaids when we’re dealing with a gaping wound.