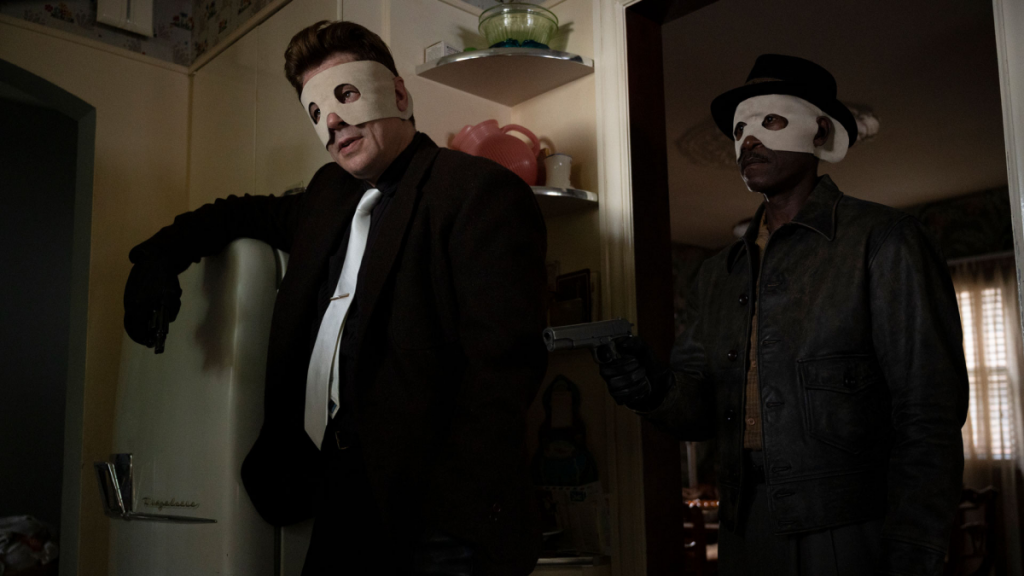 No Sudden Move is a complicated story with the simple premise of a playfully meandering and star-studded caper flick that’s steeped in the vibes of a midcentury film noir.

The ensemble feature directed by Steven Soderbergh and penned by Ed Solomon feels immediately like a creation from the filmmaker who gave the world Danny Ocean. But where Soderbergh’s trilogy of Las Vegas heist adventures mixed the ostentatious style of America’s glitziest city with the cool-guy aesthetics of the Rat Pack, No Sudden Move takes a grimier turn.

Set in mid-’50s Detroit — and shaped by the social and economic forces of that time and place — Solomon’s twisting story opens on a trio of apparently outcast small-time criminals (Don Cheadle, Benicio del Toro, and Kieran Culkin) who are brought together for a simple yet unusually lucrative job: “Babysit” (i.e., watch and, if things go south, kill) a working man’s family while said working man, played by a clean-shaven but rough-edged David Harbour, steals some valuable paperwork from his boss’s office safe.

The “why” of it all is left intentionally hazy by the job’s money man, Jones (Brendan Fraser!). But we learn quickly that Cheadle’s recent ex-con, Curt Goynes, isn’t exactly a favorite of Detroit’s two top-tier crime bosses. Del Toro’s Ronald Russo is in a somewhat similar predicament, though for vastly different reasons. We learn what we need to learn in due time — in fact, that’s part of the fun — but suffice to say that Goynes and Russo, our ostensible stars, are outcasts even in their seedy community of lowlifes and crooks.

A playfully meandering and star-studded caper flick that’s steeped in the vibes of a ’50s film noir.

In other words: The generous haul that this would-be easy job offers is immediately suspicious to both men, but neither one is exactly in a position to say no. Of course, as we in the audience fully expect, and as Goynes, Russo, and their fellow accomplice Charley (Culkin) no doubt realize on some level, this thing that seems way too good to be true is most certainly just that.

I’m being spare with the specifics on purpose. You don’t need to know more about Charley until you meet him. Same goes for Harbour’s Matt Wertz and pretty much everyone else in an “oh wow, that actor is here too?!” ensemble that includes Julia Fox, Craig “muMs” Grant (R.I.P.), Ray Liotta, Amy Seimetz, Bill Duke, and some added surprises along the way.

It’s the kind of story that keeps you guessing right up until the credits roll. Just don’t make the mistake of thinking this is a singular mystery with a definitive “oh shit” reveal at the end. No Sudden Move is less one big surprise than it is a series of miniature, sometimes fleeting character dramas. The specifics that spill out of these moments slowly fill in the bigger picture while also helping us better understand the contours of each character and how they fit into this puzzle.

It’s hard to keep up with at times because there’s just so much going on, and so many small details that circle back around later. Solomon’s script is mostly a success in this regard, though there are limits. The characters and their place within the plot are clear as day by the end, but No Sudden Move also awkwardly crams in reflections on race and class that don’t exactly take us anywhere.

There’s some early tension in Russo’s racially motivated mistrust of Goynes that is, if I’m being generous, quickly relegated to subtext. The larger plot also links up with some of the socio-economic pressures inherent to No Sudden Move‘s setting — the financially booming but deeply segregated space of post-World War II Detroit — but it’s a weak link, fueled entirely by a tangential bit of dialogue in an early scene that is then indirectly referenced again just ahead of the climax.

Fans of the Ocean’s trilogy may miss the patter and style that Soderbergh infused into those capers, but the filmmaker is clearly having a different kind of fun here. The entire movie is shot with an old-timey fisheye effect, distorting the edges of every frame in way that’s vaguely (and, without a doubt, intentionally) disorienting. Soderbergh, who is his own cinematographer (credited under the pseudonym Peter Andrews), also frequently employs canted angles and artful framing to further heighten the increasingly out-of-control plot.

The Ocean’s movies gave us a Soderbergh delightedly toying with heavily stylized musical montages and rapid-fire banter, an approach that perfectly fit the trilogy’s neo-Rat Pack vibe. Here he’s digging even further back into cinema’s history, drawing on the likes of Hitchcock and Jules Dassin to deliver a world that fully sells the ever-shifting lineup of unreliable narrators.

In the end, it’s really No Sudden Move‘s consciously designed and executed aesthetic qualities that makes an otherwise slow-to-develop plot feel engaging. Soderbergh and Solomon are a slick marriage of style and substance, with the former’s fancy filmmaking propelling a story from the latter that’s short on suspense but wrought with surprising twists and turns. Round it all out with a thrilling cast of familiar faces and a soundtrack of smokey, meandering jazz music and you’re left with an all-around winner.

No Sudden Move is in theaters and on HBO Max.