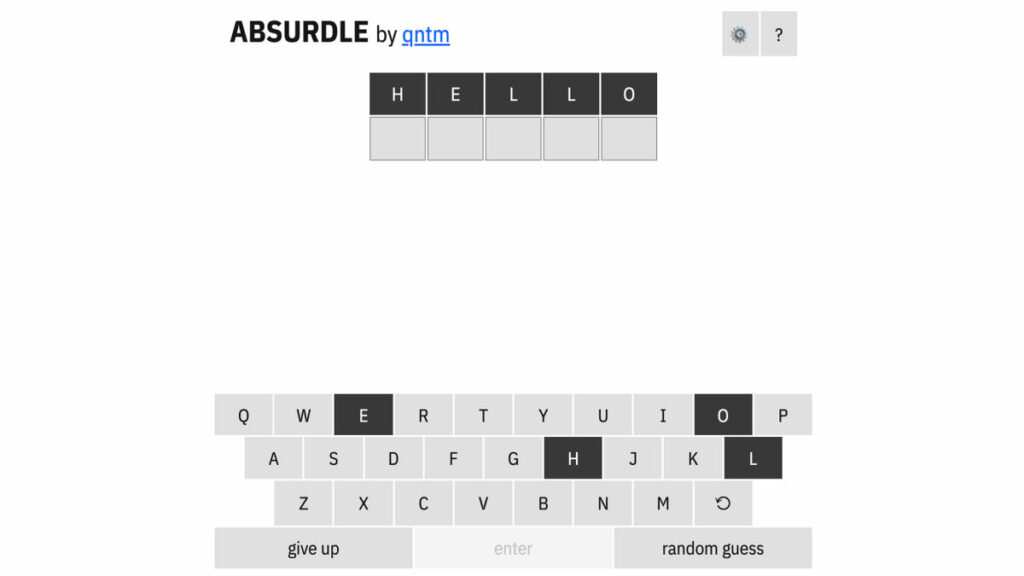 The phenomenon relates to a daily game called Wordle created by software engineer Josh Wardle — an addictive puzzle that involves six tries at guessing a secret five-letter word, with clues coming in the form of the colour your letters turn after you’ve entered your guess (orange means a correct letter in the wrong place, green a correct letter in the right place, and grey a letter that’s not in the word at all).

It sounds a little complicated, but the game is simple enough once you give it a go — which is more than can be said for Absurdle, a recent head-scratching spin-off created by pseudonymous coder qntm.

Created 10 days ago (but picking up steam ever since), Absurdle mimics the surface gameplay of Wordle (there’s a grid, five-letter word guesses, and clues in the form of coloured letters) only with a devilish twist: Instead of starting with a secret word that players work their way towards, Absurdle doesn’t have a single word up its sleeve. The game starts with 2,315 possibilities and responds to each of your guesses by keeping the maximum number of potential secret words in its back pocket, forcing you to narrow its options down until you essentially trap the AI into only having one word left.

Yes, so were we. Here’s an example of a game we played earlier which we ended up giving up on after five guesses:

So essentially the first guess you take will always be fully greyed out, because the game is trying to make things as hard as possible as you frantically scour its 2,315-word arsenal for options that don’t match any of the letters you’ve picked.

The one helpful thing is you can see the letters you’ve already used in the keypad below the game grid, allowing you scout through the remaining options and frantically try to think what five-letter words you can use that only have a single vowel in them.

If you’re interested, the full methodology of the game is broken down in more detail on qntm’s website — or you can dive straight in and have a go yourself here.

Will Absurdle rival the wild popularity of Wordle? Given how much of a big meanie it is, probably not.

But attempting to trap the software in as few guesses as possible is certainly a fun — albeit head-scratching — distraction.