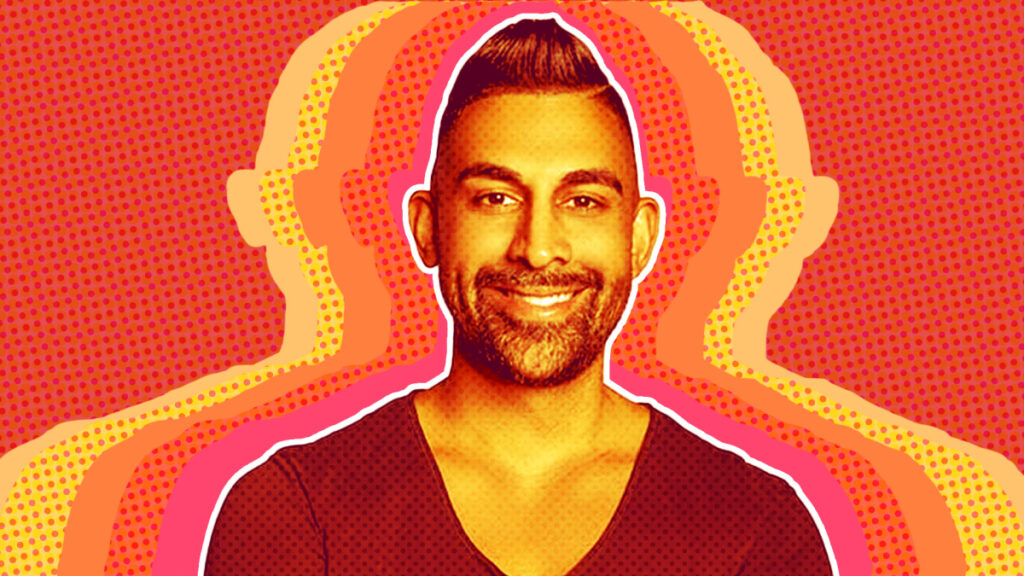 Mann signs off many of his uber-popular inspirational videos with this promise. With 27 million Facebook followers and nearly 14 million YouTube subscribers, he’s garnered a massive audience in just three years of producing this “life-changing” content. The videos follow a formula: A villain (maybe an unappreciative spouse, or school bully, or a Karen) learns the error of their ways, often by getting the tables turned on them.

While his followers — and actors — love him, Mann is also the subject of internet ridicule due to the videos’ simplistic dialogue, stereotyped characters, and clickbait titles. What the haters don’t realize is, that’s all part of Mann’s carefully-crafted secret sauce.

A bullseye for cringe

Mann’s clickbaity titles are ripe for Facebook sharing, as evidenced by the very first one: Before You Take Someone for Granted…Watch This.

In the video, a daughter dismisses her mother and chooses to spend time with friends and dates. This happens over the course of their lives (distilled into four minutes), until the elderly mother dies and the daughter finally realizes she should’ve appreciated her more. Actor Riki Yvette Westmoreland, who played the mother in this video and went on to act in many more of Mann’s videos, told Mashable that she thought the script was beautiful. Others seemed to agree: The clip has over 10 million views on Facebook and over 4 million on YouTube, albeit it has a slightly different title on YouTube. The Facebook video has almost 8,000 likes and 660 mostly glowing comments speckled with crying and heart emoji, and the YouTube video has 84,000 likes and 5,200 comments of the same ilk.

Mann’s work has evolved over time, but his modern parables, including this mother-daughter scenario, all have the same pillars: a simple, somewhat universal story, dialogue to match, a life lesson, and a lack of nuance.

For fans, the lesson is more than enough.

“Watching his videos truly makes you want to be a better person,” said Kimberly, a 42-year-old fan in California. “I can sit and binge watch his videos, tears of happiness and sadness come flowing, but the heart is always so full.” Kimberly, like other fans interviewed, requested to go by her first name only as she worried about her privacy.

Anderson, an 18-year-old viewer in Australia, agreed. “I find Dhar Mann’s videos really touch on issues that sometimes aren’t brought to light as much as others in this day and age,” he said. “I’m always impressed by how well they convey their messages — even with touchier subjects.”

Others, however, are stupefied by how much the videos resonate with viewers — even people who eventually went on to work with Mann.

When actor Mair Mulroney first read a Dhar Mann script, she was confused by the simplicity. “I remember thinking like, ‘I don’t think I would ever actually say it like this,'” she said.

Fellow actor Katherine Norland, who’s appeared in the most Dhar Mann videos out of any other performer (over 120), said early videos reminded her of visual sermons crossed with industrial videos, which are used for workplace trainings like sexual harassment prevention — or after-school specials.

The videos are as easily primed for roasts as Facebook shares. Commentary channels, run by YouTube creators that react to other people’s content, often target Mann’s videos. They find the videos trite, contrived, and cartoonish. And yet, his overall video views keep climbing, with a noticeable jump this year, according to analytics firm SocialBlade, which also estimates Mann nets at least $1 million annually.

“They’re all about shit you learn in kindergarten.” – YouTuber Cody Ko

Cody Ko, a YouTube creator who’s gained millions of subscribers through his commentary, used to criticize Mann’s videos, until he worked on one himself. Cody Ko, whose real last name is Kolodziejzyk, first reacted to the Dhar Mann YouTube channel in a 2019 video as a part of his “THAT’S CRINGE” series, and then made another video about Mann the following year.

“They’re all about shit you learn in kindergarten,” Cody Ko said of Mann’s videos in his 2020 follow-up, “like be nice to people and don’t steal.”

Mann is well aware of the cringe commentary, actors who’ve worked with him told Mashable, and laughs along with it. Perhaps one reason is because the videos are uncomplicated and overacted by design. Mann didn’t respond to our interview requests.

After Cody Ko’s second video, Mann DMed him and asked if he ever wanted to work together. Cody Ko took him up on the offer and produced a video with Mann’s team in August 2020. (The studio kept up production despite COVID, but Mulroney said the crew encouraged social distancing and wearing masks except when actively eating, drinking, and filming. Mulroney didn’t say whether testing was required.) Cody Ko then released a video on the “Dhar Mann experience,” complete with screenshots and interview footage.

In the latter, Mann explained to Cody Ko that his audience includes people who speak English as a second language, Deaf people, and children.

“Those things I would’ve never considered,” Cody Ko told Mann. “It’s easy for me to sit here and be like, ‘Why is he just spewing out the message? He’s spoon feeding his audience,’ but…there are people that legitimately don’t speak English who need sentences like that to really understand what’s going on.”

He said working with Mann’s team was humbling, as he previously tore apart videos they worked on, and that he left the experience with a new friend. He didn’t respond to Mashable’s request for comment, either.

Mulroney’s confusion about the script also dissipated when she realized how broad the Dhar Mann audience is. The dialogue, and the subtitles, are simple and the actors’ movements are exaggerated so people can visually tell what’s going on, she said. This is to the benefit of Mann’s Deaf and ESL fans.

Furthermore, the wider the audience, the more potential subscribers. Considering how each video view count is in the seven or eight figures, the strategy seems to be working. Mann isn’t the first creator to benefit from inspirational “life lessons” — motivational vlogger Jay Shetty has been producing similar videos for years — but Mann’s become very well-known in the genre.

When videos calling his content cringe started emerging, Mann brushed it off and said the videos aren’t for everybody, Mulroney claimed. She said the Cody Ko collaboration shows “a lot about just the type of person that [Mann] is.”

Some fans, like Anderson, decry the cringe descriptor. “I understand that sometimes the actors can seem a bit amateur,” he said, “but in the end the message is why you’d watch the video, not so much how it’s presented.”

People who refer to his videos as “cringe” have either never been in a situation portrayed in the video, or they’re the people that need the lesson, said Kimberly. “They are the bully behaviors Dhar Mann is trying to combat.”

Others don’t mind — in fact, they embrace it. Joey, another 18-year-old fan in Indiana, said the “cringey parts” of the videos make them more enjoyable because, he believes, they could happen in real life.

Westmoreland doesn’t mind cheese, either. Some people call Dr. Who cheesy, she said, but she loves that show too.

Those criticizing Mann in reaction videos do it for the views, Norland said, and don’t understand the fast-paced cadence the studio operates under. “It’s not going to be Oscar-worthy,” she said.

His business partner sued him not long after in 2011 over unpaid debts, as reported by the New York Times. Mann countersued and won, but was then slammed with five felony counts of defrauding Oakland, where he rented a warehouse to grow cannabis; he allegedly pocketed more than $44,000 he received in city redevelopment grants. Mann was fined $37,000 but told the Times the conviction was later expunged.

As Mann has explained on his website and in interviews like on the 2X eCommerce Podcast (without the fraud details), this was his lowest point. He rebounded, however, when he met a makeup influencer in 2015 and developed LiveGlam, a makeup subscription service. It’s unclear who that influencer was, but he and his wife, Laura Avila, are currently listed as the company’s co-founders on its website. Last November, the couple bought a $15.5 million mansion from Khloe Kardashian, who sent flowers to Avila for her birthday soon after. When the couple met, Mann was sharing a 350-square-foot apartment with a roommate, he said in an Instagram post.

Norland called Mann’s success “a Cinderella story.” She told Mashable she’s read a bit about the legal troubles on Mann’s website, but he doesn’t explicitly mention the charges, nor his past career as a weed entrepreneur. Another actor, Vinn Sander, said he didn’t know about the charges — but that Mann seemed to have moved on to bigger and better things.

Viewers aren’t letting the allegations stop their fandom. “Truly shocks me,” said Kimberly about the charges, “but sometimes you have to hit rock bottom before you can truly find your light.”

“I’ve not only witnessed and watched the birth of a whole empire,” Westmoreland told Mashable, “I’ve had the opportunity to play a role, be a part of it and that growth.”

Norland herself often plays a Karen-like villain, and described the simplicity the performance requires. “[Mann] doesn’t love the full-bodied acting experience, especially if you’re playing a bad guy,” she said.

Actor Pedro Figueroa, who acted in Mann’s videos in 2018 and 2019 but has since moved onto other projects, said he always played the “bad guy,” like an ungrateful husband.

Despite the performance restraints, actors enjoy being a part of the “Dhar Mann fam.”

“I really love the productions, I love who I get to work with every day,” said Mulroney. “It’s something like a family.”

All the actors Mashable spoke to said there’s a different feel shooting for Mann than other directors. For Norland, Mann’s laid back and casual environment is a stark contrast to hustling Hollywood sets. Instead of an assistant director yelling at everyone to get on set right away, Mann’s production crew doesn’t have a problem giving her five more minutes to fix her hair and makeup.

“It’s actually been a refreshing breath of fresh air,” she said.

Another benefit to being a Dhar Mann actor? The fans.

Mulroney and Norland said they’re recognized all the time. “You can’t go anywhere,” joked Mulroney. Norland herself is primarily stopped by children. She has one green and one blue eye, a condition called heterochromia, and they recognize her even in a mask.

Other fans take it to the DMs, where they tell Mann’s actors (and the Mann himself) about how much they’ve impacted their lives for the better.

Even two years after Figueroa’s last video with the studio, he still gets messages from fans asking when he’s going to do one again. As Figueroa always played the bad guy, fans also message him when they watch his other work because they’re surprised that he’s “not always the bad guy.”

Some DMs are heartwarming — or heart-wrenching, and they flood inboxes by the dozens or hundreds a day. “The messages and the emails that I get from people sometimes have me in tears,” said Westmoreland, echoing what other actors said. Fans have told the actors they decided to work on their marriage because of one of Mann’s videos, or even that they reconsidered killing themselves.

For all the hate about clickbait titles and basic dialogue, Mann clearly has dedicated fans. He continues to drop content week after week, and is branching out into longer formats. This Thanksgiving, the channel released its first feature-length film: Girl Finds Out She’s Adopted. Norland, who played the titular girl’s mother, said there are more feature-length projects in the works.