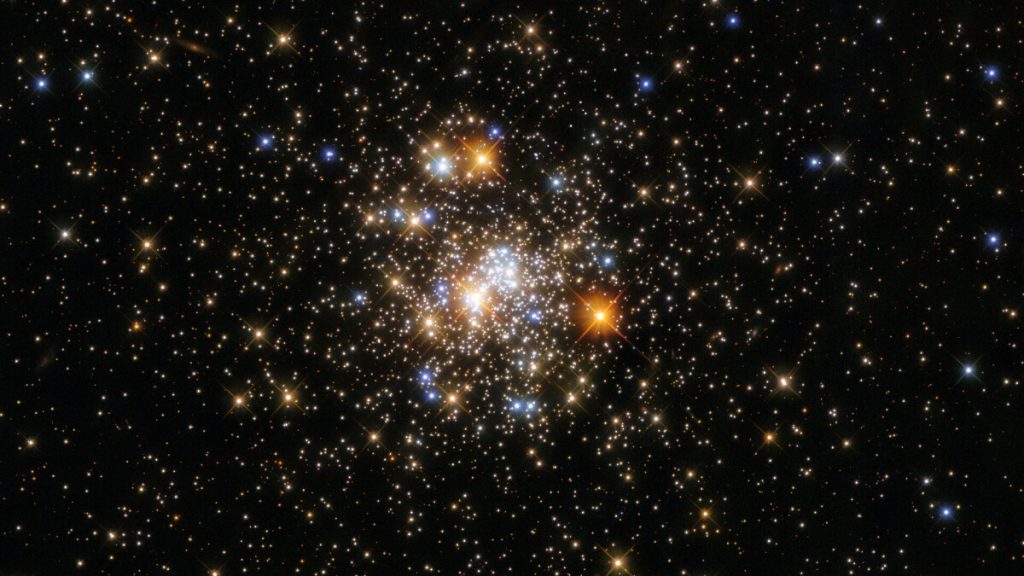 Hubble zooms in on a dazzling cluster of colorfully twinkling stars

Hubble’s latest image share is a good one for fans of cosmic razzle-dazzle.

You’re seeing NGC 6717, a globular cluster that forms a piece of the constellation Sagittarius. But where it appears to you, a person on the ground staring up at the sky, as a pinprick of light amidst other pinpricks of light, to Hubble it’s something much more magnificent.

Not every point of light you see here is part of the globular cluster, but it’s all gorgeous.
Credit: ESA/Hubble and NASA, A. Sarajedi

A globular cluster is like a little miniature galaxy. It’s a collection of stars, sometimes numbering in the thousands, that are gathered together in a roughly spherical formation. They’re held together by immense gravitational forces that often make a cluster’s central region more densely packed.

This particular image is a beautiful yet imperfect look at NGC 6717. While most of the points of light you see are part of the cluster, the brightest spots in the center of the image are stars that sit directly between NGC 6717 and Hubble’s view of it from Earth’s orbit.

You can tell which ones are in the way by their distinctive diffraction spikes (i.e. the long jets of light criss-crossing some of the stars). These spikes form, NASA notes, when the light released by each star “interacts with the structures supporting Hubble’s secondary mirror.”

Capturing an image of NGC 6717 is complicated by the fact that the Sagittarius constellation sits in the same region of the sky as the center of our galaxy, the Milky Way. The galaxy’s center is filled with “light-absorbing dust and gas” that makes capturing this globular cluster more challenging.

If you’ve seen our looks at other Hubble images, you’ve definitely read about its Wide Field Camera 3, which was added to the orbital telescope decades into its life, in 2009. This look at NGC 6717 is a composite of imagery captured by WFC3 as well as Hubble’s Advanced Camera for Surveys, a 2002 upgrade that looks at visible and red wavelengths in large stretches of sky.