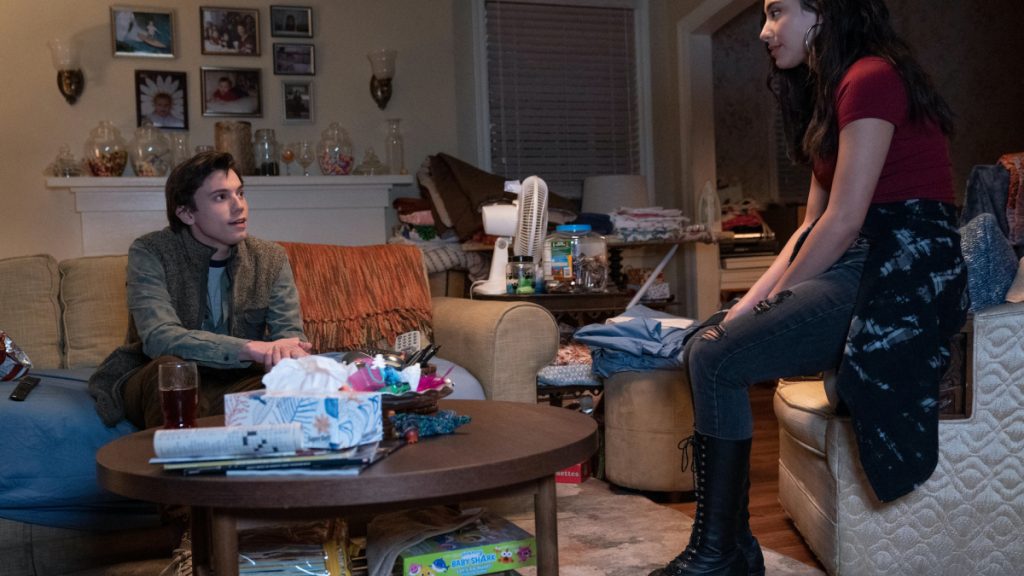 There is nothing inherently wrong with the common and recognizable “standards” of romance writing — also known as tropes. Tropes are fine, they’re very fun, and let’s be honest, there are only a grab bag of original story beats to choose from and every romance is a combination of those beats. Tropes do get in the way when they play into harmful stereotypes or force characters into incongruous situations, which makes the proper application of archetype the real challenge of writing romantic stories. Love, Simon on Hulu has been a masterclass in assembling and dissembling tropes since its first episode, but in Season 2 it wholeheartedly embraced one that could be problematic and made it one of the show’s most adorable moments so far: the Crush On Brother’s Best Friend/Crush On Best Friend’s Little Sister trope.

In Love Victor, the brother is Victor (Michael Cimino), his younger sister is Pilar (Isabella Ferrreira), and Pilar’s love interest is Felix (Anthony Turpel), Victor’s best friend. Oftentimes the best friend’s little sister in these pairings is pining after an age-inappropriate boy to comic effect, or the best friend in question freaks out about finding someone he thought of as “little” suddenly attractive. Pilar is only one grade younger than Victor and Felix, which eliminates any of the age issues that might have come into play, but the way Love, Victor works with this trope goes beyond making it less weird or cutesy. The BBF/BFLS thing works here because of the trope-smashing buildup to Felix and Pilar’s happy ending.

Love, Victor could have easily stumbled by making Pilar’s crush on Felix an example of a quiet girl crushing on a queen bee’s boyfriend, but Pilar and Felix’s relationship stems from a chill, natural realization that spending time together is better that spending time with almost anyone else. Instead of falling back on a pining archetype, Pilar immediately confronts Felix about her growing feelings and sets reasonable boundaries when he initially doesn’t return them. Her speech in which she tells Felix that she doesn’t want to be friends with him because she likes him too much is an honest rejection of the idea that young women should ignore their emotional well-being to make other people feel better, and her example is one that Felix learns to follow when he breaks up with his girlfriend Lake.

Speaking of Lake, Love, Victor avoids another trope by swerving around the possibility of another drawn-out love triangle by bringing Felix and Lake’s relationship to a sensible end before Felix realizes he shares Pilar’s feelings. Their breakup isn’t a massive, dramatic blowout; Lake made a morally correct choice to report Felix’s mother to CPS and even though it led to an improvement in Felix’s quality of life, the pain he experienced in the meanwhile made it impossible for Felix to untangle his negative emotions from her their relationship. No one was right or wrong, and their fundamental incompatibility doesn’t cast a pall on Felix and Pilar’s future romantic endeavors.

Similarly, Felix’s necessary conversation with Victor about having feelings for Pilar swerves away from the typical “ew, you like my sister” tradition by extending the frankly amazing maturity of the Salazar siblings to Victor’s response. It never occurs to Felix to hide his feelings from Victor or that telling him would risk their friendship, and the closest the conversation comes to crossing a line is when Felix says Pilar is hot — a line which Victor promptly transforms into a boundary with “I’m being really cool right now, don’t push me.” Love, Victor has always been good with examining friendships between straight and gay characters, and from here it’s clear that no trope can come between Felix and Victor’s solid relationship.

There are many moments this season that make Pilar and Felix a good future couple. Pilar is nonjudgemental and helpful in a way that doesn’t require Felix to jump through hoops, like when she hands him the money she’d saved for Billie Eilish tickets to help him with rent and tells a white lie to make it less of a big deal. Felix is a dedicated friend who’s learned that his admitted “stressed and desperate” approach to dating is not okay, and he becomes the person Pilar fantasized about back in Season 1 — someone she could get coffee, hang out, and watch reality shows with.

By the time Love, Victor shows Felix and Pilar scoring against each other in a homebrewed Who Wants To Be A Millionaire competition, the writing for their compatibility is right there on the wall. He’s her brother’s best friend. She’s his best friend’s little sister. Can they make it any more obvious?